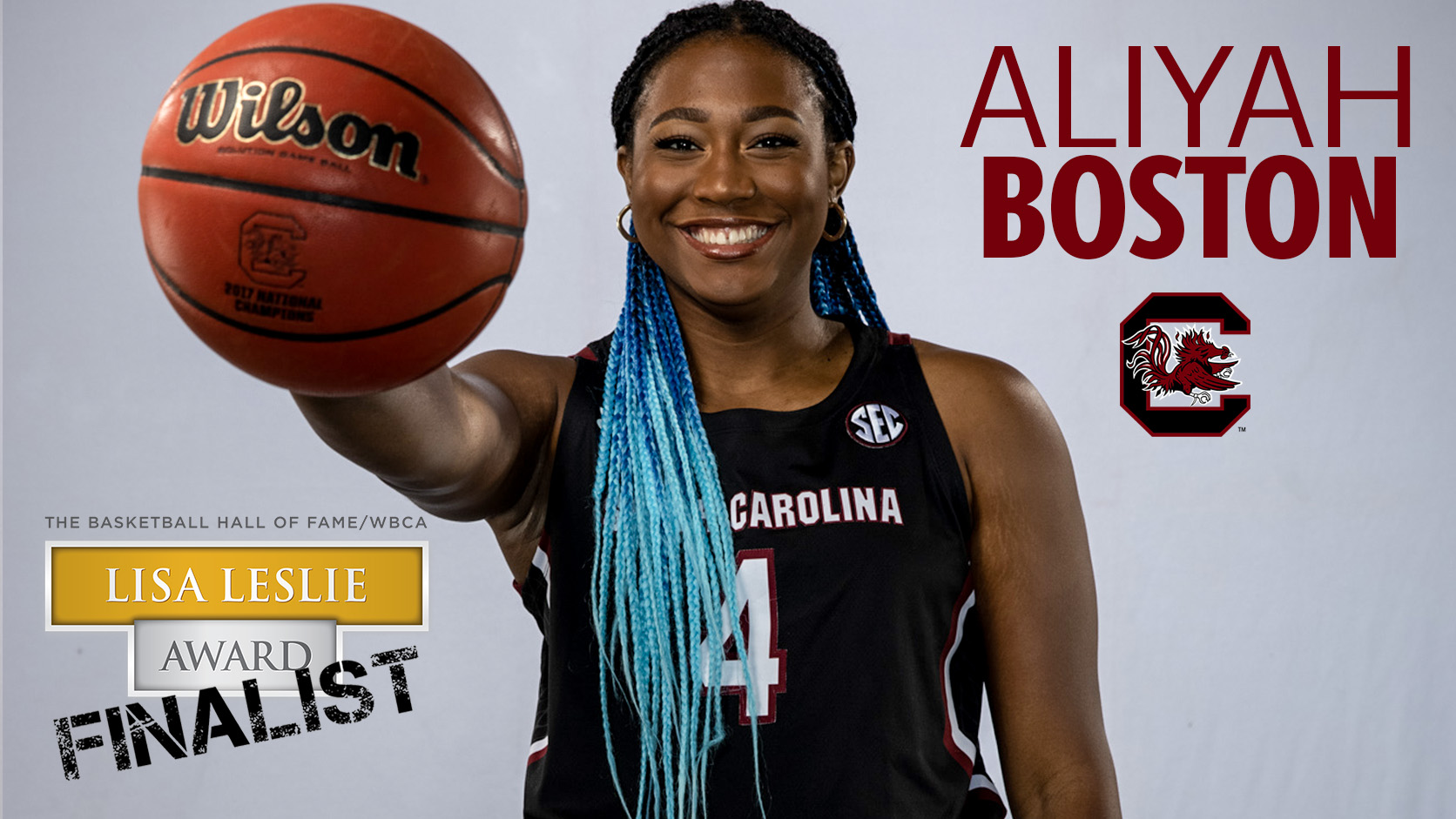 Share
COLUMBIA, S.C. – After winning the award last season, South Carolina sophomore Aliyah Boston is one of five finalists for the 2021 Lisa Leslie Award, the Naismith Memorial Basketball Hall of Fame and the Women’s Basketball Coaches Association announced today. Named after the three-time All-American, 1994 National Player of the Year and Class of 2015 Hall of Famer, the annual award in its fourth season recognizes the top center in women’s NCAA Division I college basketball.

The SEC Co-Defensive Player of the Year and an All-SEC First-Team selection, Boston is on every current national player of the year watch list heading into the postseason and is still in contention for the Naismith Defensive Player of the Year as well. She has been particularly dominant in SEC games, especially on the glass with double-digit rebounds in 15 of 16 league games this season. Her 12.3 rebounds per SEC game is a new South Carolina record as is her 62 offensive rebounds in league action. Her 25 career double-doubles include 16 in SEC action, including nine this season alone, which is one shy of the school record. Boston’s 3.6 blocked shots per SEC game this season are also a program record, and her 93 career blocks in SEC games is already second in school history. On the season, Boston’s ranks 12th in the nation in blocks per game (2.9), 13th in rebounds per game (11.7) and 19th in offensive rebounds per game (3.9). She averages a double-double overall (13.0 ppg/11.7 rpg), against SEC opponents (13.3 ppg/12.3 rpg) and in the Gamecocks’ 11 games against ranked opponents (13.5 ppg/12.1 rpg).

This month, the five finalists will be presented to Ms. Leslie and the Hall of Fame’s selection committee. The winner will be determined by a combination of fan votes and input from the Basketball Hall of Fame’s selection committee. Naismith Starting Five Fan Voting presented by Dell Technologies will go live on Fri., March. 5, on HoopHallAwards.com.

The winner of the 2021 Lisa Leslie Center of the Year Award will be presented on ESPN, along with the other four members of the Women’s Starting Five. Additional awards being presented include the Nancy Lieberman Point Guard Award, the Ann Meyers Drysdale Shooting Guard Award, the Cheryl Miller Small Forward Award and the Katrina McClain Power Forward Award, in addition to the Men’s Starting Five. Additional information about the award presentation, including date and time, will be released in the coming weeks.

The No. 7 Gamecocks (19-4, 14-2 SEC) earned the second seed in this week’s SEC Tournament in Greenville, S.C. South Carolina will take on seventh-seeded Alabama on Fri., March 5, at 6 p.m. on SEC Network.