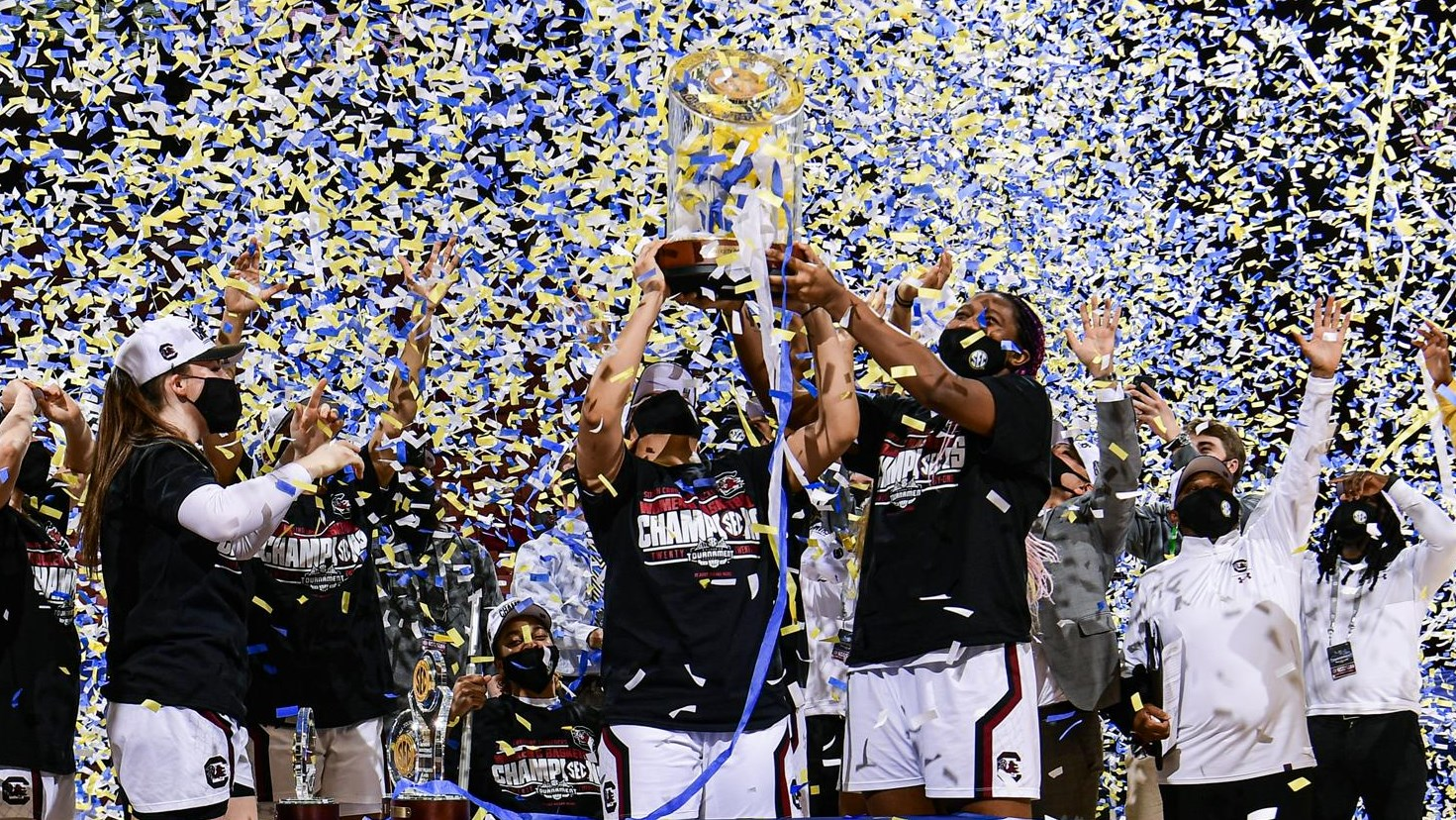 GREENVILLE, S.C. (AP) South Carolina made history Sunday and so did the Southeastern Conference with the first championship matchup featuring Black head coaches in the Gamecocks’ Dawn Staley and Georgia’s Joni Taylor.

It was Staley’s Gamecocks who used a late run in the third quarter to take control and held on to beat the 16th ranked Bulldogs 67-62 – continuing their unprecedented run of six SEC tourney titles in seven seasons.

Taylor was disappointed at the result, not the statement made by the two women leaders. She remembers as a high school start in Mississippi that she never saw two Black head coaches in a Power Five conference title game. Taylor is grateful young people have a different image going forward.

”You can’t dream what you can’t see,” said Taylor, in her sixth season at Georgia.

Aliyah Boston had 27 points and 10 rebounds to lead South Carolina, which only a week ago lost at No. 2 Texas A&M and watched the Aggies cut down nets in celebration of the SEC regular-season crown.

”We knew we didn’t want to lose,” said Boston, the tournament’s MVP with three double-double performances.

The Gamecocks (22-4), twice the country’s No. 1 team this season, struggled down the stretch with three losses in their last seven games.

South Carolina, though, righted things in a big way at the SEC Tournament. It used big early runs to put away Alabama on Friday and No. 14 Tennessee on Saturday night to advance. This time, the Gamecocks broke open a tie game with a 9-0 run to close the third quarter.

The Bulldogs closed to 65-62 on Que Morrison’s 3-pointer with 14.4 seconds left. Boston then followed with a pair of foul shots and South Carolina held on for its 14th straight victory over Georgia.

That Gamecock streak included eliminating the Bulldogs from four of the last five tournaments.

Morrison had 20 points to lead Georgia.

Henderson had 18 points for South Carolina.

The Bulldogs found some hot shooting of their own – they made nine of 15 shots – for a 23-17 lead after one quarter.

But when Jenna Staiti picked up her second foul at the end of the first quarter, South Carolina found Boston down low. Boston scored eight of her 14 first-half points in the period as the Gamecocks erased Georgia’s deficit.

It looked the Bulldogs would hang on for a lead at the half before Cooke held for a final shot and drained a 3-pointer as time ran out to send the game to the break tied at 35-all.

Georgia reached its first tournament final since 2004 with a victory over No. 17 Kentucky on Friday and an upset of top-seeded and No. 2 Texas A&M where it rallied from five-points down in the second half.

Staiti was upset by the loss, but expects the team to regroup. ”It hurts,” she said. ”It’s not the way we want it go down. But we can put it in perspective with any team in the country,”

THE BIG PICTURE
Georgia: The Bulldogs have experience and depth and should be a difficult match for any team in the NCAA Tournament. The one thing they’ll have to wait until next season to discover: A way to get past what’s become their nemesis in recent years in South Carolina.

South Carolina: It didn’t take long for the Gamecocks to assert their dominance once more on the SEC. Boston and Cooke are playing at high levels and, even if South Carolina misses too many layups and short jumpers for Staley’s liking, will be a threat for the national title in a few weeks.

GAMECHANGER
Struggling to find any breathing room against the Bulldogs late into the third quarter, junior Destanni Henderson sank a jumped with 3:14 to play in the period to kickstart a 9-0 South Carolina run in which Henderson and sophomore Brea Beal accounted for all nine points to give Carolina the lead for good.