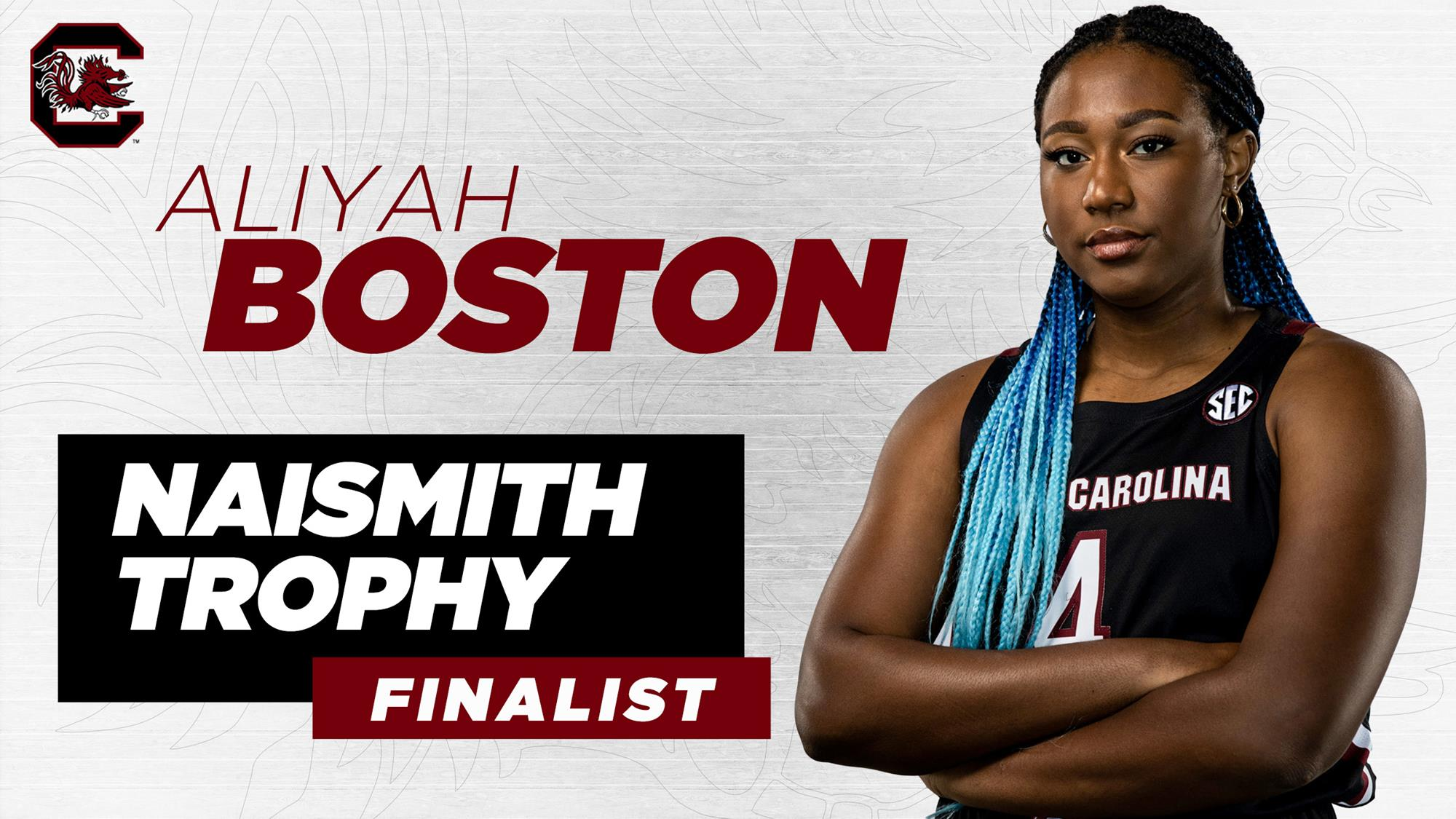 COLUMBIA, S.C. – South Carolina women’s basketball sophomore forward Aliyah Boston is one of four finalists for the 2021 Jersey Mike’s Naismith Trophy, the Atlanta Tipoff Club announced today. It marks the sixth time in the last seven seasons that a Gamecock has been a finalist for the award.

Boston picked up First-Team All-America honors from the Associated Press and ESPN.com in the last week as she capped her second SEC season with All-SEC First-Team and co-Defensive Player of the Year recognition. Her 15 double-doubles rank ninth in the country and include eight against nationally ranked opponents. She is among the nation’s top 15 in blocked shots per game (2.85, 12th) and rebounds per game (11.7, 14th), and she is 18th in offensive rebounds per game (4.0).

Boston has been the anchor for the Gamecocks all season and continues to step up her game. Her 19.3 points and 11.3 rebounds per game in the SEC Tournament led South Carolina to its second-straight title and sixth in the last seven seasons. She extended her double-doubles streak to four straight games and was named SEC Tournament MVP in the process.

On the season, Boston averages 13.7 points and 11.7 rebounds. Her output increases against ranked opponents to 14.7 points and 11.8 rebounds per game. With eight games of four or more blocked shots, including the program’s first triple-double against an SEC opponent and first against a ranked opponent (vs. Georgia, Jan. 21), Boston is also a semifinalist for Naismith Defensive Player of the Year and a finalist for the Lisa Leslie Award, which she won last season.

The other three finalists for the Naismith Trophy are Paige Bueckers (UConn), Dana Evans (Louisville) and Rhyne Howard (Kentucky).

The finalists emerged from a group of 10 semifinalists and were selected by the Atlanta Tipoff Club’s national voting academy, comprised of leading journalists from around the country, current and former head coaches, former award winners and conference commissioners, all of whom base their selections on outstanding on-court performances during the 2020-21 regular college basketball season. The next round of voting runs from March 19-31, with the winner being announced live on CBS Sports Network’s NCAA March Madness 360 studio show on April 3.

Once again, fans will have a say in who wins the top honor by participating in the Naismith Awards Fan Vote presented by Jersey Mike’s. By visiting naismithfanvote.com from March 19-31, fans will have the opportunity to cast a ballot daily for the Jersey Mike’s Naismith Trophy for Men’s and Women’s College Player of the Year and the Werner Ladder Naismith Coach of the Year awards. There will also be opportunities to vote for your favorite women’s player on the @NaismithTrophy Twitter page. The fan vote will account for five percent of the overall vote, which will be tabulated and certified by Aprio, a premier CPA-led business advisory firm, headquartered in Atlanta.