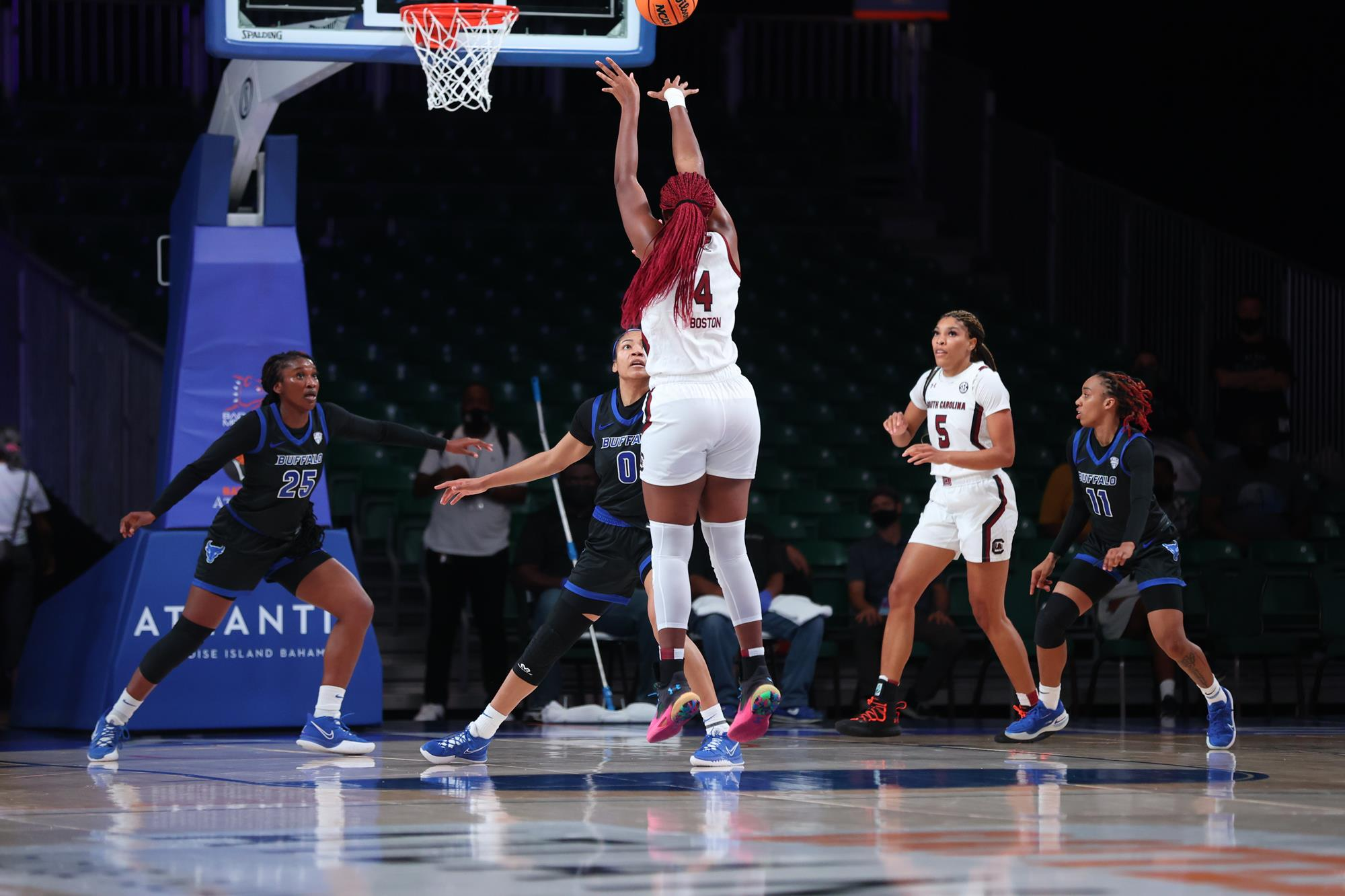 Boston leads No. 1 South Carolina to 88-60 win over Buffalo

by By DOUG FEINBERG

PARADISE ISLAND, Bahamas (AP) – Aliyah Boston scored 19 of her 23 points in the first half and top-ranked South Carolina beat Buffalo 88-60 on Saturday night in the opening round of the inaugural Battle 4 Atlantis tournament.

Kamilla Cardoso, who transferred from Syracuse in April, had her best game of the young season for the Gamecocks, adding 12 points, 10 rebounds and six assists. The 6-foot-7 ACC freshman of the year last season complemented Boston well.

The Gamecocks (4-0) led by three after one quarter before extending the advantage to 45-33 at the half. Boston had 11 points in the second.

South Carolina used its size to pull away in the third quarter, and outrebounded the Bulls 49-26.

The Gamecocks shot a sizzling 65% from the field in the second half and 58% for the game.

Buffalo: This tournament will give the Bulls much needed experience against Power Five schools. Buffalo was the only mid-major program invited to the Battle 4 Atlantis. The Bulls played South Carolina two other times in school history, the last one coming in the Sweet 16 in 2018 – a Gamecocks win.

South Carolina: The Gamecocks didn’t get much out of second-leading scorer Zia Cooke, who came into the game averaging 13.3 points. She finished with four.

LIFT AS YOU CLIMB

South Carolina coach Dawn Staley feels that her Buffalo counterpart Felisha Legette-Jack deserves another chance at a Power Five school if she wants it. Staley has been advocating for more coaching opportunities for Black women. Legette-Jack coached at Indiana before being let go and taking over at Buffalo, where she’s guided the team to its first-ever Sweet 16 in 2018 before losing to the Gamecocks.

UP NEXT
The Gamecocks will square off with No. 9/9 Oregon in the next round of games at the Bad Boy Mowers Women’s Battle 4 Atlantis on Sun., Nov. 21. Tipoff on FloHoops is set for 2:30 p.m. ET. It will be the Gamecocks’ second top-10 opponent in five games this season.