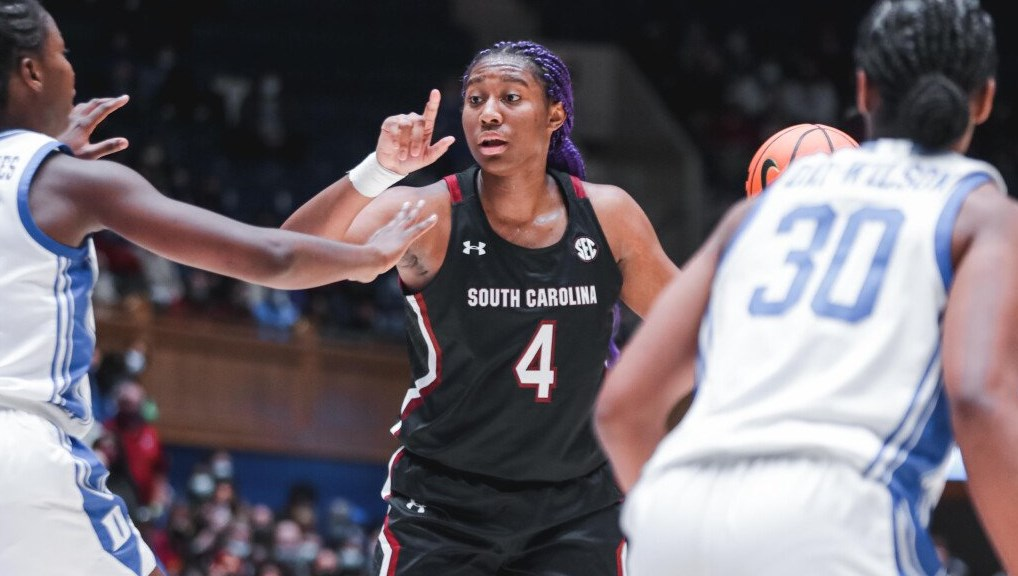 by By AARON BEARD / AP

South Carolina finished with a 45-25 rebounding advantage that included 19-5 on the offensive glass, leading to a 17-4 edge in second-chance points. That helped offset 35% shooting to secure the team’s fifth win against an opponent ranked 15th or better in the AP Top 25 this season.

Duke trimmed a 16-point deficit to 42-35 early in the fourth period, but South Carolina (11-0) responded by scoring on five straight possessions to stretch the margin back out to 15. Three of those baskets came inside from the 6-foot-5 Boston, a preseason Associated Press All-American who found herself facing frequent double teams.

Shayeann Day-Wilson scored 17 points to lead the Blue Devils (8-1), who relied on an active zone to collapse when the ball entered the paint. The defense made South Carolina work, but the offense struggled to get going.

Elizabeth Balogun hit a 3-pointer on the first possession, but Duke then missed 10 straight shots in an eight-minute scoreless streak that pushed South Carolina to a 17-3 lead.

Duke twice got as close as seven, the last at 53-46 on a four-point play from Day-Wilson with 19.1 seconds left.

Duke shot just 29% in the first half, including 2 for 12 from 3-point range, and finished the game at 34%. In addition, the teamwide rebounding effort that second-year coach Kara Lawson had hoped for didn’t materialize until after South Carolina went up big.

Duke fell to 3-11 against No. 1-ranked teams, losing for the sixth straight time since beating Maryland in January 2007.

UP NEXT
After two top-15-ranked opponents in a span of three days, the Gamecocks will have a break before their next outing. The non-conference schedule closes out on Dec. 21, when Stanford comes to Colonial Life Arena for a 2021 Final Four rematch. The Tuesday game will be a 7 p.m. tip, airing on ESPN2.