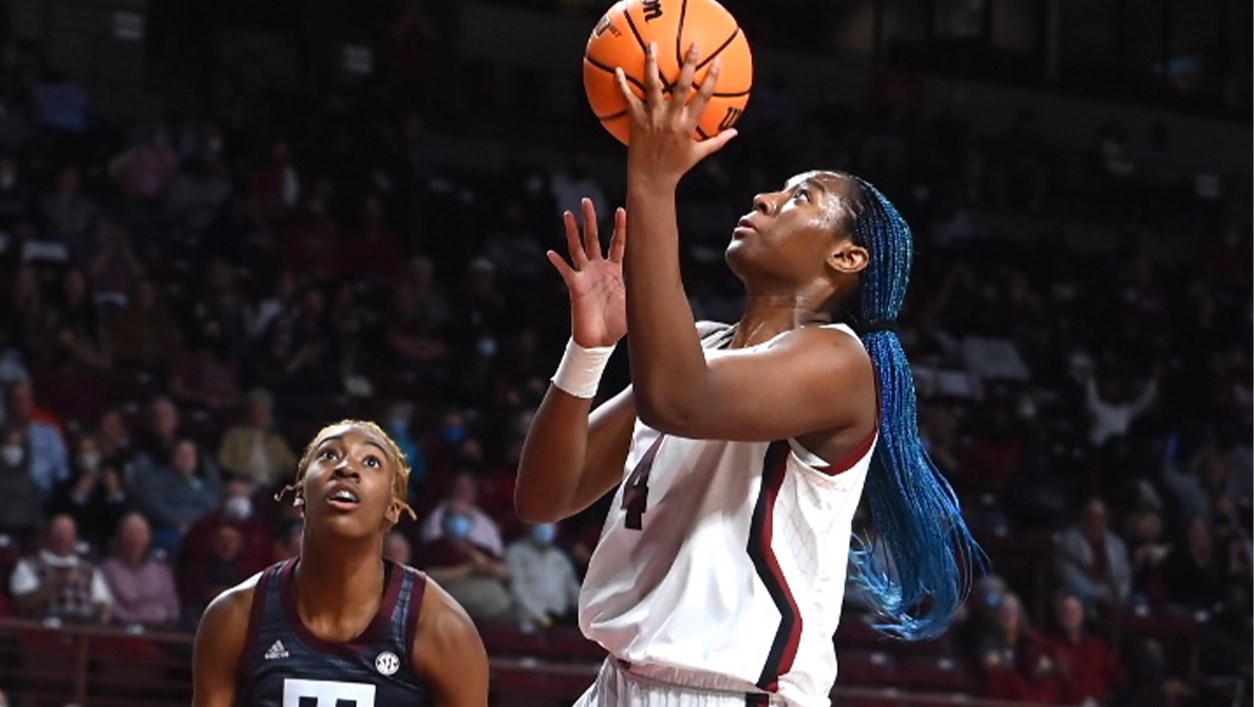 Boston leads No. 1 South Carolina to 65-45 win over Aggies

COLUMBIA, S.C. (AP) – Aliyah Boston had 19 points and 15 rebounds for her 10th consecutive double-double and No. 1 South Carolina used a third-quarter surge to put away Texas A&M 65-45 on Thursday night.

Boston had already tied the program best with nine consecutive double-doubles last time out and moved on top when she grabbed her 10th rebound 17 minutes into the game. She already had 15 points.

Still, the Gamecocks (16-1, 4-1 Southeastern Conference) needed a 15-2 run after halftime to take control. The Aggies (10-6, 0-4) tied it at 26-all on Kayla Wells’ opening basket of the period. That’s when South Carolina turned things up. Destanni Henderson had a pair of 3-pointers while Boston added another inside bucket.

When Zia Cooke hit a 3-pointer, South Carolina led 41-28 and would not be caught as the Aggies opened conference play with four straight defeats – something it had never done since joining the league before the 2012-13 season.

Boston went for eight points the first eight minutes as the Gamecocks moved out to a 16-4 lead. But Texas A&M cranked up the defense and connected on shots, outscoring South Carolina 20-10 to the half and pulled within 26-24.

Like most other opponents this season, the Aggies couldn’t slow down Boston, who notched her 10th straight game with double figure points and rebounds with more than three minutes left in the second quarter.

While Boston was on fire, Cooke was ice cold. The South Carolina junior, averaging 12.6 points a game, missed all nine shots she took in the opening half, five of those from beyond the arc.

Cooke finished 3 of 16 overall – all her baskets on threes – for 10 points. Henderson had 15 points and Victaria Saxton 10.

Qudashiah Hoppie led the Aggies with 15 points on 5-of-19 shooting.

It was Blair’s final time at the Colonial Life Arena, a building he’s praised for its its huge crowds and atmosphere. He walked the concourse an hour before tipoff, hugging supporters and interacting with fans.

Blair’s national championship compatriot, Dawn Staley, presented him with a gift box right before the start as several fans stood and cheered for the Aggies’ coach, retiring after this season. Blair mimicked a golf swing so golf balls were probably involved.

UP NEXT
South Carolina ends the week with a road game at Arkansas on Sunday. With a 3:30 p.m. tip time on ESPN2, the Gamecocks look for their seventh win in a row in Fayetteville, a streak dating back to 2012. The Razorbacks are 11-5 overall and 1-2 in SEC play, most recently defeating Missouri at home last Sunday.