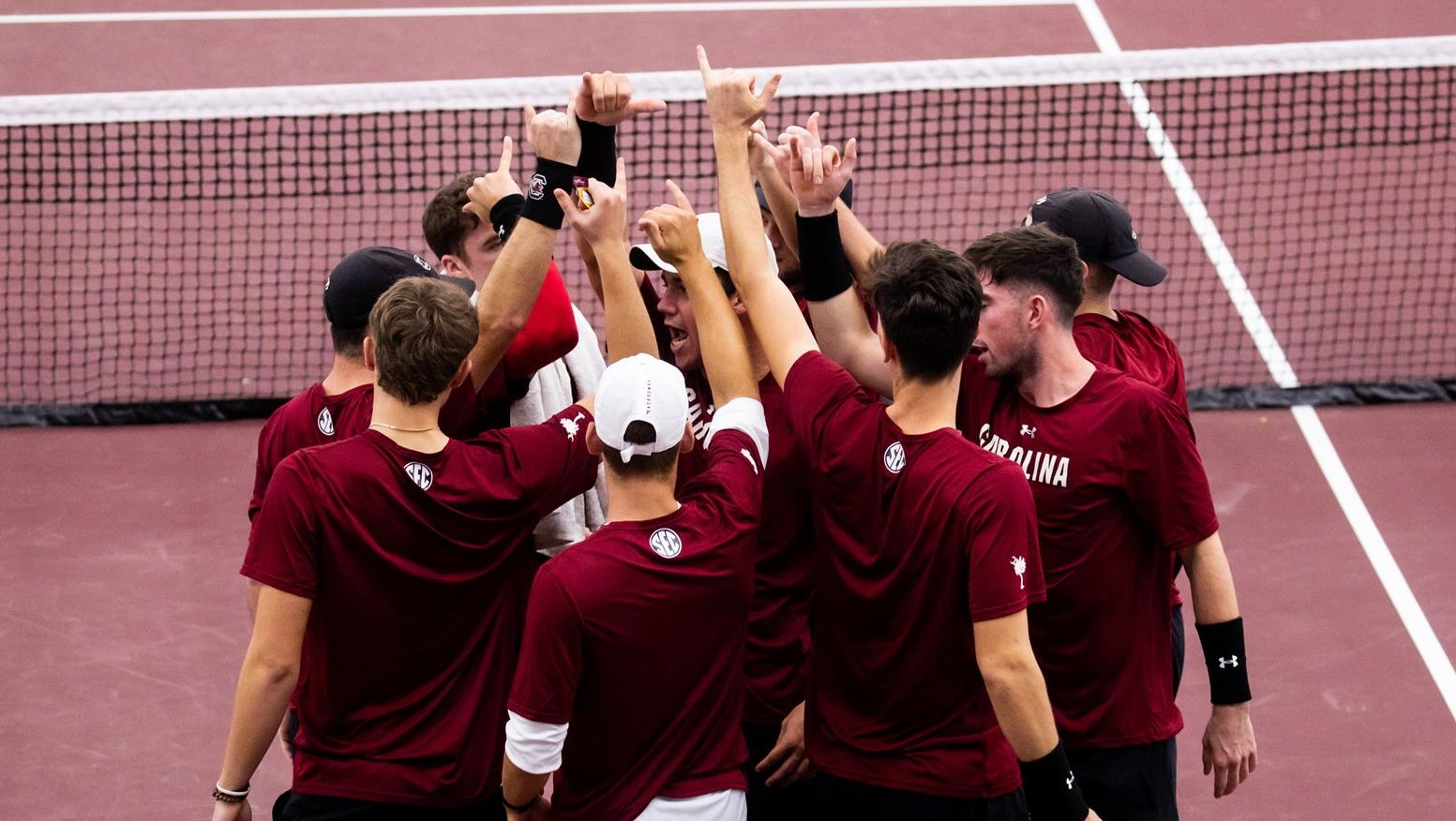 Columbia, S.C. – The South Carolina men’s tennis team earned two wins at home to open its Spring season Friday at Carolina Indoor Tennis Center. They defeated Presbyian College in both matches of the Friday doubleheader. The Gamecocks opened the season with a 6-1 win and ended their day with a 7-0 win over the Blue Hose.

Eight Gamecocks saw action on the day, with every one picking up at least one win.

Head Coach Josh Goffi on the Team’s Performance
“It was a great first rep. I love the fact that Presbyterian fought hard, and they played well today. They were able to make the match happen, even on an inclement weather day like today. Many thanks to them; they are a class act and their players are awesome.

“Our guys played good tennis today. I really enjoyed the fact that they stuck to each point of the match, and that was the goal. In the beginning of the year right now, we’re just trying to play tough and build that endurance – the mental endurance and the physical endurance of what it takes to play teams that are going to push us deep in every single point. That was the goal today, and, for the most part we did a really good job. There were some hiccups and some walkabouts that happened throughout the day, but there were great recoveries, so we’re going to take the positives out of the fact that we were able to button up and recover. That’s also a major tool that we need to develop, so a lot of really good things happened today.”


Match No. 1
The Gamecocks started the season off with a bang, winning all three of their doubles matches. James Story and Raphael Lambling picked up the team’s first win of the season over Presbyterian’s Georgije Babic and Javier Matos. The Gamecock pair struck first and held the lead throught the match, winning 6-1.

Pairs Daniel Rodrigues and Connor Thomson as well as Jake Beasley and Toby Samuel both had more tightly contested matches with back-and-forth scoring. Both courts had scores of 5-4 before closing out their respective 6-4 victories.

In singles, Thomson was the first to clear his court, defeating Nicholas McKinney 6-2, 6-0. Thomson and the other top five Gamecocks in the lineup all defeated their opponents in straight sets to deliver the team victory.


Match No. 2
The Gamecocks once again came out swinging in their doubles matches. At the top of the lineup, Rodrigues and Thomson started the team off with a 6-3 win. The duo struck first but later trailed 1-3. Rodrigues and Thomson fought from behind, winning the next five games to claim the match.

South Carolina’s No. 2 pair of Beasley and Samuel also had to fight from behind. They started the match trailing 0-3 before climbing their way back to a 6-4 victory.

The No. 3 pair of Story and Lambling were more efficient in their 6-2 win over Presbyterian’s Teo Cariov and Pedro Cardoso.

In singles, the Gamecocks swept the board, winning every match in straight sets. Sophomore Carter Morgan cleared his court first and didn’t allow his opponent a single game, defeating Daniel Martens quickly with a final score of 6-0, 6-0.

Beasley was next to clear his court. He earned his victory over Cardoso by yielding just one game in each set.

The four other singles matches went to the Gamecocks in straight set, giving the team a clean 7-0 sweep and a 2-0 start to the season.

The Gamecocks will play next on Sun., Jan. 23, at the Carolina Indoor Tennis Center. They will face off against Charlotte at 10 a.m. before their match against College of Charleston at 1 p.m. Admission is free and open to the public.