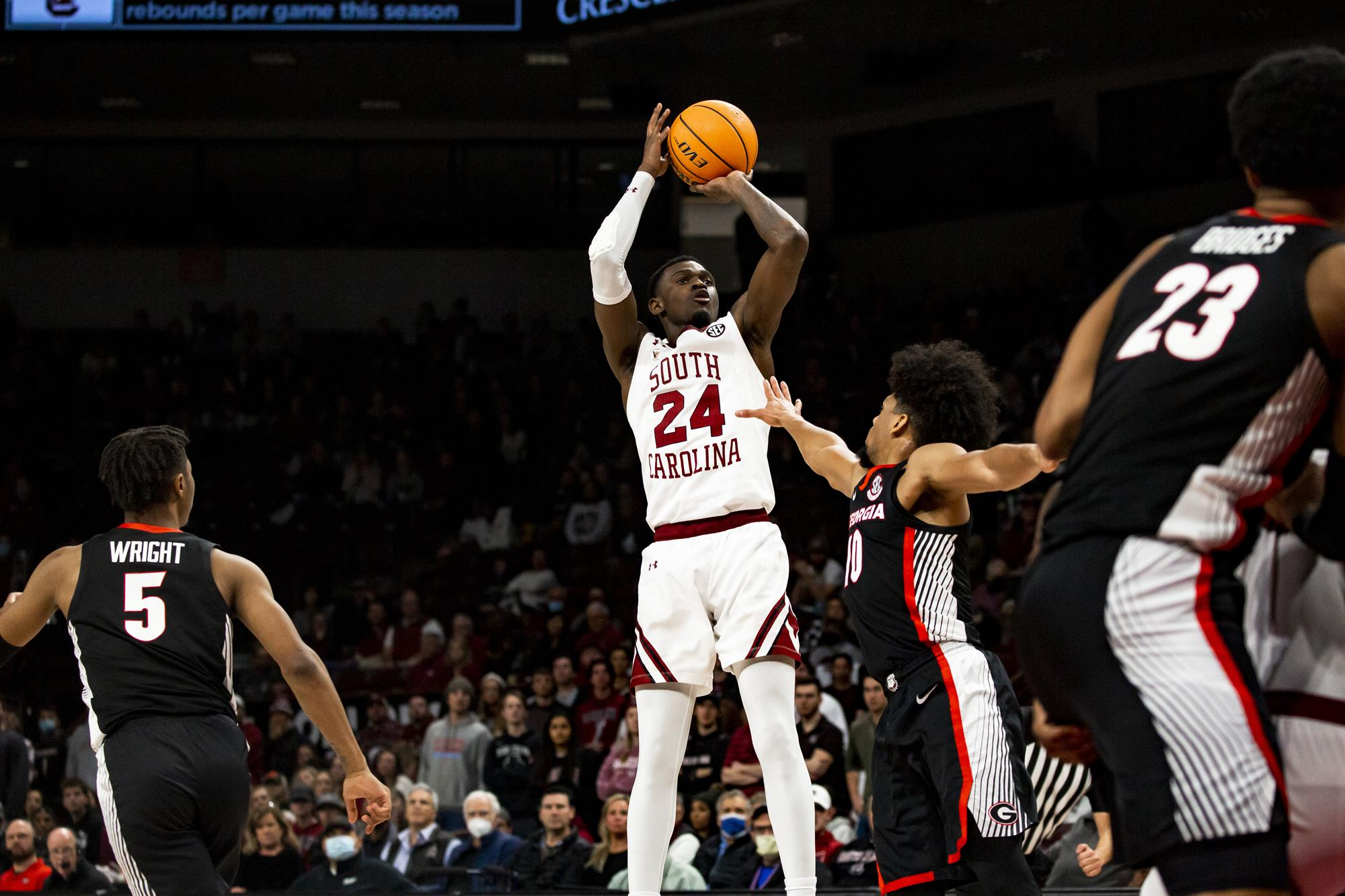 The Gamecocks went on a 24-0 second-half run in the win.

On a three-game losing streak coming into the contest, the senior forward promised that the team was ”gonna figure this out.” The solution came together midway through the second half.

Christian Wright hit two free throws with 10:39 left to put Georgia up, 60-53, but Bryant answered with a free throw and a three-point play to kickstart a 24-0 run. He added a second three-point play, a 3-pointer and a jumper to score half the run himself, putting the Gamecocks well in front, 77-60.

Jermaine Couisnard, who has missed time with an ankle injury and ineffective at times since his return, found his rhythm, scoring 10 of his 15 points in the second half and giving the Gamecocks their first lead since early in the first half with back-to-back transition layups to go up 61-60. He added a 3-pointer off a feed from Bryant for a 67-60 advantage.

Georgia (5-14, 0-6) built a six-point lead in the first half, 42-36, but managed just 24 points after intermission and suffered its eighth straight loss and 11th straight loss in its series with the Gamecocks.

Braelen Bridges paced Georgia with 20 points, hitting 8 of 11 from the floor. Noah Baumann hit 3 of 12 shots from behind the arc and finished with 14 points and Christian Wright hit 10 of 12 from the free throw line off the Bulldogs’ bench to add 10 points.

KEY STATS
> South Carolina went on a 24-0 second-half run, taking a 77-60 lead with 3:50 remaining after trailing by as much as 11 points with 14:04 left.
> South Carolina was 15-for-29 (51.7 percent) from the floor in the second half as the Gamecocks outscored Georgia 47-24 in the final 20 minutes.
> Carolina was 21-for-26 from the free-throw line (80.8 percent) in the game with Keyshawn Bryant and Erik Stevenson making five free throws apiece.
> The 21 free throws made was a season high for the Gamecocks. Carolina had 15 made free throws on three occasions this season.
> Georgia was 21-for-22 from the free-throw line in the first half but the Bulldogs only made four freebies in the second 20 minutes.
> Carolina had 30 points in the paint and 29 fast-break points.
> The Gamecocks committed just 11 turnovers while dishing out 17 assists, forcing nine steals and blocking seven shots.
> Carolina also won the battle of the boards, outrebounding Georgia 37-31 in the win.

NOTABLES
> South Carolina has won 11 straight games vs. Georgia dating back to Jan. 4, 2017.
> Carolina improved to 8-2 inside the confines of Colonial Life Arena.
> The Gamecocks have now held 10 opponents below 40 percent shooting this season.
> Erik Stevenson had his third game of the season with 20 or more points, leading Carolina with 20 points on 6-of-11 shooting with three three-pointers.
> Keyshawn Bryant scored a season high 19 points in the win, going 6-of-10 from the field, 2-of-4 from three-point range and 5-of-6 from the free-throw line.
> Jermaine Cousinard led Carolina with three steals and was Carolina’s third double figure scorer (15 points), going 5-of-10 from the field and hitting a pair of three pointers.
> Ta’Quan Woodley had three blocked shots in 21 minutes of action in the Georgia win, while adding five rebounds and three points.
> Wildens LeVeque had a game-high seven rebounds in 15 minutes, three from the offensive glass.

UP NEXT
> South Carolina remains at home and will faceoff with Vanderbilt (10-7, 2-3 SEC) for the second time this season on Wednesday night. Tipoff is set for 7 p.m. (ET) with Paul Sunderland (pxp) and Pat Bradley (analyst) on the call remotely for the SEC Network.