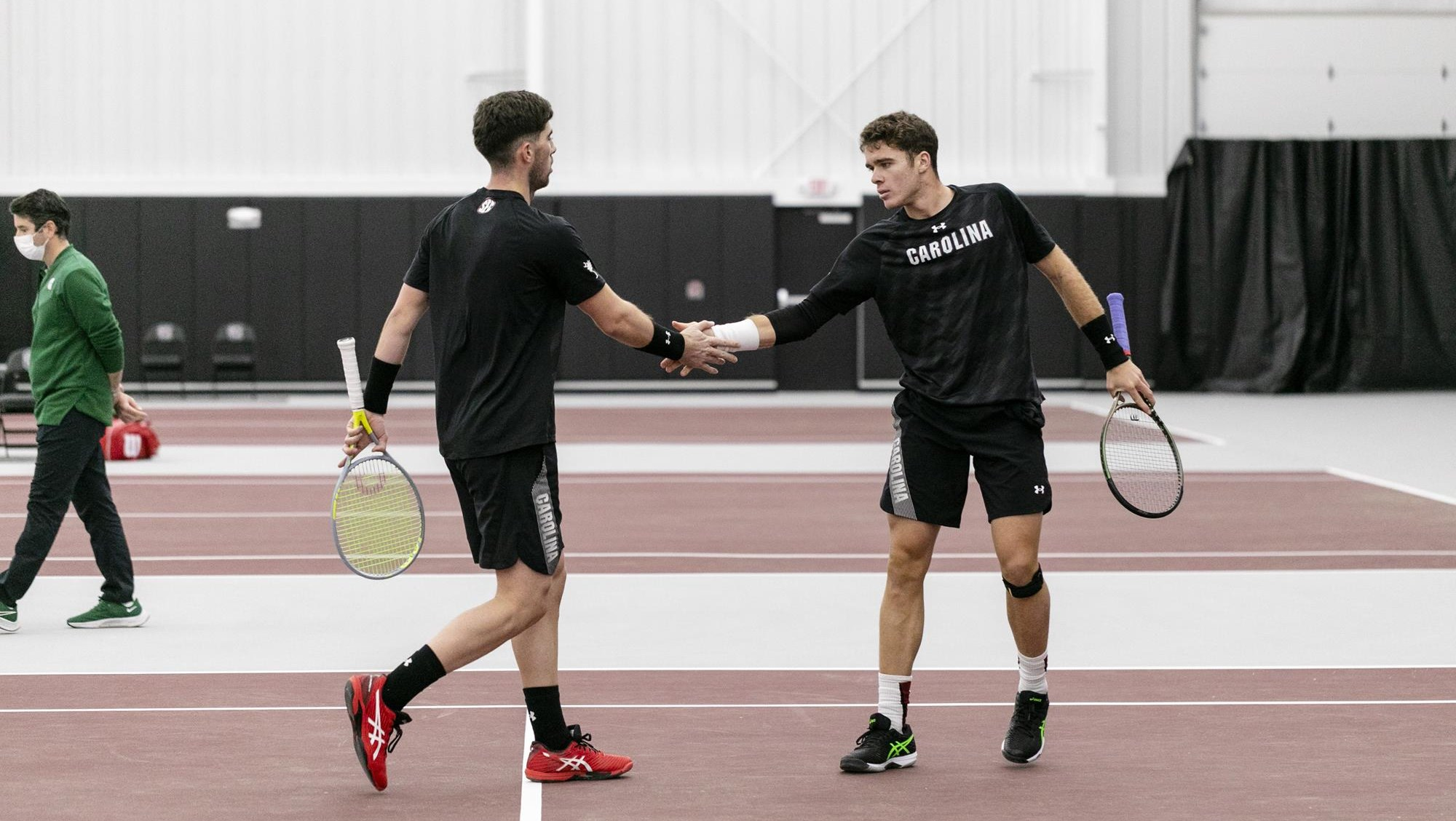 All nine Gamecocks on the roster saw action on the day, with every one picking up at least one win. Newcomer Casey Hoole recorded his first wins in the Garnet and Black, picking up wins in both singles and doubles. Doubles team Daniel Rodrigues and Connor Thomson upset No. 9 Coy Simon and Stefanos Savva of Charlotte to highlight the day’s action.

Head Coach Josh Goffi on the Team’s Performance
“I was really happy with the way that the boys competed today. Charlotte did a great job staying in sets and pushing us to the end. I think we won seven tiebreakers, which showed our resilience and grit in the big moments. That’s going to pay off for us this coming weekend.”

Versus Charlotte
The Gamecocks started the match with confidence in doubles after having not lost a doubles match on their opening day. Jake Beasley and Toby Samuel made quick work of their opponents, beating them 6-2. The other two doubles matches were a little tighter.

In their upset of the 49ers’ top tandem, Rodrigues and Thomson won the first game before locking into a tight back-and-forth match with the lead never extending more than two. The 49ers pushed the match into a tiebreak but the Gamecocks rallied back for a 7-6(3) win over their ranked opponents to clinch the doubles point.

James Story and Raphael Lambling played a similar match, making the first move before an evenly matched battle that pushed to a tie break. The Gamecocks fought hard through the tiebreak, winning the match 7-6(4).

In singles, all of the Gamecocks won their matches in straight sets. Samuel won his match after a long tiebreak in the second set. He won his first set 6-3 before a late move in an extended tiebreak delivered the victory 7-6(7).


Versus College of Charleston
The Gamecocks made quick work of the Cougars with a new doubles lineup. Story and Lambling blanked their opponents 6-0 from the No. 2 position before Thomas and Hoole won their match 6-1 to secure the doubles point from the No. 3. position.

In singles, five out of the six Gamecocks earned their victories in straight sets with no tiebreaks.

Hoole found his spot in the lineup for the first time, competing from the No. 4 position. He endured a two-hour battle to earn his first singles win as a Gamecock. The newly arrived Australian dropped the first set in a tiebreak 6-7 (4), but he opened the second set with three unanswered games and went on to win 6-2 to force a third set. In the third, Hoole picked up another 6-2 set for the win.

The Gamecocks is back in action on Sat., Jan 29, at the Carolina Tennis Center for ITA Kickoff Weekend. The day opens with Duke and Liberty facing off at 11 a.m. before South Carolina takes on LSU at 2 p.m. Admission is free and open to the public.