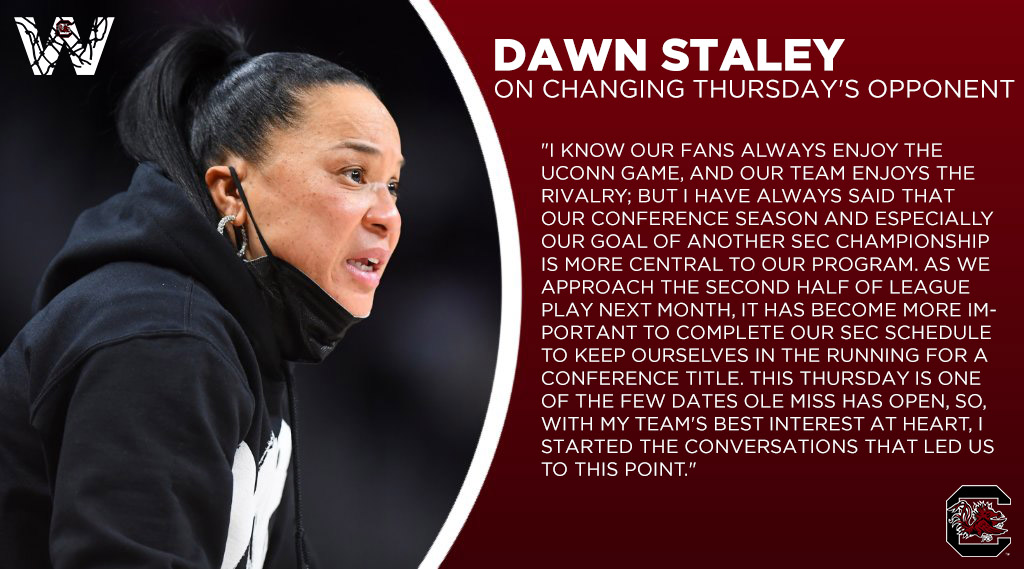 COLUMBIA, S.C. – On Thu., Jan. 27, South Carolina women’s basketball will now host SEC foe Ole Miss instead of non-conference rival UConn at Colonial Life Arena. Tipoff time and broadcast information will be announced soon. All tickets for the original Jan. 27 game will be honored for the game against Ole Miss.

“I know our fans always enjoy the UConn game, and our team enjoys the rivalry; but I have always said that our conference season and especially our goal of another SEC championship is more central to our program,” South Carolina head coach Dawn Staley said. “As we approach the second half of league play next month, it has become more important to complete our SEC schedule to keep ourselves in the running for a conference title. This Thursday is one of the few dates Ole Miss has open, so, with my team’s best interest at heart, I started the conversations that led us to this point.”

The Gamecocks and Rebels were originally scheduled to play on Jan. 2 but had to postpone due to a combination of positive COVID-19 tests, contact tracing and subsequent quarantining of individuals within the Ole Miss program. UConn, which has also suffered several BIG EAST game postponements, agreed with the schedule change.

“Dawn reached out to me about postponing the series for this season,” UConn head coach Geno Auriemma said. “It’s a priority for South Carolina to make up SEC games, so this is the best decision for them right now. We know a lot of fans were excited for this game, but we look forward to continuing the series with South Carolina in future seasons.”

Thursday’s game was the last in the previous home-and-home agreement with UConn, and a new agreement for the next two seasons was signed this summer. Staley and UConn head coach Geno Auriemma will continue conversations through the offseason to determine any changes to the home/away rotation of those games. The Gamecocks and Huskies have played every regular season since the 2014-15 season, and that streak continues despite this week’s cancellation as the two met on Nov. 22 in the Bahamas. South Carolina won that outing 73-57.