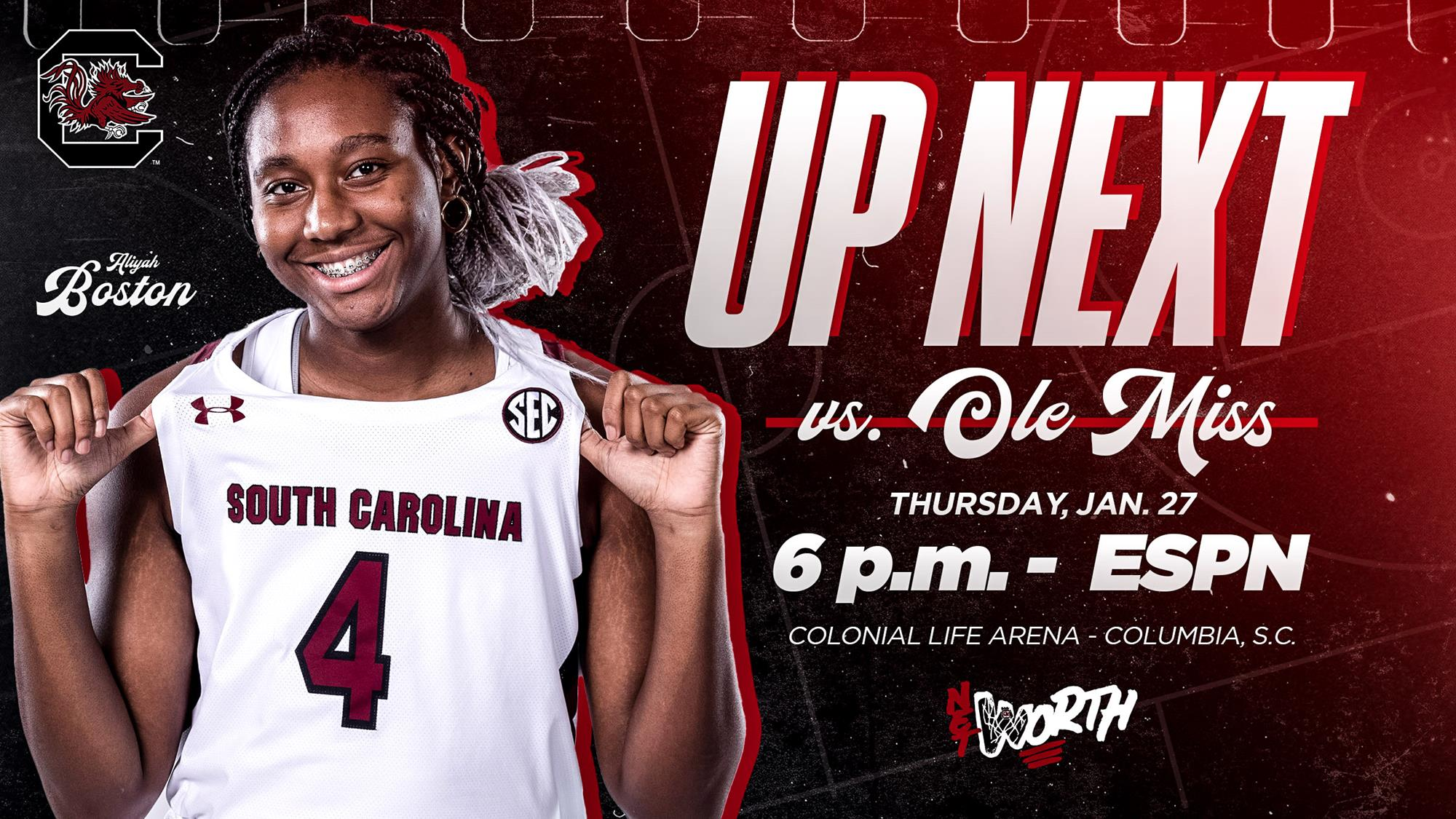 Both South Carolina and Ole Miss have one loss in league play.

47.2 – South Carolina has rebounded an SEC-best 47.2 percent of its own missed shots in league play this season.

The Ole Miss Series
South Carolina leads the all-time series 25-17 after a 15-2 mark in the Dawn Staley era (beginning 2008-09). That record includes wins in the last 13 meetings, dating back to an overtime win in the first of two games in 2010-11 season. The Gamecocks are 14-5 against the Rebels in Columbia.

In last season’s trip to Colonial Life Arena (Feb. 25), Ole Miss got off to a hot-shooting start before the Gamecock defense locked down in the second and third quarters, allowing just 15 points in the two periods combined, to cruise to a 68-43 victory.

Five-Second Count
South Carolina women’s basketball is in the midst of its most successful era, claiming at least 20 wins for the last 10 seasons, including four 30-win seasons in the last seven campaigns. The Gamecocks have played in the NCAA Final Four three times in the last six NCAA Tournaments, including winning the 2017 National Championship, and have been ranked in the AP Top 25 for 180 consecutive weeks, including 49 in the top 10. Staley has led the Gamecocks to their only No. 1 rankings in program history, owning that spot 37 times (12 weeks in 2014-15, 10 weeks in 2019-20, 3 weeks in 2020-21, 12 weeks in 2021-22), which ranks sixth all-time for a program in that poll. In the SEC, the Gamecocks have won five SEC regular-season titles and six SEC Tournament championships.

Under Staley’s leadership, seven Gamecocks have earned All-America status, two have earned SEC Player of the Year honors and 16 have picked up All-SEC recognition at least once. Eight Gamecocks have been selected in the WNBA Draft in the last six years, including 2018 No. 1 overall pick A’ja Wilson, who went on to become the Gamecocks’ second-straight WNBA Rookie of the Year (2018) and the program’s first WNBA MVP (2020).

Ranked Readings
Against ranked opponents, South Carolina is 93-66 in the Dawn Staley era (beginning 2008-09), and even that mark is skewed by the early seasons of her tenure.

This season, South Carolina’s eight wins over ranked opponents are three more than any other team in the country and have come by an average of 11.0 points.

Junior Aliyah Boston leads the team against ranked opponents, averaging a double-double (17.0 pts/12.9 rebs) to go with 4.0 blocks per game. Zia Cooke has 15.1 points per game, and Destanni Henderson is also in double figures at 13.2.

Glass Ceiling
Since the start of the 2019-20 season, the Gamecocks have dominated on the glass, ranking among the NCAA’s top five in rebounds per game and rebounding margin every season and sixth in offensive rebounds per game each of the last two full seasons. South Carolina has been out-rebounded just once (Stanford, 12/21/21) in its last 52 games, dating back to the 2019-20 regular-season finale against Texas A&M.

This season, South Carolina leads the nation with a +17.9 rebounding margin. The Gamecocks lead the SEC in offensive (.460) and defensive (.754) rebounding percentage .

Individually, Aliyah Boston leads the way with 11.5 rebounds per game, which ranks second in the SEC and 12th in the nation. Three other Gamecocks pull in more than five boards per game – forward Victaria Saxton (5.4) center Kamilla Cardoso (5.3) and guard Brea Beal (5.1).

At South Carolina, Staley has coached 18 McDonald’s All-Americans, including 14 who joined the Gamecocks as freshmen. That total number will go up by two next season as the Gamecocks’ two Class of 2022 signees, Talaysia Cooper and Ashlyn Watkins, earned the title on Jan. 25.