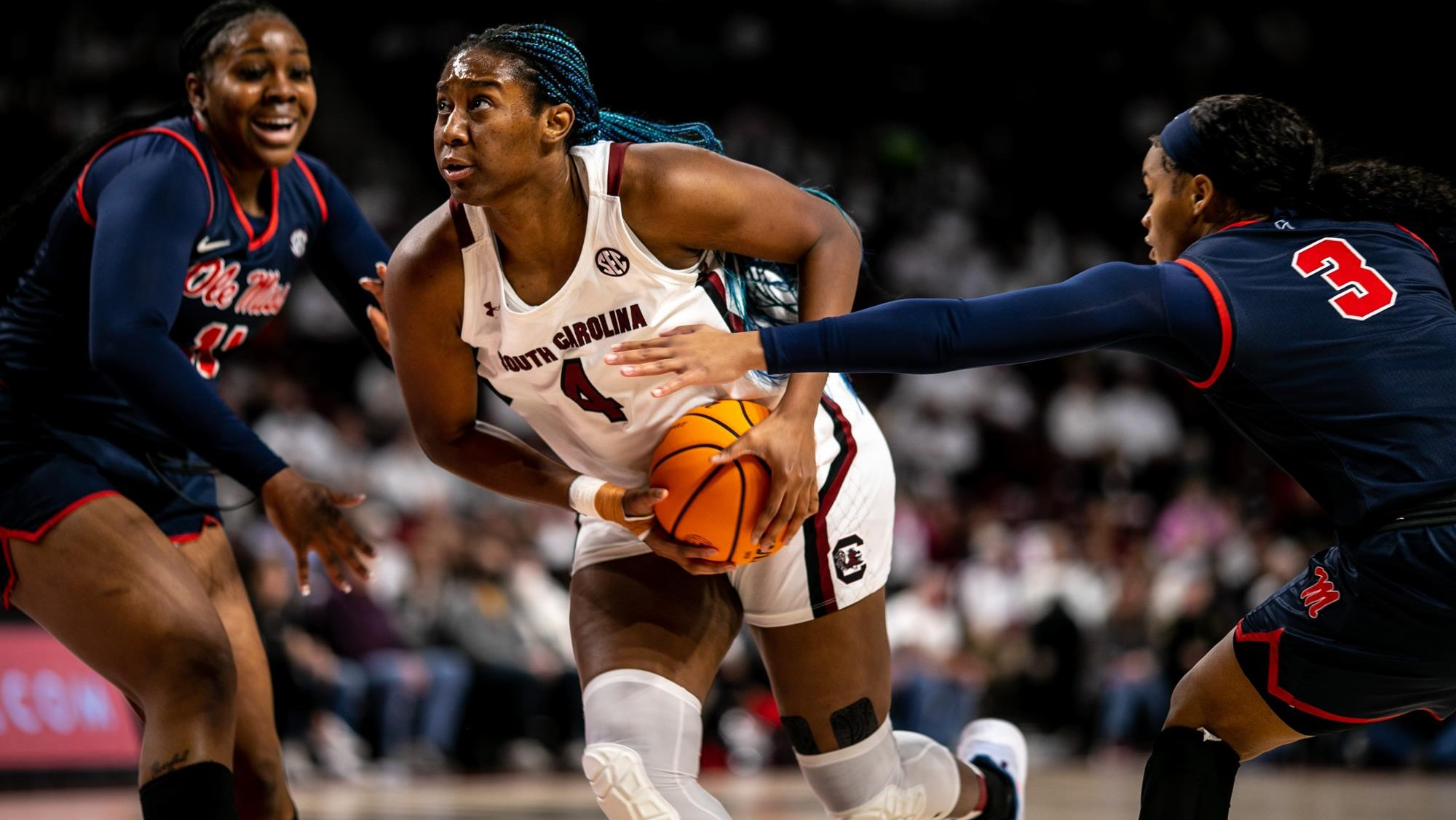 Boston leads No. 1 South Carolina to 69-40 win over Ole Miss

COLUMBIA, S.C. (AP) – Aliyah Boston is not sure she’s doing anything special, other than helping No. 1 South Carolina win. She might be the only one who sees it that way.

”I think the crowd is double-double watching,” Gamecocks coach Dawn Staley said with a laugh.

Boston finished with 22 points and 12 rebounds for her 13th straight double-double, and No. 1 South Carolina defeated No. 24 Mississippi 69-40 on Thursday night.

The Gamecocks (19-1, 7-1 Southeastern Conference) were scheduled for their yearly contest with No. 10 UConn. But with South Carolina a game behind SEC leader Tennessee, Staley called off the non-conference game to face the Rebels (17-3, 5-2) in a contest postponed due to COVID-19 earlier this month.

Staley got just what she needed from her team, especially her 6-foot-5 All-American. Boston reached 20 points for the first time in 11 games and came out on top in the showdown with Rebels star Shakira Austin.

The double-double streak is the already the longest in South Carolina history, with even WNBA MVP A’ja Wilson, attending the game, in awe of Boston’s play.

”She’s just killing it in her own fashion,” Wilson said.

”I kind of push it aside,” Boston said of the streak. ”If it happens, it happens. If I focus on one thing it won’t happen, so I just focus on winning.”

Boston had 15 points and four boards by the half. She was sitting on nine rebounds entering the final quarter when she grabbed Lashonda Monk’s missed layup for No. 10 to continue a streak that began Nov. 29 in a win over North Carolina A&T.

Boston was in the thick of things, as usual, with a couple of early baskets including a strong drive from the left side as the Gamecocks went up 12-4. They pushed the edge to 33-17 three minutes before the half as Boston set up down low, caught a slick feed from Victaria Saxton and powered through a double-team for a basket and a three-point play.

In the Austin-Boston showdown, it was Boston in a runaway. Austin, also 6-5, struggled to find space to shoot much of the game as the Rebels lost their 14th straight to South Carolina.

The Ole Miss senior led her team with 15 points on 5-of-18 shooting.

”It was embarrassing to say the least,” Ole Miss coach Yolett McPhee-McCain said.

UP NEXT
The team wraps up a three-game week when it travels to Gainesville for a noon tip at Florida on Sunday, Jan. 30. The Gators are 15-5 overall and are coming off an upset of No. 12 LSU at home on Sunday, Jan. 23. That marked the team’s fifth win in a row, with three of those victories coming against nationally ranked opponents.