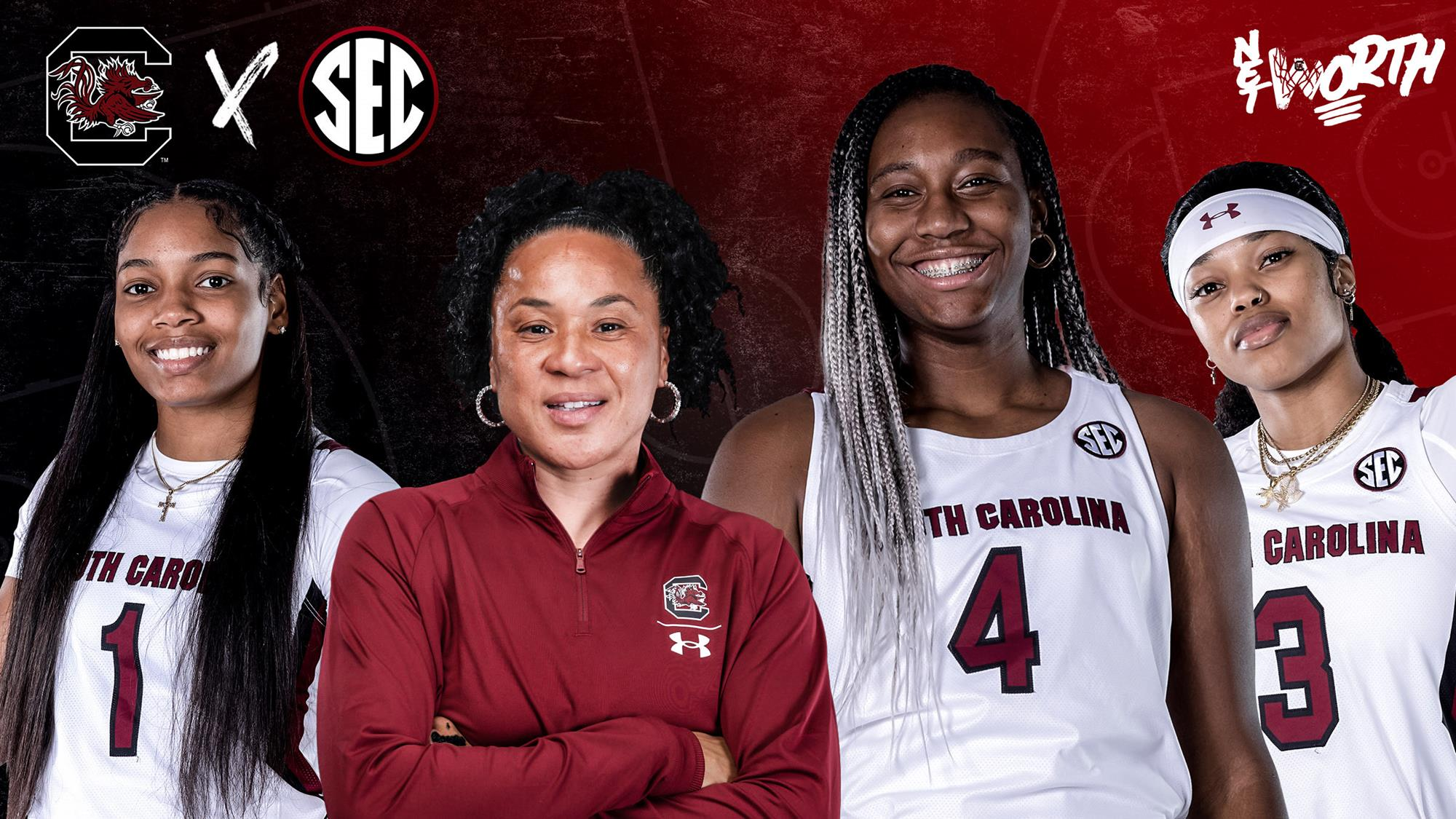 Share
COLUMBIA, S.C. – South Carolina women’s basketball head coach Dawn Staley and a trio of Gamecocks featured prominently in the annual SEC awards, the conference office announced today. In addition to Staley as the league’s Coach of the Year, junior forward Aliyah Boston grabbed Player of the Year honors and continued her career sweep of the league’s Defensive Player of the Year award, claiming the honor for the third time in as many seasons. Senior Destanni Henderson joined Boston on the All-SEC First Team, and Zia Cooke made the Second Team by a vote of the league’s head coaches.

To capture SEC Coach of the Year honors for the fifth time in her career, Staley led her team to its sixth SEC Regular-Season Championship overall and its second in the last three seasons. The Gamecocks’ 27-1 overall record comes behind blending a veteran team with the program’s second No. 1 signing class in the last three seasons. Their 11 wins over ranked opponents leads the nation, and the Gamecocks are just the second SEC team in league history to win its first 11 games against ranked team. South Carolina has been ranked No. 1 in both national polls every week of the season.

The third Gamecock to earn SEC Player of the Year honors, Boston has established herself as a dominant force on both ends of the floor and is on the watch list for both National Player of the Year and National Defensive Player of the Year honors again this season. She is just the fifth player in program history to record 1,000 rebounds, hitting that mark in the regular-season finale at Ole Miss on Sunday. She hit the 1,000-point plateau earlier this season against Maryland (Dec. 12). Boston’s 16.8 scoring and 11.9 rebounding averages both increase in her 11 games against ranked opponents to 17.5 points and 12.6 rebounds per game. In addition to ranking 10th in the nation in blocks per game (2.7) and seventh in defensive rebounds per game (8.2), she is second in double-doubles (22), sixth in rebounds per game (11.9), 27th in offensive rebounds per game (3.8) and 29th in field goal percentage (.544). According to Her Hoop Stats, her player efficiency rating of 35.3 leads the nation as does her 12.6 win shares.

Henderson picked up All-SEC honors for the first time since earning a spot on the 2019 All-Freshman Team. The Gamecocks’ most accurate 3-point shooter at 40.0 percent (36-of-90), she is second on the team in scoring at 11.7 points per game to go with her 4.3 assists per game, which ranks seventh in the SEC. She has scored in double figures 15 times in her 25 games, including eight of the 16 SEC games. With five or more assists 12 times, Henderson needs just three assists to move into the program’s all-time top 10 in career assists despite just two seasons as the starting point guard. One of the Gamecocks’ top performers in the clutch, she is second on the team with 3.8 points per fourth quarter against ranked opponents, shooting 9-of-11 free throws and 50.0 percent from the field in those situations.

Cooke averages 11.5 points on the season and is tied for second in assists. In 11 games against ranked opponents, her scoring average rises to 13. 4 points as does her field goal percentage to .388. Her 19 double-figure scoring games includes 13 SEC outings, and two off her three 20-point games came against top-10 opponents.

No. 1/1 South Carolina opens play in the 2022 SEC Tournament in Nashville this weekend, facing either eighth-seeded Arkansas or ninth-seeded Missouri in Friday’s quarterfinal game, which tips off at 1 p.m. ET on SEC Network.