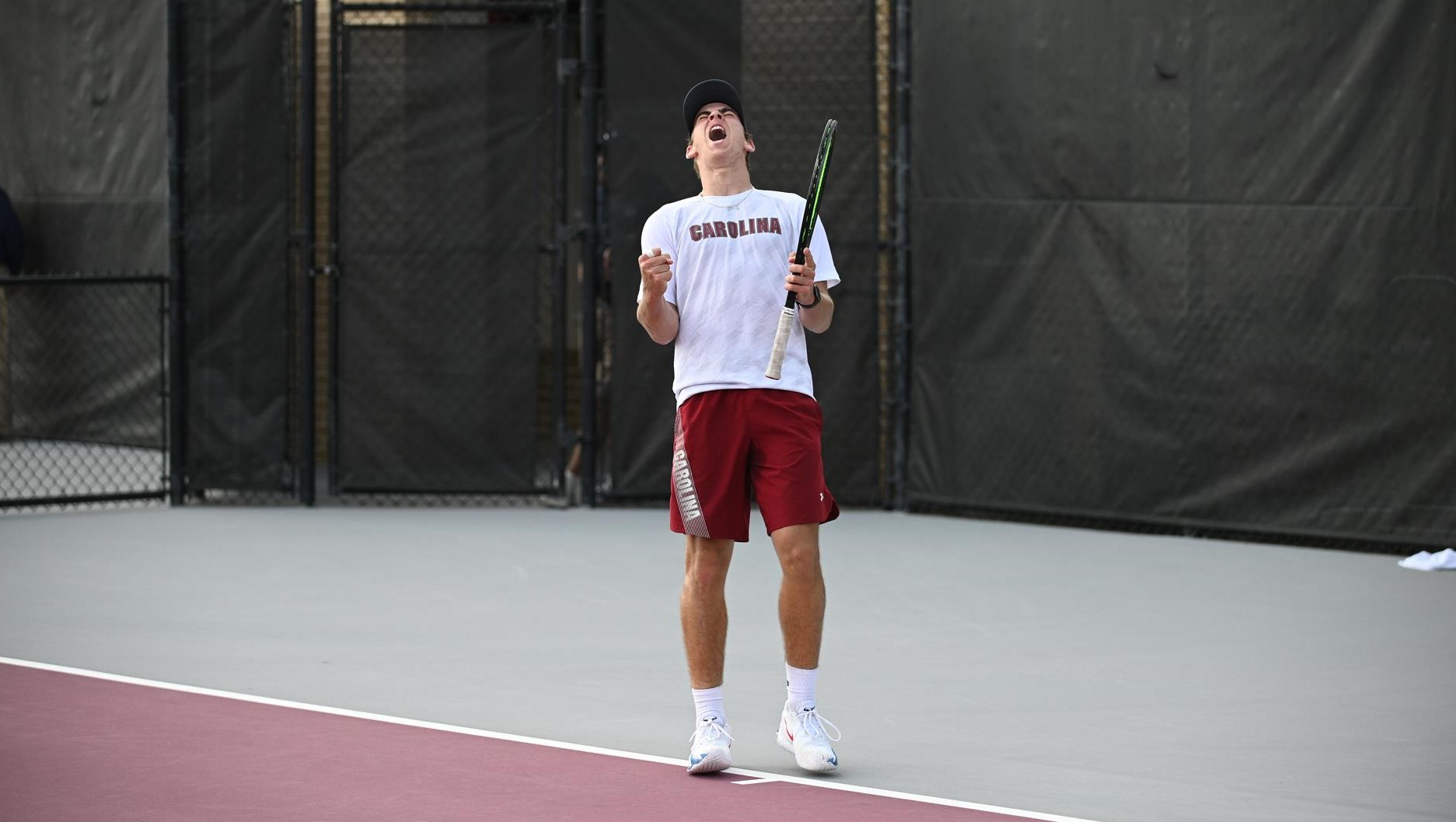 Columbia, S.C. – No. 6 South Carolina Men’s Tennis came back from an 0-3 deficit to defeat No. 42 LSU 4-3 on Sunday. The Gamecocks dropped the doubles point and lost two singles matches before rallying for four straight singles wins to secure the victory.

“After our last match we had a meeting to set some goals for today,” said head coach Josh Goffi. “For the most part we absolutely responded against a very hungry and opportunistic LSU team. Credit goes to the guys who stepped up. Danny (Rodrigues) is our rock, he’s been a rock for years – it’s just what he does. I loved seeing Raph (Lambling) clinch because it was something that he needed. He is one hell of a player and unfortunately has taken some lumps over the last few years but now he’s on the come-up. You’ve got your freshman (Casey Hoole) who stepped in at Court 4 in a tough spot and picked up a really important win. And not to mention Carter Morgan stepping in and beating one of the toughest opponents in the SEC. Carter was just relentless today. Super proud of all of our guys but the young stars stepping up on Court 4 and 6 were amazing.”

The match started with doubles. Rodrigues paired with fellow junior Beau Pelletier in the No. 1 position and took down LSU’s No. 1 pair 6-3 to kick off the day. From there, the momentum shifted to the Tigers. LSU picked up wins in both remaining doubles matches, securing the doubles point.

Play transitioned to singles in which the Tigers quickly got wins on Courts 3 and 5 to put them up 3-0. With four singles matches remaining, there was no room for error for the Gamecocks.

Rodrigues was the first to get a point on the board, taking down No. 35 Ronald Hohmann in straight sets. Rodrigues breezed through the first set, winning 6-2. He went down 0-2 to start the second set before putting up three straight games to take the lead. Hohmann managed to tie the match a five games all but Rodrigues had no interest in allowing a third set. He won two straight games to take the ranked victory with a 7-5 second set.

Morgan added the next point for the Gamecocks. He was dominant through the first set, defeating Boris Kovlov of LSU 6-2. In the second set, Kozlov took the first game before Morgan put up two games to take the lead. The momentum shifted back to Kozlov who answered with three straight games to earn a 4-2 lead. Morgan had to fight from behind but earned another game win to make it 4-3 in favor of the Tiger. Kozlov again answered with a game win to retain his two-game advantage.

The Gamecock sophomore rallied to put up two straight games and tie the set at five all. Kozlov appeared to have the advantage after winning the next game but Morgan again leveled the score at six all to force a tiebreak.

After initially going down 0-1 in the tiebreak, Morgan found momentum, putting his score up 5-2. Kozlov fought back to even the tiebreak at five all and again at six all after Morgan won a point. The Gamecock was finally able to break away and win two straight points to end the second set and secure the win 6-2, 7-6(6).

Hoole, a freshman, evened the match for the Gamecocks with his win over LSU’s Joao Graca on Court 4. Hoole took the first set 6-4 but had a difficult time in the second set, dropping it 3-6. With the match splitting sets, the third set was critical. Hoole dropped the first game but immedealy won a game of his own to even the set early. Graca again won a game but Hoole responded immediately, this time putting up two games to earn a 3-2 lead. Graca evened the set at three all but Hoole wasn’t having it. He put up three straight games to take the final set 6-3 and earn his first SEC victory.

With the match now tied a 3-3, all eyes turned to Court 2 where Lambling was facing LSUs Vlad Lobak. In the first set, Lambling appeared to have the advantage, going up 5-3, but Lobak pulled off an impressive comeback, putting up four straight games to win the first set 7-5. Lambling came out swinging in the second set, earning three games before allowing his opponent one. Lobak again looked to comeback after pulling within one game at 4-3 but he was never able to recover and Lambling took the second set 6-3.

With the match on the line, the Gamecocks needed the third set win. Lambling didn’t shy away from the pressure and dominated the set, winning it 6-0 to give the team the comeback victory.

The Gamecocks will be in action next on the road, facing No. 2 Tennessee in Knoxville on Fri. March 11 before heading to No. 22 Georgia on Sun. March 13.