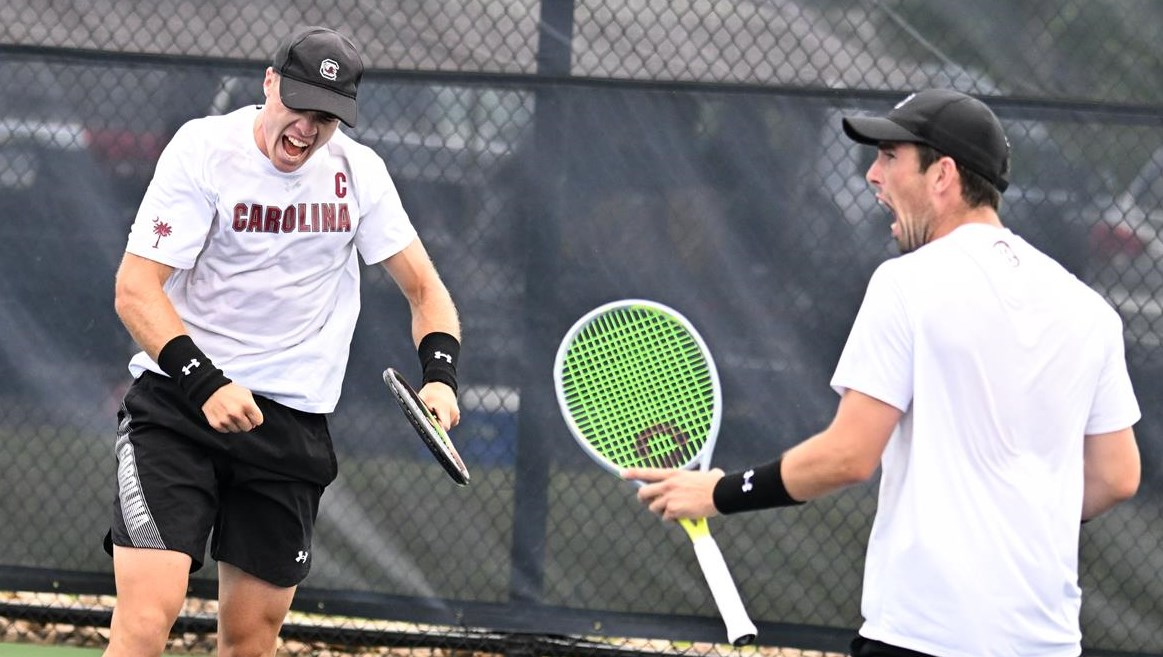 Rodrigues and Thomson are Semifinal Bound

The Gamecock duo took down the No. 3 seed in straight sets to punch their ticket to the semifinal round.

Champaign, Ill. – South Carolina men’s tennis doubles pair Connor Thomson and Daniel Rodrigues continued their historic run in the NCAA Doubles Championships on Thursday with an upset of the No. 3 seed. The Gamecock duo took down Jake Finn Bass and Svewn Lah of Baylor in straight sets to punch their ticket to the semifinal round.

“It was a great win today!” said head coach Josh Goffi. “I couldn’t be happier for these guys. They played aggressive from start to finish and it paid off in big moments.”

During another day of high winds, the South Carolina pair got off to a rocky start, giving up their second service game to give the Bears the lead. The Gamecocks held steady through the next six games to never allow their opponents to increase their lead by more than two. With the Baylor pair up 5-4, the Gamecocks forced a game to deuce and managed to break their counterparts to tie the set at five all. The two teams each took their next service games to send the first set to a tiebreaker.

The second set started out evenly for both sides. Bass and Lah had first serve and each team took their own service games through the first eight. The Gamecocks battled a tough game to deuce at four all and earned a much needed break to take their first lead of the set 5-4. Thomson was able to serve his way through the final game to take the second set 6-4 for the win.

South Carolina’s advancement to the semifinals is the furthest that a doubles pair has ever gone in the NCAA Doubles Championships in program history. The pervious record was the Round of 16 that had been achieved four times before.

Rodrigues and Thomson are set to face No. 2 Matej Vocel and Robert Cash of Ohio State in Friday’s semifinal match. The match time will be released at a later date.