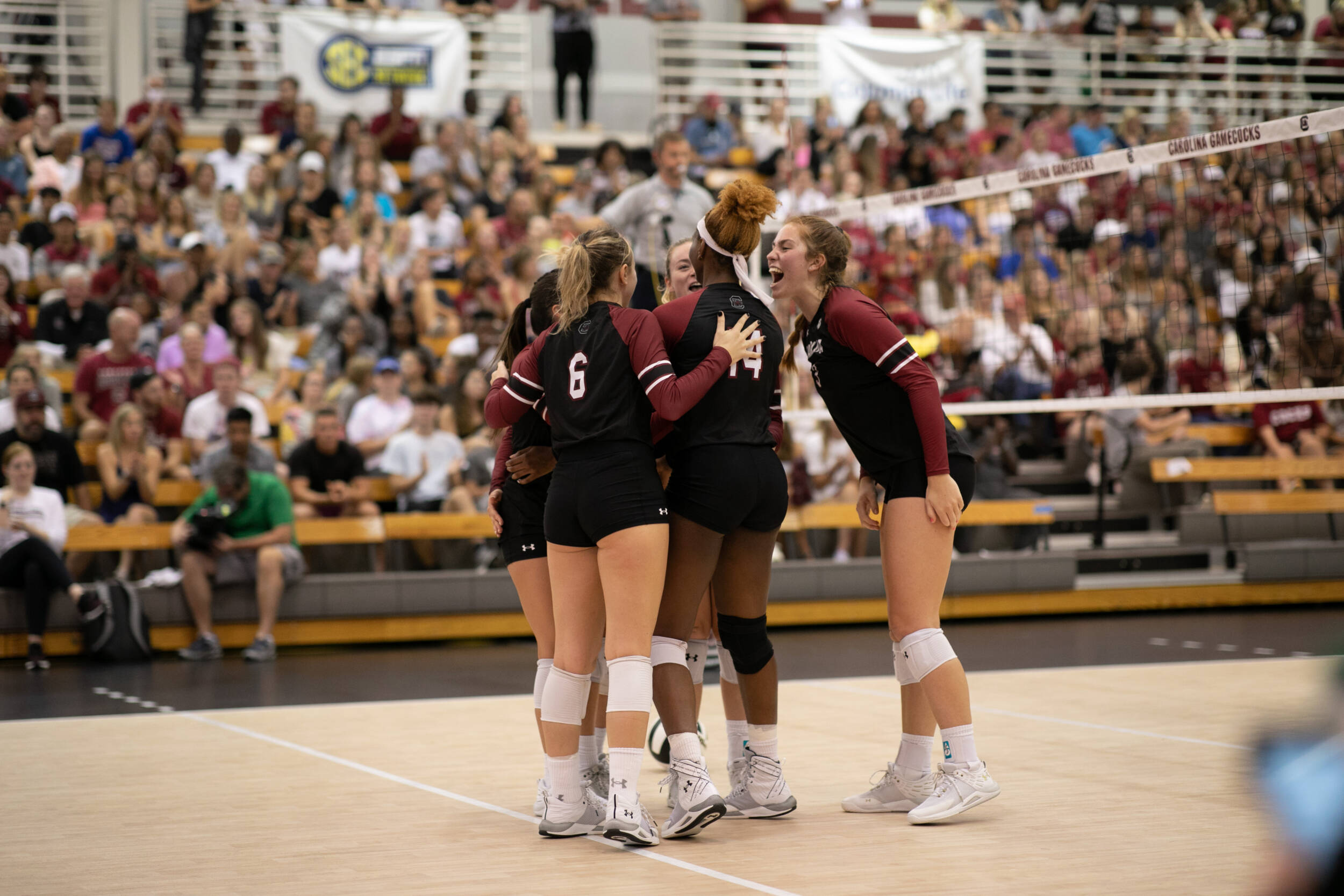 Volleyball Heads to North Carolina for Pair of ACC Matchups

CHAPEL HILL, N.C. – Fresh off three wins in the opening weekend of its season, South Carolina volleyball now embarks on its first road trip with a three-game swing against ACC teams starting on Friday. The Gamecocks play North Carolina in Chapel Hill on Friday at 6:30 p.m. then go west for a 7 p.m. match at Wake Forest on Saturday night.

Both matches will be on the ACC NetworkX, the network’s online-only channel.

IT JUST MEANS “MOOR”
As head coach Tom Mendoza said postgame on Friday, Aug. 26, “Kenz had one of the better days as an attacker that you could possibly ask for.” McKenzie Moorman totaled 42 kills and a .478 hitting percentage over the team’s three wins in week one. Dating back to 2001, the beginning of the rally-scoring era, only five other Gamecocks had 40 or more kills in the first three games of a season, but none of their hitting percentages come close to Moorman’s .478 clip. Nationally, Moorman’s hitting percentage ranked 31st in Division I, but no other individual ahead of her had more kills.

SCOUTING THE TAR HEELS
North Carolina went 1-2 in its opening weekend, traveling out west for games in Colorado. The Heels defeated Santa Barbara but dropped matches to Colorado State and Northern Colorado. It’s a new-look roster brimming with young talent, UNC has seven true freshmen on the roster and the class was unanimously ranked in the top 10 nationally by recruiting outlets. Four freshmen played the majority of the action out in Colorado last weekend, most notably the setting duo of Anita Babic and Ella Bostic. The team is led by the pin combo of Charley Niego and Mabrey Shaffmaster; Niego was a four-time All-ACC honoree at Notre Dame before coming to Chapel Hill, Shaffmaster was the ACC’s Freshman of the Year last fall. The pair accounted for well over half the team’s kill total in week one, each putting away 34 kills in the 10 sets of action.

SCOUTING THE DEACONS
Wake Forest went 2-1 in week one, hosting a two-day home tournament with wins over N.C. Central and Kennesaw State but a five-set loss to Western Carolina. Four different hitters totaled 20 or more kills in the 12 sets played, two of whom are true freshmen – Paige Crawford and Olivia Murphy. Two more freshmen also were factors in the tournament – setter Rian Baker (46 assists vs. Kennesaw) and libero Emma Farrell (4.75 digs per set, seven service aces in 12 sets). The injection of youth supports a core of veteran returners who helped Wake win 15 games in 2021 – the program’s highest win total in over a decade. Seniors Emmy Ogogor and Peyton Suess and junior Olivia Franke already have a solid first week under their belts and junior Ashley Slater – the team’s returning kills leader – did not even play in week one.

GAMECOCK NATION PACKS THE COURT IN WEEK ONE
Gamecock fans came out in full force to start the season, with sellout crowds for the wins over Omaha and Winthrop. After the full first week of games wrapped, South Carolina ranks 14th nationally in average attendance (1,264) and 12th in total attendance (3,793). Dating back to 2014, the Gamecocks volleyball program is averaging at least 1,000 fans per game every season.

PAIR OF TRANSFERS READY TO MAKE INSTANT IMPACT
Along with the quartet of true freshmen, South Carolina’s coaching staff added a veteran presence to the roster for the fall. Joining the Gamecocks are graduate transfers Jenna Hampton (Penn State) and Dalaney Hans (Georgia) who combined for 182 games played at their former schools.

Hampton made the AVCA all-region team and was second team All-Big 10 last fall as the libero for the Nittany Lions, leading the Big 10 with 4.83 digs per set. Her reputation up north followed her to Columbia, as she represented the team on the SEC coaches’ preseason all-conference team released in July.

Hans is staying in the SEC for her new squad, coming from Georgia where she played in 70 matches. She enjoyed her best seasons in the final two campaigns in Athens, combining for 784 assists and 259 digs in 157 sets between her junior and senior seasons.

SOPHOMORE TRIO READY TO BUILD OFF YEAR ONE
South Carolina’s success in 2021 was thanks in large part to the immediate impact of its freshman class, most notably setter Claire Wilson, pin hitter Lauren McCutcheon and defensive specialist Morgan Carter. Wilson and McCutcheon were the only two Gamecocks to play in every set last fall, and Carter worked her way into the main libero role – the first freshman in program history to serve as the full-time libero. Both McCutcheon and Wilson missed some time between last fall and now due to injury, but the trio’s overall growth from freshmen to sophomores will undoubtedly be a major factor in the team’s success again this fall.

VOLLEYBALL GENES
Freshman setter Kimmie Thompson is the third generation of the family to reach the Division I level, following the footsteps of her sisters Kaely and Kyra. Kaely walked on at South Carolina in head coach Tom Mendoza’s first season and played for three seasons total with 20 games played. Middle sister Kyra plays beach volleyball at the College of Charleston.

She isn’t the only member of the team with Gamecocks in the family; senior Gabby Brown is the younger sister of Callie Brown, who played from 2015-18, and Kiune Fletcher is the cousin of the program’s first all-American, Mikayla Shields (2016-19).

BATTLE TESTED IN THE BACK ROW
South Carolina’s identity this season will likely be defense-first in the early part of the fall, thanks to a wealth of experienced passers. Leading the way is Jenna Hampton, who compiled over 1,000 career digs at Penn State and a Big 10-leading 4.83 digs per set in 2021. She joins a group of returner who accounted for 70 percent of Carolina’s digs last fall, including three individuals who had 150 digs or more: Morgan Carter (299 digs), Lauren McCutcheon (226) and Riley Whitesides (164).