Hope Dominique’s interest in a career in medicine derives in part from her own personal health struggles and the desire to pay it forward. The South Carolina junior cross country and track student-athlete knows she can empathize with some of her future patients since she’s been on the other side of the stethoscope.

“I have had a lot of injuries and health struggles that I’ve had to see a lot of doctors for, and a couple of them have been very impactful for me,” said Dominique, who is studying exercise science and is considering medical school or physician assistant school after graduation. “I want to give back by working in the medical field. It doesn’t have to be in sports medicine. Pediatrics is another area I would be interested in. I just want to have an impact on people’s lives through healthcare.

“I’ve had a lot of setbacks that kept me out of running. I’ve learned not to take being healthy for granted. Just being able to compete and train is something I’m very grateful for.”

Dominique started running competitively at a young age and had some struggles in fueling her body properly for her sport.

“I’m a perfectionist, and I fell into the trap of trying to do everything right, so much so that I had to be hospitalized,” Dominique said. “I’ve had to see different specialists to make sure I was on the right path and staying healthy. Coming to college, I’ve continued to prioritize my mental and physical health. Dr. (Zoe) Foster is one of our team doctors, and she has been very helpful. The resources here are really good, and I have felt very supported during my time at USC. Between the dietician that I see (Kristin Coggin), Dr. Foster, and the coaching and training staff, they’ve been great at making sure I’m doing well in multiple aspects. It has made me more grateful for my health.

“I have a hard time being vulnerable, but I want to show that it’s possible to come out on the other side of a rough time, find balance, and be successful. And if sharing my story can help at least one person who may be struggling, it’s worth it.” 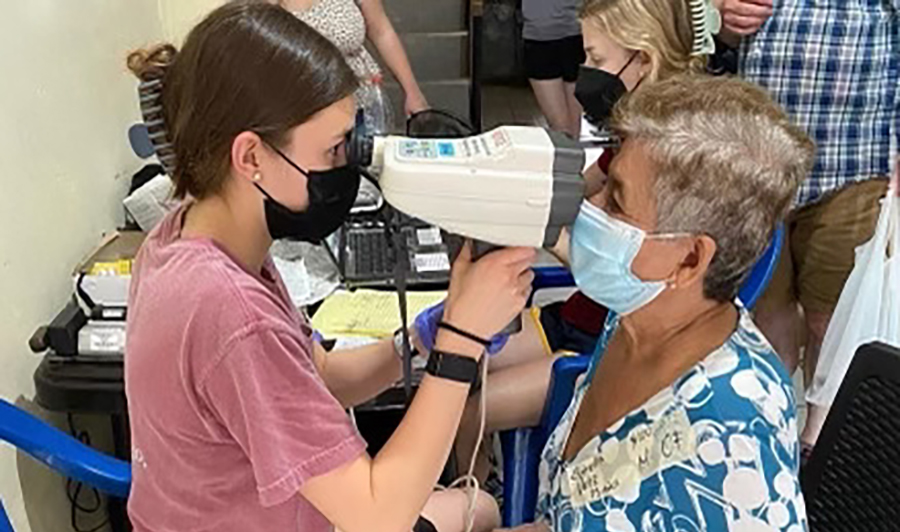 “I think being able to help other people gives me a lot of joy in how I can impact others.”

Dominique has flourished in her sport and in the classroom. She was named to the SEC Academic Honor Roll last spring and has been one of the Gamecocks’ top cross-country runners this fall. In the first two meets, she finished second overall at the Winthrop Invitational and was fourth at the Carolina Challenge to help South Carolina take first place in both outings.

“It is kind of difficult to balance everything between academics, our practice and travel schedule, and other things I’m involved with on campus, as well as being social and having a life outside of athletics,” Dominique said. “I do like being involved with my church on campus.”

Dominique has seen firsthand the impact doctors can make outside of the athletics arena as she has volunteered to go on a pair of church-sponsored trips over the last two years, including one to Ecuador with doctors over spring break.

“That’s something that I’m passionate about,” Dominique said. “We had a medical and optometry clinic there. That was a really cool experience. We went to three different places. We had an American doctor that came with us and at least one or two Ecuadorian doctors at each clinic. The local people would come and could be seen for almost any issue. We also focused on educating them on how to live a healthier lifestyle. We also brought an optometrist with us, and we got to see a lot of people with impaired vision. We had a lot of glasses donated that we brought with us.

“I was able to shadow the doctors a little bit in the medical clinic, and I measured the patients’ vital signs. In the optometry clinic, I used the autorefractor on the patients and that would go to a computer to help fit them for glasses.”

Having that hands-on experience furthered her desire to help others.

“We were limited in what we could do because there were so many people, and there was only so much time we could spend with each person,” Dominique said. “It was really cool to see how the doctors interacted with patients. I had a little more hands-on experience in the optometry clinic and seeing how grateful the people were when they got glasses and were able to see, it was definitely a moving experience.”

She has also traveled to the Texas/Mexico border for a service-learning trip and learned about immigrants seeking asylum.

“One of the main things we did was work in a Catholic Charities respite center, and I had the chance to help give the people who were taking a break on the journey some cosmetic products, medicine, and clothes to help them feel comfortable,” Dominique said.

While she is still trying to figure out which direction she will go in the medical profession, Dominique’s experiences and desire to care for others has her on the right path.

“I think being able to help other people gives me a lot of joy in how I can impact others,” Dominique said. “For us it seems simple to get a pair of glasses, but for others, it changes their whole life.

“As a health care provider, being able to understand what your patients are going through is important and gives you a different perspective while enhancing your ability to care for your patients.”