Delayed But Not Denied

Raven Johnson was hoping to make an impact for South Carolina right away as a freshman last season. Instead, the highly touted point guard from Atlanta suffered a season-ending knee injury in the second game of the season and had to watch from the bench as the Gamecocks won their second National Championship.

“Honestly, I think the injury is going to turn out to be for the best for me,” Johnson said. “It has made me physically and mentally stronger. Just watching the others last year, it made me feel like a coach. From the bench, you see things that you don’t see on the court. I definitely learned a lot through this experience.”

“There’s pressure. We know every team is going to attack us because we won it all last year.”

Johnson was named the Naismith and WBCA High School Player of the Year and was the No. 1 ranked point guard in the nation coming out of Westlake High School. She was expected to see a lot of playing time last year behind senior Destanni Henderson. Much of the last year has been spent getting well.

“Rehab was crazy,” Johnson said. “I will tell anyone who has to go through this to attack rehab. It will hit you hard, and it’s going to make you cry some days. You’re going to have days where you don’t want to eat and you get depressed, but the good thing was that I had my teammates and coaches there to help me through that process. It was very challenging.”

With the nickname “Hollywood,” Johnson doesn’t lack confidence in her abilities, but there is always a mental challenge in coming back from such an injury.

“The mental part is tough,” Johnson said. “Now, in practice, I’m not scared. They have to slow me down sometimes. I’m just happy to be back on the court. You know all the work you had to do to get back on the court, so you have to trust the process and the people who put their time into you. You have to keep a positive mindset.”

As a point guard for the Naismith Hall of Famer and South Carolina head coach Dawn Staley, Johnson knows there are lofty expectations in directing the offense.

“I like to push it in transition and make my teammates better,” Johnson said. “As for things I can work on, I think I can be better communicating and being a leader.

“There’s pressure. We know every team is going to attack us because we won it all last year. We’re the team to beat, but with the team that we have, if we just trust each other and Coach Staley’s system, you shouldn’t feel any pressure. Just trust the process and play the game.”

Fortunately for Johnson, even though it is her second year with the team, she doesn’t feel pressure to be a star as the Gamecocks added some depth at the position in the offseason with graduate transfer Kierra Fletcher coming in from Georgia Tech.

“My goal this year is just to win a National Championship.” 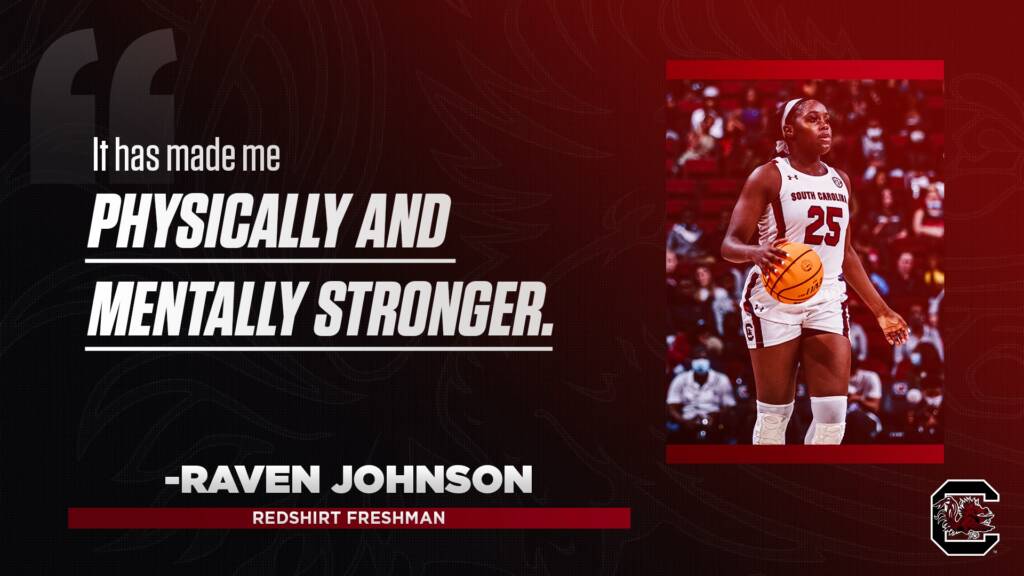