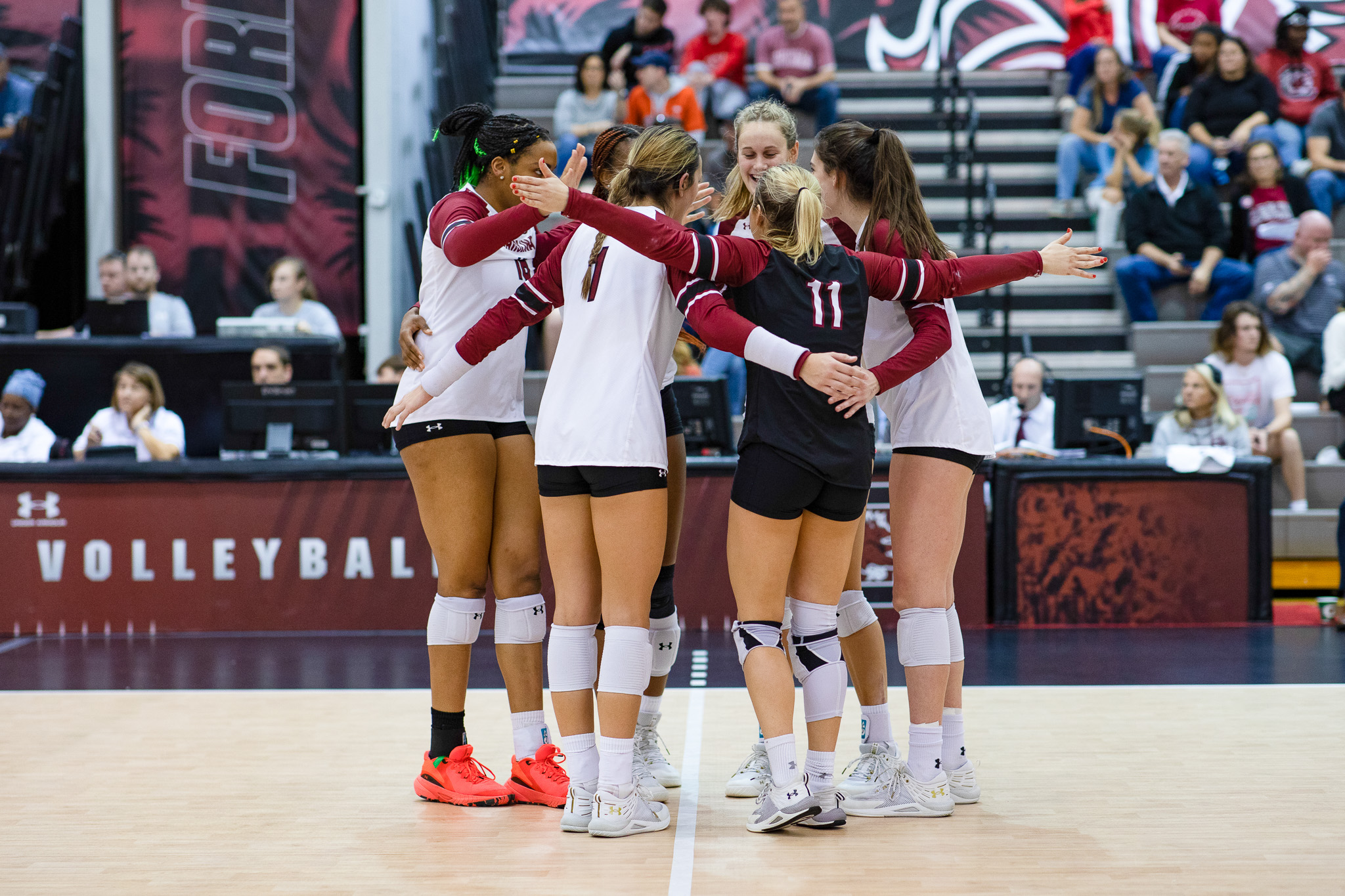 FAYETTEVILLE, ARK. – South Carolina volleyball aims to snap a two-game losing streak when it kicks off a three-game week on the road at Arkansas Wednesday night. First serve against the Razorbacks (14-7, 5-6 SEC) is scheduled for 8 p.m. ET with the SEC Network carrying the broadcast and Eric Frede and Holly McPeak on the call.

The Gamecocks (10-10, 4-6 SEC) will return home to the Carolina Volleyball Center to wrap up the week with a pair of matches against Ole Miss (10-10, 6-4 SEC) on Saturday and Sunday. Saturday’s opener will be at 2 p.m. on the SEC Network+ and Sunday has a 4 p.m. first serve on ESPNU.

SCOUTING THE RAZORBACKS
The Razorbacks are one of the breakout teams of the fall, not just in the SEC but nationally. Arkansas enters Wednesday night ranked just outside the top-25 and are 14-7 overall and 10-3 at home. Most recently, the team dropped its weekend series at Florida, 3-0 and 3-2, but were playing without all-conference pin hitter Jillian Gillen, who is hitting .252 with 3.74 kills per set this season. Complimenting her on the attack is Taylor Head, who leads the team in total kills (270) while still hitting .281. Arkansas’ offense is one of the best in the nation, ranking top-40 in the country for both hitting percentage (27th) and kills per set (13.75). On defense, the team is led by Auburn transfer Tatum Shipes, who has more total blocks (104) than total kills (92) this season but accounts for 40 blocks more than any other member of the team. On the back line, libero Courtney Jackson averages a team-high 3.53 digs per set and also is the team leader for service aces (24).

SCOUTING THE REBELS
Ole Miss has stepped up for interim head coach Bre Henry, who replaced Kayla Banwarth on October 20. In the three games since taking over, Henry has led the Rebels to three wins, beating Missouri twice and MIssissippi State most recently on the road. SInce starting SEC play 0-3, Ole Miss now stands in the top third of the standings with a 6-4 overall record heading into its Wednesday night home match against Tennessee. Ole Miss is another imposing offense, ranking second in the SEC with 13.81 kills per set while still hitting an efficient .250 as a team. Fifth year senior Anna Bair leads the efforts with 3.66 kills per set, but four other Rebel hitters have also chipped in at least 150 kills as well. Blocking is what drives the Ole Miss defense, both middles (Sasha Ratliff and Payton Brgoch) average over a block per set and the team sits fifth in the SEC with 2.49 blocks per set.

JOHNSON OFFERS NEW OPTION FOR THE LINEUP
Not every team has the benefit of adding a potential impact starter at the mid-point of the season, but South Carolina may have one with freshman Alayna Johnson. The freshman pin made her first collegiate start on Sunday, Oct. 2 against Missouri and finished with seven kills in the three-set sweep. She followed that with a team-high 14 kills at Tennessee on Oct. 8.

Johnson, a Kershaw, S.C. native, enrolled early at South Carolina, joining the team last January. She was a five-year varsity starter at North Central High School with her father Andy as her head coach, winning four region titles in a row. She was the driving force behind North Central making its first trip to the state championship in almost 30 years in her senior season.

DON’T HIT IT TO HAMPTON
Libero Jenna Hampton has raised her game another level in SEC play. Nearing the halfway point in the conference season, Hampton has 190 digs and has been aced nine times while averaging 4.97 serve receptions per set. From Sept. 28 to Oct. 8, she had a stretch of four games in a row where she had at least 23 digs, giving her five total games with 20 or more digs this fall. Only three other Gamecocks have as many 20-dig games as Hampton during the rally-scoring era (since 2001): Aubrey Ezell (2017), Paige Wheeler (2011) and Hannah Lawing (2010). The last member of the program to have more 20-dig games than Hampton was Fernanda Laires, who had nine in 1996.

For the season in total, Hampton’s 333 total digs accounts for just a shade under 35 percent of the team’s dig total and is just shy of matching the team’s second, third and fourth-ranked individuals’ combined total. In serve reception, she is second on the roster with 380 total receptions (4.87 per set).

IT JUST MEANS “MOOR”
As head coach Tom Mendoza said after the team’s wins against Sacred Heart and Omaha on Friday, Aug. 26: “Kenz had one of the better days as an attacker that you could possibly ask for.” Senior McKenzie Moorman totaled 42 kills and a .478 hitting percentage over the team’s three wins in week one. Since 2001, only five other Gamecocks had 40 or more kills in the first three games of a season, but none of their hitting percentages came close to Moorman’s .478 clip.

It was the jumping-off point for a breakout season for Moorman. She leads the team in kills while also hitting .234. Her 228 kills in 78 sets to date are more than her kill total from her first three seasons combined (124 sets, 52 matches played). Her hitting percentage is almost 30 points higher than her career average entering 2022 (.207). Her defense is on the uptick as well, she already surpassed her career high for blocks in a season (27 in 2020-21) after only 12 games and currently has 52 total blocks and a career-high 26 digs as a front-row-only defender.

GAMECOCK NATION PACKS THE GYM
Gamecock fans are out in full force this season, South Carolina currently ranks 43rd nationally in average attendance (1,189) and 45th in total attendance (13,075), despite having the smallest capacity of any team ranked ahead of it.  Dating back to 2014, the Gamecocks volleyball program is averaging at least 1,000 fans per game every season.

BATTLE-TESTED IN THE BACK ROW

South Carolina’s identity this season is defense-first, thanks in part to a wealth of experienced passers. The Gamecocks brought back players who accounted for 73.7 percent of the total serve receptions from 2021 and added in an All-Big 10 libero in Jenna Hampton. Opponents have tested junior Riley Whitesides early and often this season, her 566 total serve receptions are almost 200 more than the next closest Gamecock (Hampton, 380) but her .959 reception percentage is the highest on the team. Looking back over the last 20 seasons, Whitesides is one of only six total members of the program with a reception percentage north of .950 with 500 or more total receptions, the most recent Gamecock to accomplish that feat was Addie Bryant in 2019 (592 receptions, .961 reception percentage).