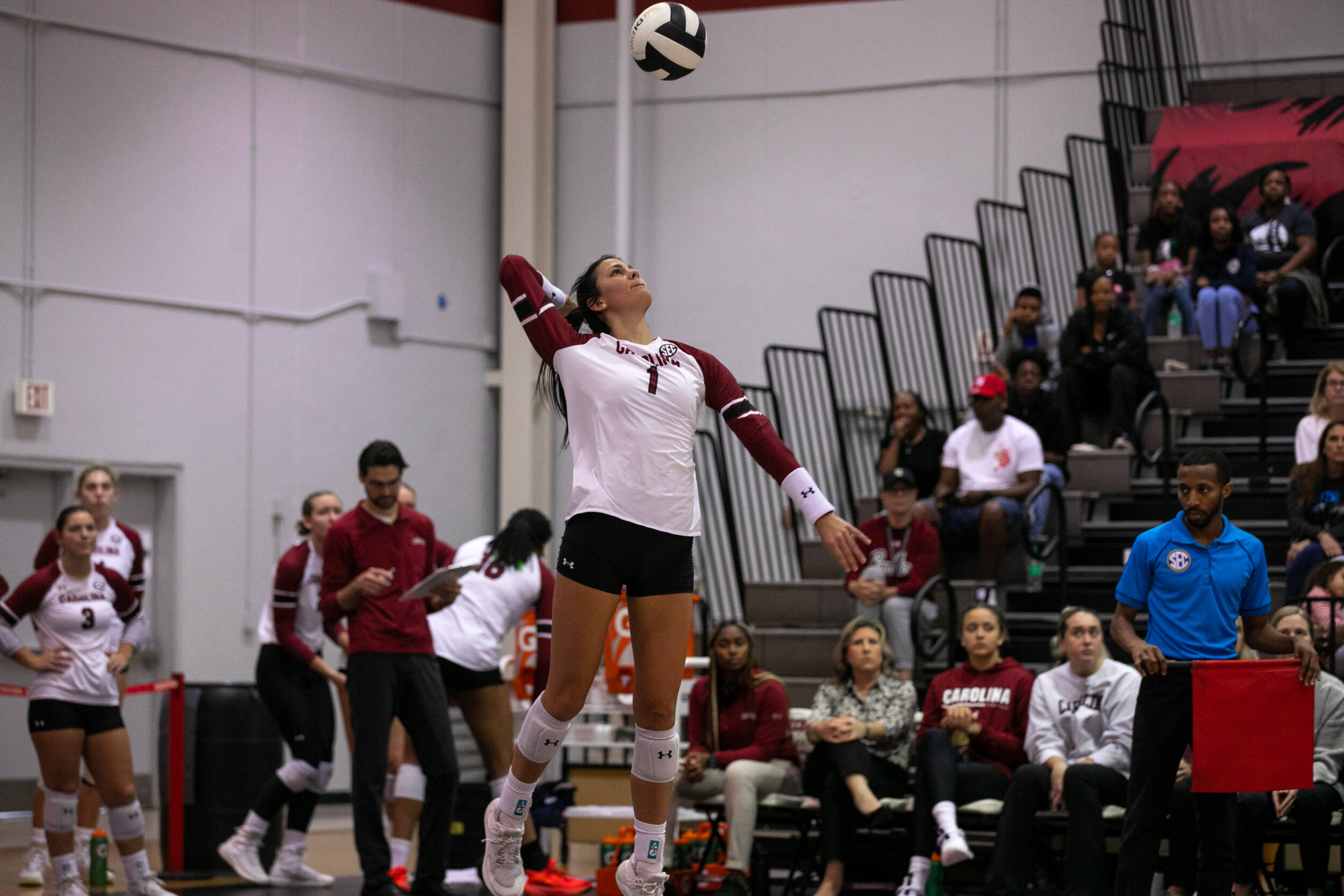 COLUMBIA, S.C. – South Carolina (10-12, 4-8 SEC) lost a shootout with Ole Miss (11-11, 7-5) on Saturday afternoon. Both offenses averaged about 15 kills per set and each hit over .250, but it would be the Rebels that leaned on a trio of hitters to carry them to the win. Lauren McCutcheon led the Gamecock offense with 15 kills on a .314 hitting percentage, Oby Anadi had a career day offensively with nine kills on just 13 swings.

1st SET: Some unforced errors cost South Carolina in the opening set, a 25-22 win for Ole Miss. The visitors broke away from a 14-all tie with four unanswered points, but the Gamecocks were able to claw back to tie the set again at 21. Ole Miss used three kills and a block from there to end the game on a 4-1 run. Riley Whitesides led the team with four kills, but it was four service errors and nine attacking errors overall for South Carolina that proved costly.

2nd SET: Ole Miss’ offense had its best showing of the day in the second, hitting .378 with 19 kills in a 25-23 set win to go up 2-0. Despite those numbers, it was South Carolina that was in the driver’s seat for the early going, with an early 12-6 lead following a block from Kiune Fletcher and Anadi. The Gamecocks held a comfortable lead until a strong closing effort for the Rebels. Down 19-15, Ole Miss score nine of its final 10 points off kills to roar back for the win.

3rd SET: South Carolina responded in kind with its best offensive performance in the third set. The Gamecocks rode the arm of McCutcheon, who finished with seven kills on 11 swings in the third, to finish the set hitting .395 overall with 17 kills and just two errors. The defense would also step up, with four solo blocks and five total blocks in the set.

Despite the gaudy numbers, it was still a battle late. A key block from Whitesides made it a 22-20 advantage for Carolina, but three quick kills from the Rebels soon gave them a set-point opportunity at 24-23. The Gamecocks were able to fend off that threat as well as another at 25-24; McCutcheon got a kill to tie the score at 25, then a solo to set up the team’s first set point chance and finished Ole Miss off with another kill.

4th SET: The Gamecocks weren’t able to ride the emotions from set three into the fourth, allowing Ole Miss to take control in the mid-game and finish the match with a 25-21 win. South Carolina led 12-11 before a bit push from their opposition, Ole Miss scored 10 of the next 15 points with five of the 10 Rebel points coming off unforced errors from the Gamecocks. Out of a timeout, Carolina drew within two points, 21-19, before the Rebels scored the next three points and closed out the match.

UP NEXT
The team’s face each other again in less than 24 houra, the Sunday rematch is scheduled for 4 p.m. on ESPNU. Follow @GamecockVolley on Twitter for updates on the team.