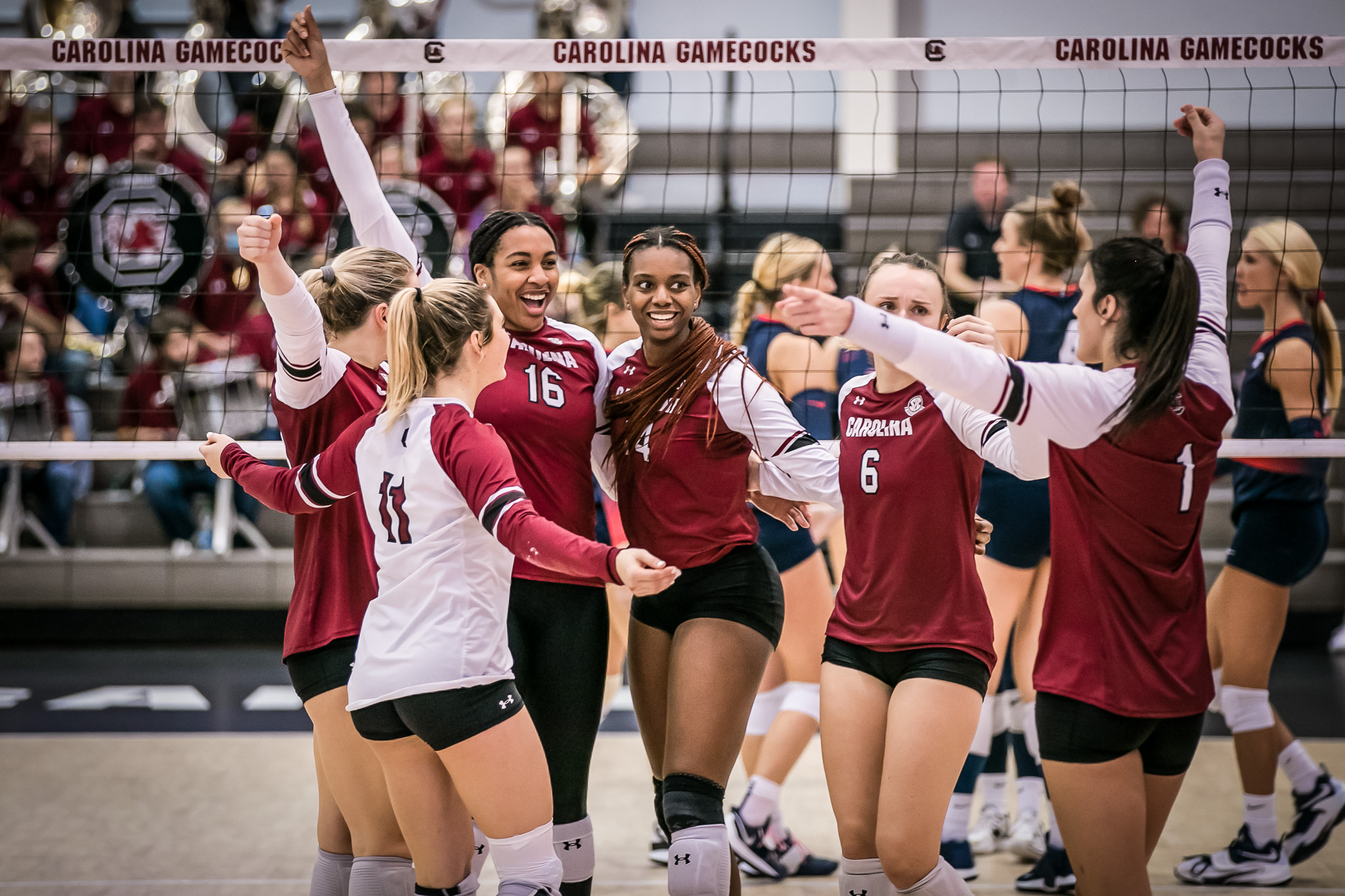 TUSCALOOSA, ALA. – South Carolina volleyball begins its final stretch of five games with two on the road at Alabama, Nov. 11-12. The Gamecocks (11-12, 5-8 SEC) have won three games in a row at Alabama, he two sides have traded extended winning streaks in the series with South Carolina at 6-1 in the last seven meetings following a stretch of seven consecutive wins for the Crimson Tide. Both the 7 p.m. ET Friday match and the 3 p.m. ET Sunday match will air on the SEC Network+.

SCOUTING THE CRIMSON TIDE
Alabama has some strong pieces in place under first-year head coach Rashinda Reed and has played stronger with each game down the stretch. Most recently, the team went on the road and defeated Texas A&M and also came close to upsets of LSU and Georgia, losing both by a 3-2 margin. Despite the new coaching staff, the Crimson Tide is led by some familiar faces. The three leading attackers are vets, led by junior pin Kendyl Reaugh’s 3.15 kills per set. Alyiah Wells left the team briefly last season but returned this fall to great acclaim, currently hitting .340 with 2.62 kills per set. Rounding out the top three is Abby Marjama, who averages 2.24 kills per set but also paces the SEC with 58 service aces. On defense, Wells also is the team leader for blocks, with 99, which is more than the next two Tide blockers’ total combined.

DOUBLE TROUBLE IN THE MIDDLE
South Carolina’s identity this fall has been defense and the numbers have proved that out. Currently, the team ranks 24th nationally in blocks per set (2.60), thanks in large part to its two starting middles, Ellie Ruprich and Oby Anadi. Ruprich was a known commodity coming into the season – she is just the third player since the turn of the millennium to lead the team in blocks in each of their first two seasons – but the team looked for a new face after the late-season injury and ensuing graduation of Mikayla Robinson.

Anadi has filled that role admirably, currently sitting at 99 total blocks (19 solo) with five games still to play. With just one more block, the Gamecocks would have two players hit triple digit blocks for just the fourth time since 1999. The other pairs to do it were Robinson and Claire Edwards in 2019, Lauren Ford and Nicole Miller in 2004 and Niece Curry and Berna Dwyer in 2002.

FLETCHER ENJOYS STRONG WEEKEND FINALE
The Gamecocks are pulling for a new face in the offense over the final five matches of the season and following the win over Ole Miss on Nov. 6, that very well could be junior Kiune Fletcher. The athletic right side attacker hit .500 with 15 kills against the Rebels, almost doubling her previous career high of eight. She also set a new career high with six total blocks. Fletcher’s kill total was one shy of her freshman year total that she accumulated over 22 sets played and 44 total attacks.

RUPRICH REACHES HISTORIC MILESTONE, CHASES MORE
Thanks to a team-high eight total blocks in the win over Ole Miss on Nov. 6, Ellie Ruprich matched her career high with 112 blocks so far in 2022 and went over 300 total blocks for her career. The junior middle is the sixth woman in the rally scoring era (since 2003) to reach 300 blocks and currently ranks eighth for most total blocks in a season for the era. She ranks 4th in the SEC and 27th nationally with 1.32 blocks per set, an average that puts her on pace to set the program’s rally scoring era season record for the category, currently held by Lauren Ford (1.27, 2004). With five matches to play, Ruprich still is within range of the single-season solo blocks record (currently with 26, needs to reach 33) and is just four block assists away from entering the top 10 for a single season (currently with 86, needs to reach 90).

DON’T HIT IT TO HAMPTON
Libero Jenna Hampton has raised her game another level in SEC play. With five games to play, Hampton has 275 digs in SEC matches alone and has been aced 11 times while averaging 5.18 serve receptions per set. From Sept. 28 to Oct. 8, she had a stretch of four games in a row where she had at least 23 digs, giving her five total games with 20 or more digs this fall. Only three other Gamecocks have as many 20-dig games as Hampton during the rally-scoring era (since 2001): Aubrey Ezell (2017), Paige Wheeler (2011) and Hannah Lawing (2010). The last member of the program to have more 20-dig games than Hampton was Fernanda Laires, who had nine in 1996.

For the season in total, Hampton’s 378 total digs accounts for 35 percent of the team’s dig total and is just shy of matching the combined total of team’s second, third and fourth-ranked individuals. In serve reception, she is second on the roster with 446 total receptions (5.01 per set).

GAMECOCK NATION PACKS THE GYM
Gamecock fans are out in full force this season, South Carolina currently ranks 48th nationally in average attendance (1,151) and 38th in total attendance (14,960), despite having the smallest capacity of any team ranked ahead of it.  Dating back to 2014, the Gamecocks volleyball program is averaging at least 1,000 fans per game every season.

BATTLE-TESTED IN THE BACK ROW
South Carolina’s identity this season is defense-first, thanks in part to a wealth of experienced passers. The Gamecocks brought back players who accounted for 73.7 percent of the total serve receptions from 2021 and added in an All-Big 10 libero in Jenna Hampton. Opponents have tested junior Riley Whitesides early and often this season, her 680 total serve receptions are over 200 more than the next closest Gamecock (Hampton, 447) but her .966 reception percentage is the highest on the team. Looking back over the last 20 seasons, Whitesides is one of only six total members of the program with a reception percentage north of .950 with 500 or more total receptions, the most recent Gamecock to accomplish that feat was Addie Bryant in 2019 (592 receptions, .961 reception percentage).