Gamecocks Advance to Round Two with Shutout Over Wake Forest

COLUMBIA, SC – The three-seeded South Carolina women’s soccer team (14-3-5) emerged victorious in a rainy battle against the Wake Forest Demon Deacons (9-6-4) on Saturday, punching their ticket to round two of the NCAA Women’s Soccer tournament with a 2-0 win. 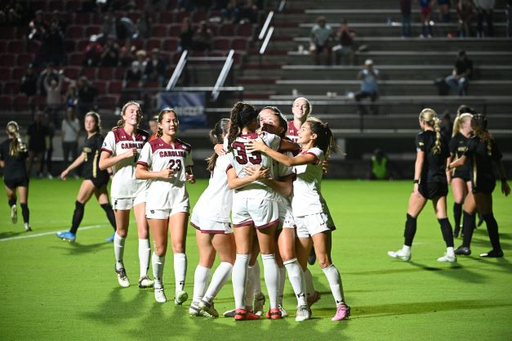 Fans that stuck out the rain saw no shots from either side until the first came from Wake Forest’s Hannah Johnson in the 11th minute, coming off wide. The Deacons’ Emily Morris followed suit three minutes later but couldn’t quite connect.

The Gamecocks then took over, with a shot coming from Corinna Zullo in the 15th minute. South Carolina then set up for a corner kick in the 18th minute, where Jyllissa Harris made the serve but the ball arched it’s way perfectly into the top left corner of the net and put the Gamecocks up 1-0 early in the game. The goal was her second of the season and the 16th of her career.

Three more attempts would be made before the half, but the Gamecocks held on to their one goal advantage as the first 45 expired.

IN HEATHER HINZ WE TRUST 😤 pic.twitter.com/mVw4n4thSU

The Deacons were the first to give themselves a chance in the second half, with Alex Wood making the shot but coming up empty handed. Five separate Gamecocks then rallied together to give South Carolina even more possibilities, until a shot off the crossbar from Abby Hugo allowed Catherine Barry to capitalize on her position in the box and send in past Wake Forest keeper Kaitlyn Parks and put her team up 2-0. The goal was Barry’s eighth of the season, and 22nd of her career.

Wake Forest attempted four more shots throughout the remainder of the game, but could not find a way back.

South Carolina ended the night with a 10-9 shot advantage (4 on goal), and took two corners. Senior keeper Heather Hinz tallied one save.

South Carolina will travel to Durham, NC to take on six-seeded Harvard on Friday, Nov. 18. A time will be announced when made available.