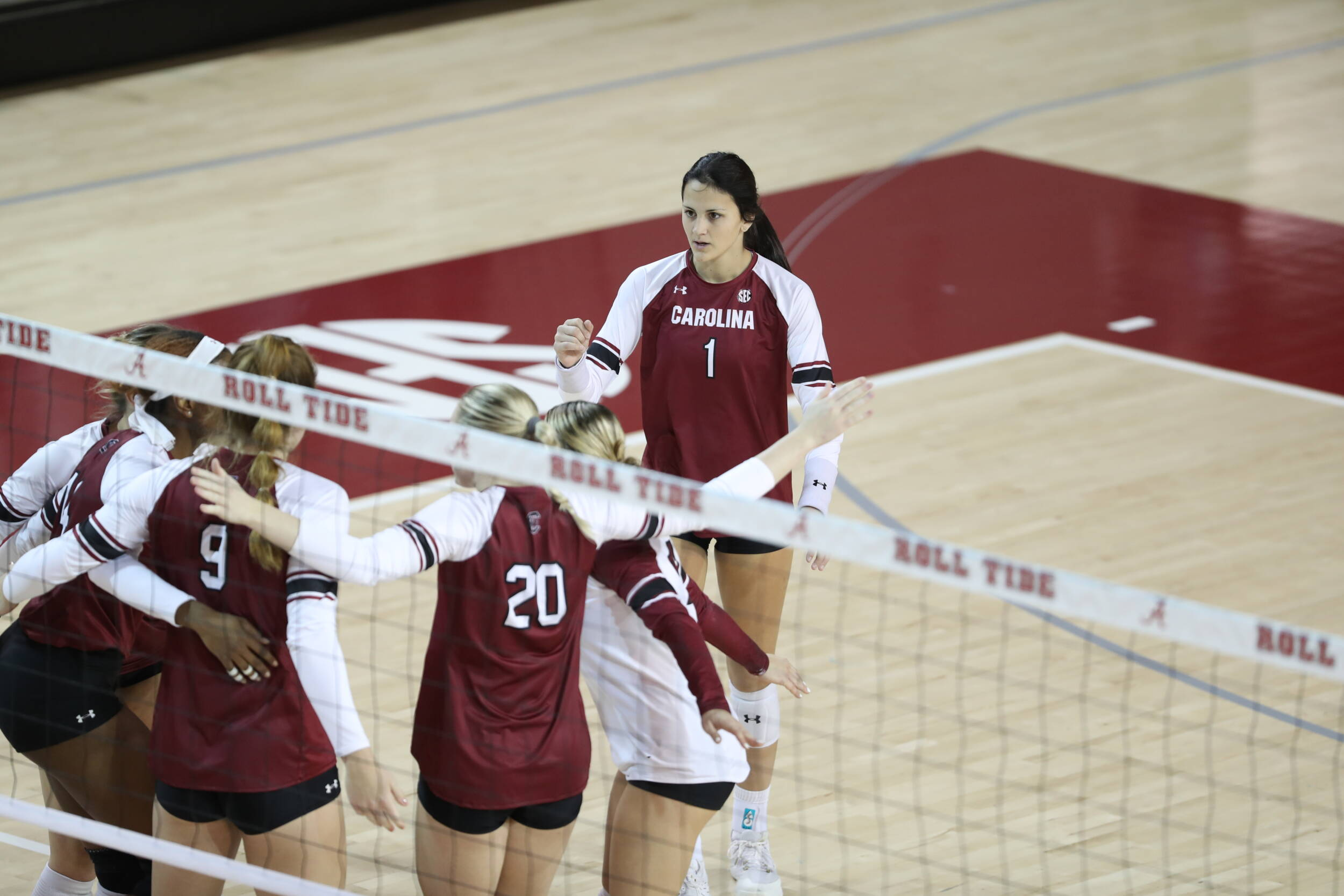 TUSCALOOSA, ALA. – South Carolina (12-13, 6-9 SEC) dropped its Sunday rematch with Alabama (9-17, 3-11) in three sets on Saturday afternoon. The Gamecock offense wasn’t able to match the Tide hitters, nullifying a strong 14-block match from the team’s defense. In all, there were 32 ties and 17 lead changes across the three sets, two of the three going beyond 25 points.

1st SET: Neither side would be particularly crisp to start the match, with 27 combined errors in the opening set. The Gamecocks held the advantage early but Alabama worked its way back to tie the score back up at 13. There would be seven ties and three lead changes from there, leading to South Carolina with the first set-point opportunity at 24-23. The Tide scored the next two for their first set chance at 25-24, the Gamecocks were able to fend off the first but dropped the next two for a 27-25 loss. South Carolina’s offense hit just .068 with eight errors, freshman Alayna Johnson led the attackers with three kills. The Gamecock defense finished with five blocks, three from Lauren McCutcheon.

2nd SET: Alabama opened up a comfortable lead to start game two using a 5-0 run to make it 11-5. The Gamecocks traded off points until it found its run at the halfway point, using a hot streak from their blockers to make a move. The defense had four blocks in an 8-1 run, the final block giving Carolina a 17-16 lead. Out of an Alabama timeout, the home side was able to clean up its side of the net and scored a 6-1 run to answer and finished off the set at 25-22 for the 2-0 lead.

3rd SET: The third set would be the closest of the day, with a whopping 17 ties and eight lead changes before the Crimson Tide won 28-26 to clinch the match. After South Carolina dominated at the net for the first two sets, Alabama had its best blocking performance in the third with a 6-2 advantage. South Carolina was able to fend off match point at 24-23 and a kill from McKenzie Moorman provided a set-point opportunity at 25-24 but that would be the team’s only shot to extend the match.

UP NEXT
The Gamecocks have an open week before gearing up for the final three games of the regular season. The next match will be the home finale, hosting Auburn on Nov. 23 at 2 p.m. ET. The team then travels on Thanksgiving day and plays at Kentucky on Nov. 25 and 26. Follow @GamecockVolley on Twitter for continued updates on the team.