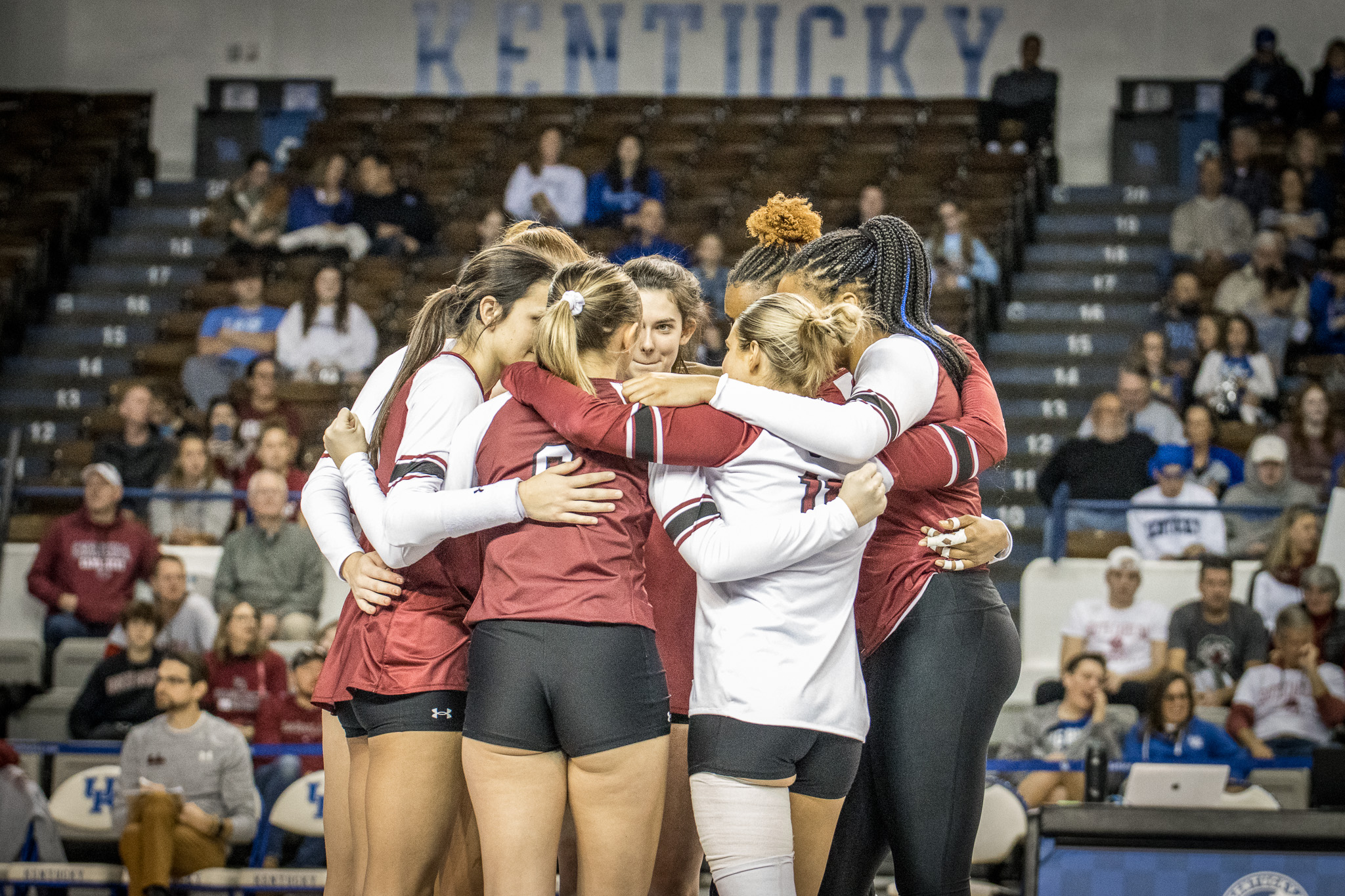 LEXINGTON, KY. – The 2022 Gamecock volleyball season came to a close on the road at Kentucky Saturday afternoon, South Carolina (13-15, 7-11 SEC) lost in straight sets to the 16th-ranked Wildcats (20-7, 15-3). The team was led offensively by sophomore Lauren McCutcheon (11 kills, .370 hitting percentage) and Jenna Hampton led the defense with 14 digs in her final match.

1st SET: South Carolina played clean from the jump, not committing an attack error until its 23rd swing of the set to build an early lead. Trailing 5-4, the Gamecocks used back-to-back blocks to spark a run of six of the next seven points to flip the score in their favor. Kentucky answered that with a 5-0 run and went into the first timeout of the game with a 15-14 advantage. After trading points, the Wildcats were able to make the decisive run with a 4-0 burst to push ahead 21-16 and closed out the set with a 25-21 win.

The Gamecocks drew within one, 22-21, behind five UK errors but the home side recovered with the next three. Jenna Hampton was the highlight of the set, accounting for nine of the team’s 15 total digs in the set. On offense, Alayna Johnson and Kiune Fletcher had three kills apiece.

2nd SET: Game two followed the same script as the first, the Gamecocks used a clean offensive effort to race ahead, again going without an attack error until late in the set. A kill from McKenzie Moorman got her side to 15 first, a 15-11 lead for South Carolina, but Kentucky scored the next six points to rally back. The Gamecocks drew even again at 17, then gave up another 6-1 run as the Wildcats went back ahead. Kentucky led 23-18 before South Carolina made its final run, scoring seven of the next eight points to earn a set point opportunity at 25-24.

Kiune Fletcher started the run with a kill and a block on back-to-back points, freshman Kimmie Thompson put an exclamation point on the run with her first career service ace. The Wildcats scored the next two points for their fourth set point opportunity of the game, but Lauren McCutcheon answered all on her own with a kill and service aces to make it 27-26 for Carolina. That would be the final set point chance for the Gamecocks; Kentucky scored the final three points for the 29-27 win.

3rd SET: Kentucky would claim the lead out the gate in the third and would not trail in a 25-16 score to clinch the match. South Carolina was able to draw within one several times early, the last coming at 11-10, but the Wildcats scored a 7-2 run from there to put the deficit out of reach. McCutcheon led the attack with four kills, but Kentucky committed just two errors and hit .440 on the other side to finish off Carolina.

UP NEXT
Season No. 49 for South Carolina volleyball is now complete. The Gamecocks say goodbye to seven graduating members of the program – Gabby Brown, Camilla Covas, Holly Eastridge, Jenna Hampton, Dalaney Hans, McKenzie Moorman and Janna Schlageter. Follow @GamecockVolley on Twitter for continued updates on the team throughout the spring exhibition season and into the summer.