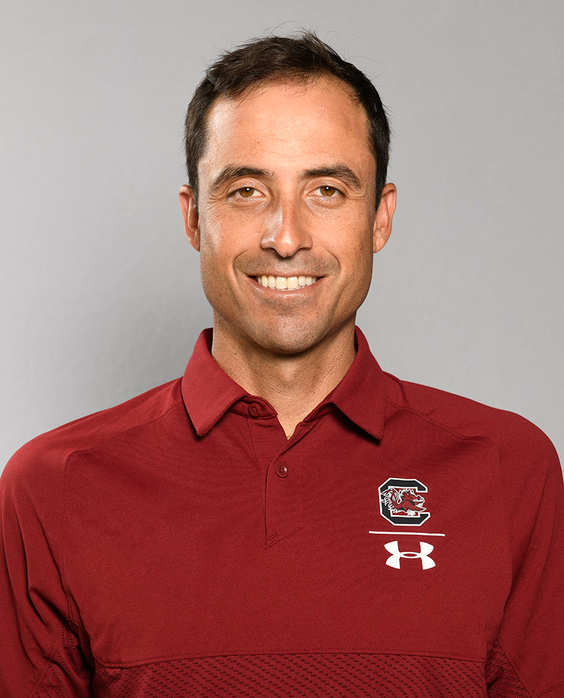 Earning his first college head coaching position at South Carolina in July 2010, Josh Goffi wasted little time cementing his reputation as an elite recruiter—landing a pair of top-10 signing classes in his first four seasons — with a solid strategic mind and excellent player development skills. In 11 seasons, he has crafted a culture that builds more than just a tennis player.

“A mistake a lot of coaches and CEOs make is putting the product first,” Goffi said. “They go after that instant gratification or the immediate profit. That’s easy. We can recruit those kids to get immediate results. But what we do is go after the kid with the character and the backbone to take on that heavy load to really be successful, and the end result is going to be something phenomenal. That is what we’re looking for – kids who have the depth that can take the progression to be a Gamecock tennis player. We attack the person first, get in there to develop those skills and steps, those character traits that are necessary for success. From there, the tennis is easy. At some point, your tools will be there. But, a tennis player is not built on tools. That is just part of the game. The actual successful tennis player has a deep, deep well that he can dig into. So, you have to develop that trait first.”

Goffi’s culture has bred success with the Gamecocks earning an NCAA Tournament bid seven times in his tenure. Averaging 18.75 wins over the last four regular seasons (2020 cut short due to COVID-19 pandemic), South Carolina has finished each of those in the ITA Top-25, marking the first such stretch in program history. Under Goffi, the Gamecocks have collected four All-American honors, 15 All-SEC selections and the program’s first SEC Scholar-Athlete of the Year award. In 2019, Paul Jubb became the first NCAA National Champion and the fourth Gamecock to play at Wimbledon. He also collected the program’s second Rafael Osuna Sportsmanship Award. In 2021, Daniel Rodrigues matched Jubb’s program-best final singles ranking of No. 3 after advancing to the final match of the NCAA Singles Championship.

The 2021 season was one that filled the record books, which propelled Goffi to ITA Carolina Region Coach of the Year honors. With a record of 17-10 on the year, the team was selected to the NCAA Tournament and made it to the Round of 16 for the first time since 2005. The team ended the season with a final ranking of No. 13, the program’s best final ranking since 1988-89. Three Gamecocks earned All-SEC status, including a pair of first-team selections for the second time in as many seasons. Goffi’s team also boasted the ITA Carolina Region Rookie of the Year (Toby Samuel) for the second time in the last three seasons. Rodrigues’ run to the Singles National Championship match made South Carolina the first program to have back-to-back finalists since Baylor in 2004-05.

The 2020 season was one unlike any other. The team began the season with 5 straight wins and was working their way up the rankings with a 8-3 record before the season was unexpectedly cut short due to the COVID-19 pandemic. In the shortened 2020 season, the Gamecocks rose to No. 12 in the national rankings, the program’s highest mark since 2006.

Goffi experienced a pair of firsts in 2019 as he coached junior Paul Jubb to the NCAA Singles National Championship – the first in program history – and went on to watch his protégé compete in the Main Draw at Wimbledon. Overall, the Gamecocks continued to thrive under his leadership with a 18-10 record, a No. 19 final ranking and a spot in the SEC Tournament semifinals and the NCAA Tournament. Jubb and Daniel Rodrigues became the first Gamecock duo to earn First-Team All-SEC status and went on to collect regional ITA honors as well.

Goffi’s leadership skills and development of a resilient culture was in full display during the 2018 season as the Gamecocks battled through the SEC season with a roster that, at times, featured only six healthy players. Despite having to manage injuries and roster changes, the Gamecocks reached their fifth NCAA Tournament with a first-round win over Old Dominion to cement their first back-to-back ITA Top-25 finishes since 2003. Additionally, South Carolina went 7-5 in SEC play to earn the first ever back-to-back winning seasons in program history.

The 2017 season was perhaps the most successful under Goffi as Carolina went 21-7 overall with a 9-3 SEC record, its first 20-win season since 2005 and the most SEC wins in the program’s history. The Gamecocks would pick up their second NCAA Tournament win under coach Goffi with a 5-0 win over East Tennessee State while Gabriel Friedrich, Harrison O’Keefe and Yancy Dennis earned bids to the NCAA Individual Championships. South Carolina finished its historic regular season with five ranked wins as five different Gamecocks notched 20 or more singles wins.

The Gamecocks opened the 2014 SEC season dropping four straight matches and fell to 7-9 on the season before pulling out of the skid to win three straight and nine of their last 13 to earn their third-straight NCAA Tournament selection. The season culminated in the program’s first NCAA Tournament win since 2005 and Andrew Adam’s All-America performance at the NCAA Singles Championships.

During the 2013 campaign, the Gamecocks powered their way to an 18-11 record and a No. 18 final ranking, the program’s highest since 2005. Goffi’s third season also saw South Carolina post the most SEC wins in school history and earn its highest conference finish since joining the league in the 1991-92 campaign. Three Gamecocks earned All-SEC honors in 2013 and Tsvetan Mihov earned the first All-American honors for the South Carolina program since 2003. Following the Gamecocks’ breakout campaign, Goffi brought in SEC and ITA Carolina Region Coach of the Year honors.

Goffi proved that he can develop that successful tennis player right out of the gate. In his second season (2011-12), Goffi turned a team that routinely played with three freshmen and two sophomores in the singles lineup into one that finished the season ranked No. 41 in the nation, earned a spot in the NCAA Tournament and boasted two entries in the final singles rankings as well as a top-30 doubles tandem. The youthful group doubled the team’s overall and SEC win totals from the previous season, including seven wins over ranked teams with five of those coming on the road. The team grew steadily into its success, closing the regular season by winning five of its last 10 matches before heading into postseason action.

Goffi’s coaching philosophies have been shaped by some of the best coaches in the world, including his father, 1991 World Coach of the Year Carlos Goffi. The younger Goffi grew up around tennis’ elite watching his father coach the likes of John and Patrick McEnroe, Peter Fleming and Mary Carillo, and the breadth of his exposure to elite level players and coaches helped formulate the basic tenets of his program.

Immediately a prominent recruiter, Goffi honed his coaching skills as an assistant at Arizona State (women’s, 2006-08) and Duke (2008-10), earning regional Assistant Coach of the Year honors at both (2008 West, 2010 Carolina).

Goffi’s coaching career began after spending four years on the ATP Tour from 2001-05 where he rose as high as No. 121 in doubles with 18 doubles titles. He rose to as high as No. 488 in the ATP singles rankings with six top-100 wins that included a straight-set victory over Stanislas Wawrinka.

As a college player, Goffi was a three-time All-ACC selection at Clemson University winning both singles and doubles conference championships in 1999. He helped the Tigers to three NCAA Tournament appearances and rose to as high as No. 9 in the national singles rankings and No. 3 in doubles. Off the court, Goffi was a two-time Academic All-ACC selection and earned the Tigers’ “Mr. Clutch Award” in 2001 for displaying the courage, heart and determination necessary to pull through at crucial times. He finished his college career with an 84-64 singles record and an 85-50 mark in doubles matches. Goffi earned his bachelor of science in financial management in 2001.

Goffi is married to the former Nancy Augustyniak, a former professional soccer player who spent time with the United States National Team in 2000 and 2001 after a standout career at Clemson. The couple has two daughters, Eliana and Clara.

* 2020 season cut short due to COVID-19 pandemic, including cancellation of the SEC and NCAA Tournaments.