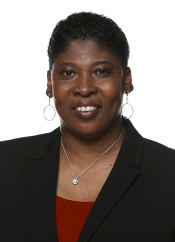 Jolette Law returned to her homestate to join the Gamecocks in June 2017, reuniting with her long-time friend in South Carolina head coach Dawn Staley. Law has been a head coach, an associate head coach and an assistant for five different programs, including some of the most successful seasons at a pair of long-time women’s basketball powers. Renowned as one of the best recruiters in the nation, she has been part of landing four top-three classes, including the No. 1 classes in 2019 and 2021 for the Gamecocks.

In 28 seasons in the coaching profession, Law has been tied to success throughout her career at Tennessee (2012-17), Illinois (2007-12), Rutgers (1995-2007), Ball State (1994-95) and, now, South Carolina. She has coached 23 players who were selected in the WNBA draft and seen 15 NCAA Sweet 16 appearances, 10 Elite 8 seasons, four Final Fours, one national runner-up finish and the 2022 National Championship to go with five regular-season conference championships and four conference tournament titles. As a recruiter, she played a key role in the Gamecocks’ pair of No. 1 classes along with helping Tennessee landing the Nos. 1, 3 and 6 ranked classes in 2017, 2013 and 2014, respectively. As the Illinois head coach, she secured the No. 3 class in 2008.

Law’s passion and energy for the game and those who play it were contagious the instant she stepped into her first practice at South Carolina. In her five seasons in Columbia, the Gamecocks have collected three of SEC Tournament titles (2018, 2020, 2021), two SEC regular-season championships (2020, 2022), two NCAA Final Four appearances (2021) and the 2022 National Championship. The program’s first No. 1 final ranking in 2020 was followed closely by the program’s first wire-to-wire No. 1 ranking in 2021-22. Four Gamecock guards have collected six All-SEC selections during her tenure, including three who have added All-America honors to that standing and two who have been taken in the WNBA Draft.

Just before joining the Gamecocks, Law helped Tennessee to a 128-46 overall record and a 60-20 SEC slate over five seasons. During her stay, the Lady Vols won two SEC regular-season championships and one SEC Tournament and made five NCAA Tournament appearances, including three Elite 8 appearances. Working primarily with the guards at Tennessee, she saw four taken in the WNBA draft (2013, 2014, 2015, 2017), including two-time SEC Player of the Year Meighan Simmons. Law played a pivotal role in recruiting, helping the Lady Vols land the top class in 2017.

Prior to her time at Tennessee, Law was named the head coach at Illinois, where she spent five seasons helping the Illini to a pair of WNIT appearances and a march to the title game of the 2008 Big Ten Tournament as Illinois posted its first 20-win season since 1999-2000. Her 2009-10 team advanced to the WNIT quarterfinals before dropping a tough game at in-state rival Illinois State. Her recruiting prowess showed early at Illinois as the Illini inked the No. 3 class in 2009, the highest rated signing class in program history. Illinois welcomed two more top-100 recruits in 2010 and one more in 2011. Law’s coaching helped develop Illinois’ highest WNBA draft pick – the 14th pick in 2010.

Law spent a bulk of her coaching career at Rutgers under legendary head coach C. Vivian Stringer. After eight seasons as an assistant coach, Law was promoted to associate head coach prior to the 2003-04 season. In her 12-year tenure, the Scarlet Knights posted a 257-125 record that included nine NCAA Tournament appearances, which were highlighted by a runner-up finish, two Final Fours, four Elite Eights and six Sweet 16s. Rutgers claimed the BIG EAST regular-season championship in 2005 and 2006 and the BIG EAST Tournament in 2007. Law worked with seven All-America selections and had eight players drafted in the WNBA.

The two-time All-Big Ten player launched her coaching career with on season as an assistant coach at Ball State after complete three worldwide tours with the Harlem Globetrotters (1990-94) as the only female member of the team at that time. During her time with the organization, she appeared with her teammates on Wheaties cereal boxes and in M.C. Hammer’s video for the song “Too Legit to Quit.”

At Iowa, Law helped Stringers’ Hawkeyes to four Big Ten titles and a four-year record of 105-18, earning First-Team All-Big Ten status in her junior and senior seasons. She continues to be widely known and respected in her hometown of Florence, S.C., after a four-year career at Wilson High during which she earned All-America status three times (1984, 1985, 1986) in basketball while also lettering in softball and track. Inducted into her high school hall of fame in 2002, she was part of the Florence Athletic Hall of Fame Class of 2006. In September 2008, she was honored as the Florence School District One Distinguished Graduate.

Law holds a bachelor of science degree in sports studies/corporate fitness from the University of Iowa, class of 1990.