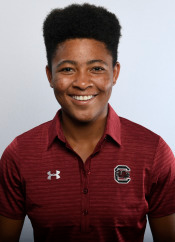 2018-19
Competed in all 10 tournaments during the season… Finished with a stroke average of 75.35… Best finish was at the Ruth’s Chris Tar Heel Invitational, finishing the tournament in a tie for 18th, highlighted by an opening round 1-under 71… Finished the season 6-0-0 in match play, including a 3-0-0 record at the 2019 SEC Championships, highlighted by a 1-UP win in the SEC Championship match vs. Ole Miss… Finished 3-0-0 in the match play portion of the Liz Murphey Collegiate Classic, helping the Gamecocks win their first-ever match play event… Ended the season on a high note at the NCAA Cle Elum Regional, carding a 3-under 69 to tie her career-best 18-hole score…

2017-18
Appeared in Carolina’s lineup in each of the team’s 10 tournaments…One of four Gamecocks to notch double-digit rounds of par or better (10)…Sported a stroke average of 74.24…Ranked third on the team with three top-20 showings…Boasted her top finish of the season at the 2018 Florida State Match-Up, sharing 12th-place honors with a 54-hole score of 215 (-1)…Tied for 18th at the 2018 SEC Championship after totaling a 222 (+6)…Won two of her three contests during the match-play portion of the conference tournament…Opened the season with a three-round mark of 213 (-3) to finish 22nd at the 2017 Mason Rudolph Championship…Finished in a tie for 40th (221, +5) at the 2018 NCAA San Francisco Regional in a stretch highlighted by a second-round 71 (-1).

Prior To South Carolina
Reached match play at the 2016 U.S. Women’s Amateur after opening the tournament with a 69 (-2)…Competed in the British Girls’ Open in 2012 and 2014 and won the lowest African score in 2014…Competed in the USGA Girls’ Junior in 2014…Won gold at the African Youth Games in Botswana representing Nigeria…Club Chef Junior Open Champion at Falcon’s Fire, shooting 9-under (67-68-72).

Coach Kalen Anderson On Uwadia
“Anita is full of raw talent. She has incredible speed, power and length. Anita has natural ability that cannot be taught, and I am extremely excited help her develop her scoring and mental game. Anita has the ability to accomplish great things throughout her collegiate career and beyond.”