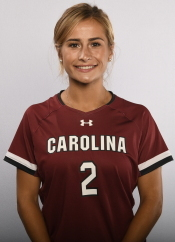 2017: Served as one of four team captains and started all 23 matches…helped the Gamecocks set a single-season program record with 16 clean sheets…five of Carolina’s 16 shutouts came against ranked foes, and its league-best 0.469 goals against average was the ninth-lowest mark in NCAA Division I…through her efforts, the Gamecocks held an opponent to three or fewer shots in 16 of their 23 games…her 1,889 minutes played ranked fourth on the team…put one of her two shots on target.

2016: Earned the start in all 24 matches after transitioning to left back…ranked second among defenders with a career-high four assists…part of a back line that helped the Gamecocks rank sixth among Division I schools with a program-best 0.41 goals against average…Carolina notched a league-leading 14 clean sheets on the year, including eight in SEC play…set up the game-winning goal in the Gamecocks’ 2-0 win over Tennessee (10/23) — the victory over the Volunteers secured the SEC Regular Season Title for the Gamecocks.

2015: Saw time in all 20 matches, making five starts on the year… tallied a career-high six points on three goals…notched her first career goal against Georgia (9/11), scoring the game-winner in the 42nd minute… also found the back of the net against Arkansas (10/2) and in the SEC Quarterfinals against Auburn (11/4)…finished the season with 11 shots and earned the start in the first round of the NCAA Tournament against UNCW (11/13).

2014: Played in eight contests, totaling 126 minutes…limited by injury in the early stages of the season…played 14 minutes in her collegiate debut against Georgia (9/28), starting a string of six-straight appearances…twice posted a season-high 29 minutes (at Alabama on 10/2 and Mississippi State on 10/30)…recorded a shot in three October contests…made her SEC Tournament debut, playing six minutes in a 2-1 win over Missouri (11/5)