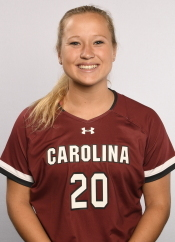 2017: Played in seven games, making one start on the year…her lone start came at home against Georgia (10/22)…appeared in two matches during the NCAA Tournament, seeing a season-high 27 minutes in the opening round against Alabama State (11/10) and 17 minutes in the Women’s College Cup semifinals against top-seeded Stanford (12/1)…did not record a shot on the season.

2016: Appeared in eight matches, totaling 143 minutes on the field…attempted two shots throughout the season…saw time in two SEC matches, playing against Kentucky (9/25) and Tennessee (10/23)…was on the field for 34 minutes in Carolina’s NCAA Tournament Opening Round match against Alabama State (11/11).

2014: Played in 14 contests (228 minutes) before injury limited the final half of her freshman season…scored two points on two assists, one on a game-winner… put four of her five shots on frame…dished an assist in her second collegiate contest on Paige Bendell’s goal in the 76th minute against Samford (8/24)…also put a shot on frame against Samford…logged a season-high 33 minutes and put a shot on frame in a 2-0 win over Milwaukee (8/31)…sent another shot in on goal against High Point (9/7) during her 30 minutes of play…made her SEC debut at Auburn in a 2-1 overtime win…logged her first shot of the SEC season against Georgia (9/28) and put it on frame…in a 1-0 win over LSU (10/5), recorded the game-winning assist on Daija Griffin’s 75th minute goal and also logged a shot, her only shot not on goal of the season…made her last appearance at Kentucky (10/10) before injury kept her off the field for the remainder of the season.