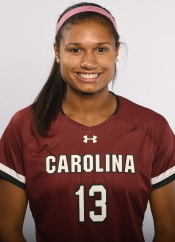 2018: Started in 14 of the 21 matches for Carolina… Scored one goal and added four assists during the season… Scored insurance goal against Auburn (9/28) in a 3-0 win… Made first career start against Fordham (8/17)… Made first career SEC start against Tennessee (9/16)… Assisted on goals against College of Charleston (8/19), Tennessee, Texas A&M (10/30) and UNCG (11/9)… Played in a season-high 68 minutes against UNCG… Registered three shots three different times during the season… Was named to 2018 SEC All-Tournament Team… A member of South Carolina’s Student-Athlete Advisory Committee… Was selected as a finalist to represent the SEC on the NCAA Division I Student-Athlete Advisory Committee.

2016: Saw time in 20 of Carolina’s 24 matches…totaled four points on two goals…netted the game-winner in the 83rd minute at UCF (8/28) and found the back of the net two matches later at home against Charlotte (9/5)…set up the overtime game-winner against No. 17 Florida (10/16), giving Carolina a penalty kick in the 103rd minute after she was taken down the box running down a pass…played a season-high 60 minutes in the Gamecocks’ 2-1 win over No. 6 Clemson (9/3) and appeared in three of Carolina’s four NCAA Tournament matches…ended the season with six shots on frame.

2015: Played in 19 of 20 matches…led all freshmen with eight points on three goals and two assists… her three goals were tied for the third-highest mark on the team…scored the game-winner on the road against Missouri (9/20), tallying an unassisted goal in the 37th minute…also notched goals at Arkansas (10/2) and in the SEC Quarterfinals against No. 19 Auburn (11/4)…recorded 24 shots and seven shots on goal.

PERSONAL: Born April 24, 1997, Simone is the daughter of Derek and Sophia Wark…has logged volunteer hours with the Canadian Breast Cancer Foundation and Racing Against Drugs…also lettered in volleyball and basketball in addition to soccer and track & field…intends to major in exercise science…also enjoys movies with friends, swimming, pilates, yoga and reading.