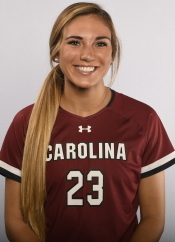 2018: Started in all 21 matches for the Gamecocks, seeing time at center back and right back… Helped the Gamecocks lead in the SEC in shutouts (12) and league-leading 0.56 goals against average… Aided in six-straight clean sheets, totaling 28 days without a goal allowed… Scored two goals during the season for a total of four points… First career goal came against Kentucky (9/23) off a header… Scored first game-winning goal against Georgia (10/4) on the road in a 1-0 win… Registered a career-high four shots against Mississippi State (9/20) with two on goal… Finished season with .583 shot on goal percentage, good enough for second on the team… Finished with a total of 12 shots, the most in any season in her career… Played in a career-high 1731 minutes during the season, including playing the entire match 10 times during the season, including both NCAA Tournament matches against UNCG (11/9) and Penn State (11/16).

2017: Started 21 of Carolina’s 23 matches, seeing time as a center back and right back…registered one point for the season after recording an assist in the third round of the NCAA Tournament against Santa Clara (11/19)…part of a Gamecock back line that helped Carolina finish ninth in NCAA Division I with an SEC-leading 0.47 goals against average…helped the Gamecocks hold an opponent to three or fewer shots on target in 16 of their 21 matches and set a new single-season program record with 16 clean sheets…played 79 minutes in Carolina’s Women’s College Cup semifinal match against Stanford (12/1)…attempted five shots for the season.

2016: Appeared in all 24 matches, becoming the only Carolina freshman to play in every game…finished the season with one point after recording an assist in the Gamecocks’ regular season finale against Ole Miss (10/27)…played a season-high 79 minutes against the Rebels…part of a back line that guided Carolina to a program-record 0.41 goals against average, the sixth-best mark among Division I schools…was on the field for 60 minutes or more six times during the season, including Carolina’s wins over No. 11 Arkansas (10/9) and No. 17 Florida (10/16)…put two of her five shots on frame.

PRE-COLLEGE: Took part in the U14, U15 and U18 U.S. Women’s National Team Camps…competed at the id2 National Selection Training Camp…played for the Eclipse Select Soccer Club under head coach Rory Dames…helped Eclipse win the 2012, 2013 and 2014 Illinois State Cup and the 2013 U.S. Youth Soccer National Championship…was a member of the 2013, 2014 and 2015 Elite Club National League (ECNL) Midwest Conference Championship teams and the 2013 and 2014 National Championship squads.

COACH SMITH ON TATUMN: “Tatumn is another defender that brings national pool experience. She will most likely be a right back for us, but she is also very good in the attack. We’re excited for what she will bring to the team this fall.”