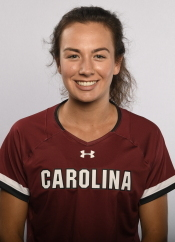 2021: Started the first 12 matches of the season on the back line before suffering an injury… Returned in time for the SEC and NCAA Tournament, where she played in all five matches… Both of her shot attempts on the season were on target, East Carolina (8/26) and Missouri (9/16).

2020-21: Had her season cut short during the fall portion of the season due to an injury… Named captain prior to the start of the season… Played, and started, in all four matches she was available for during the season… Played in a season-high 81 minutes against Kentucky… Had one shot against Georgia… Her consecutive starts streak of 49 matches was broken after her final start against Vanderbilt… Announced she will return for the fall of 2021 season after being awarded an extra year of eligibility due to the pandemic.

2019: Started all 24 matches for the Gamecocks… Played in a career-high 1571 minutes throughout the season… Was a part of the best goals against average in program history (0.33)… Contributed to all of South Carolina’s NCAA-leading 17 shutouts… Had six shots and three on goal throughout the season, including two shots against Jacksonville… Played all 90 minutes against Notre Dame in the Second Round of the NCAA Tournament, the first time in her career she played an entire match… Extended her consecutive starts to 45 at the end of the 2019 season.

2018: Started in all 21 matches… Played in a total of 1497 minutes, all in the outside back position… Helped the Gamecocks lead in the SEC in shutouts (12) and league-leading 0.56 goals against average… Finished with two shots… Played in a season-high 93 minutes against Vanderbilt (10/12)… Played in over 80 minutes five different times during the season.

2017: Saw time in all 23 matches, making nine starts on the Gamecock back line…finished the season with two points on one goal…found the back of the net against High Point (8/27) after converting from the top of the box late in the first half…helped the Gamecocks lead the SEC in shutouts (16) and goals against average 0.469…one of four Carolina freshman to log at least 1,000 playing minutes…two of her three shot attempts were put on target.

PRE-COLLEGE: Served as a team captain while playing for the Concorde Fire of the Elite Clubs National League (ECNL)…competed at the U.S. Soccer National Training Center in 2013, 2015 and 2016…helped lead the Fire to the U-15 Southeast Region Championship…participated in the ECNL Player Development Pool (PDP) in 2014 and 2016…member of the Georgia Olympic Development Program (ODP) in 2010, 2011 and 2013…earned All-Region honors while playing at Northside High School.

PERSONAL: Born Nov. 24, 1998…daughter of Kathryn and Robert Eskew…her mother Kathryn played tennis at DePauw University…listed in the top-five percent academically in each of her four years at Northside… Earned her bachelor’s degree in December of 2020 in public health.

COACH SMITH ON SARAH: “We love Sarah’s style of play as a determined and tough central midfielder who combines her competitiveness with smart composed play. She is similar to players who have played for us in the past and have done very well for our program. She is a player who displays great effort and work rate as well as her strong ability to possess the ball. She will be a tremendous addition.”