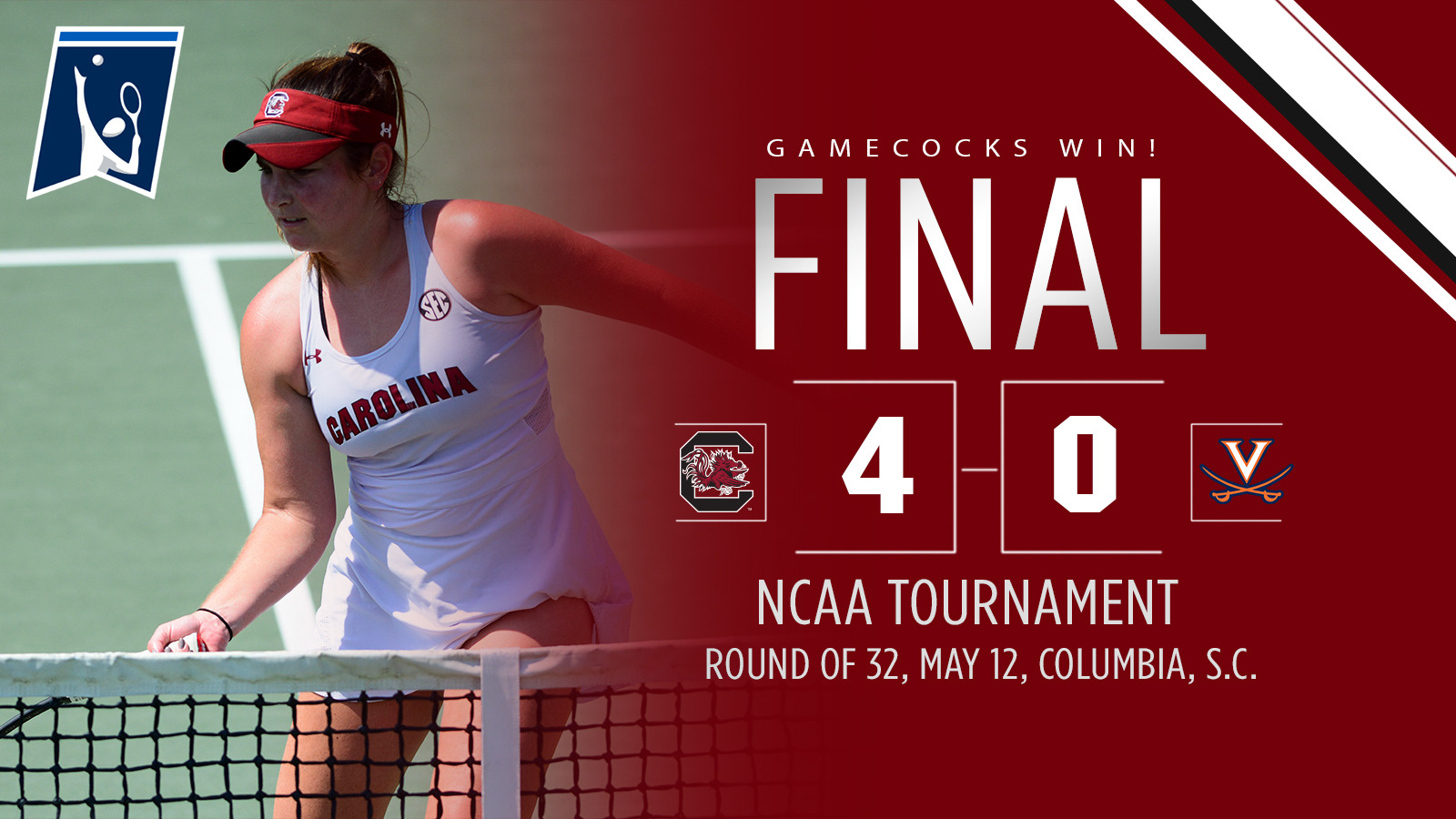 COLUMBIA, S.C. — No. 10 South Carolina women’s tennis (21-6, 11-2 SEC) punched its ticket to the Sweet 16 for the second straight season after sweeping No. 23 Virginia in the second round of the NCAA Tournament on Saturday.

The Gamecocks went 10-0 on a perfect NCAA Tournament weekend at home, without surrendering a match in doubles or singles. Prior to this season and last season, the last time the Gamecocks made back-to-back trips to the NCAA Tournament Sweet 16 was in 1982 and 1983, the first two years of the tournament.

“I feel great,” Head Coach Kevin Epley said. “This is what we want to do. We’ve put ourselves in the position that we’ve been shooting for all year. We wanted to do what we did last year and we wanted to go a little bit further. We like our chances. We like the way we’re playing. I feel like we’re playing a little bit better than this time last year, so we’re real excited.”

For the second straight match, the Gamecocks clinched the doubles without surrendering a match.

Ingrid Gamarra Martins and Mia Horvit defeated the No. 16 doubles tandem in the nation of Rosie Johanson and Meghan Kelley, 6-1. After establishing a 2-1 lead, Gamarra Martins and Horvit won four straight games en route to their win. The win marked the tandem’s and the team’s highest-ranked doubles win of the dual match campaign.

Rachel Rohrabacher and Megan Davies won their match at No. 3 doubles, securing the point for the Gamecocks. The tandem improved to 11-1 on the dual match season with its 6-3 win over Hunter Bleser and Teodora Radosavljevic. Virginia and South Carolina traded games to tie the match, 1-1, but Rohrabacher and Davies extended their lead to 3-1. Bleser and Radosavljevic won two games to narrow South Carolina’s lead to 4-3, but Rohrabacher and Davies won two straight games shortly after to capture their fourth straight doubles win.

Rachel Rohrabacher was the first off the court for the Gamecocks with a 6-2, 6-3 victory over Hunter Bleser at No. 6 singles. The win improved Rohrabacher to 12-1 on the dual match season and marked her 20th overall singles win.

“It’s awesome to Rachel (Rohrabacher) back out there,” Epley said. “We had been missing her for a while, ever since Florida really. She got the appropriate treatment. Her back is feeling a little bit better and getting that second point to win the doubles point and to get that second point on the board, that’s something we had grown accustomed to. It was great to have that happen again. It gave us that cushion for the rest of the matches.”

Paige Cline extended the Gamecocks’ lead to 3-0 with a dominant 6-2, 6-2 victory over Chloe Gullickson on Court 4. The junior improved to 11-2 in dual match play with the win and is 9-1 over her last 10 matches.

“Paige (Cline) was fantastic,” Epley said. “We were a little worried about her. She hadn’t been playing her best maybe, at least as far as she thought. We thought she was fine. She felt like her confidence was shaken a bit. She worked hard this last week. I was watching her. I was about four courts away and she looked great.”

Megan Davies clinched the match for the team, with a 7-6 (7-3), 6-4 victory on Court 5. The freshman improved to 14-4 in the dual match campaign with the win, which was her fifth clincher of the season.

“I went 3-1 up. I knew I had it in me. I knew I could get through the set. It was getting really close,” Davies said of the first set tiebreaker. “I’ve done it before. I’ve stayed in there and toughed it out. I knew if I just kept going every point, then something good was going to come hopefully.”

“UVA was really tough today. They really brought it. They’ve got great doubles. We knew were going to have to bring it doubles. The two ranked teams at No. 1 and No. 2 came out of the blocks fast and hard. That set the tone for the rest of the day. Singles was a battle and it was really hot. Conditions were tough, but we kept fighting and worked through some things. I’m real proud of the team. Great team effort today.” — Head Coach Kevin Epley

The No. 10 Gamecocks will travel to the Wake Forest Tennis Complex for the NCAA Tournament Sweet 16 in Winston-Salem, N.C., to take on No. 7 Georgia at noon Thursday.

For updates, continue to check back with GamecocksOnline.com or follow the team on social media (@GamecockWTennis).