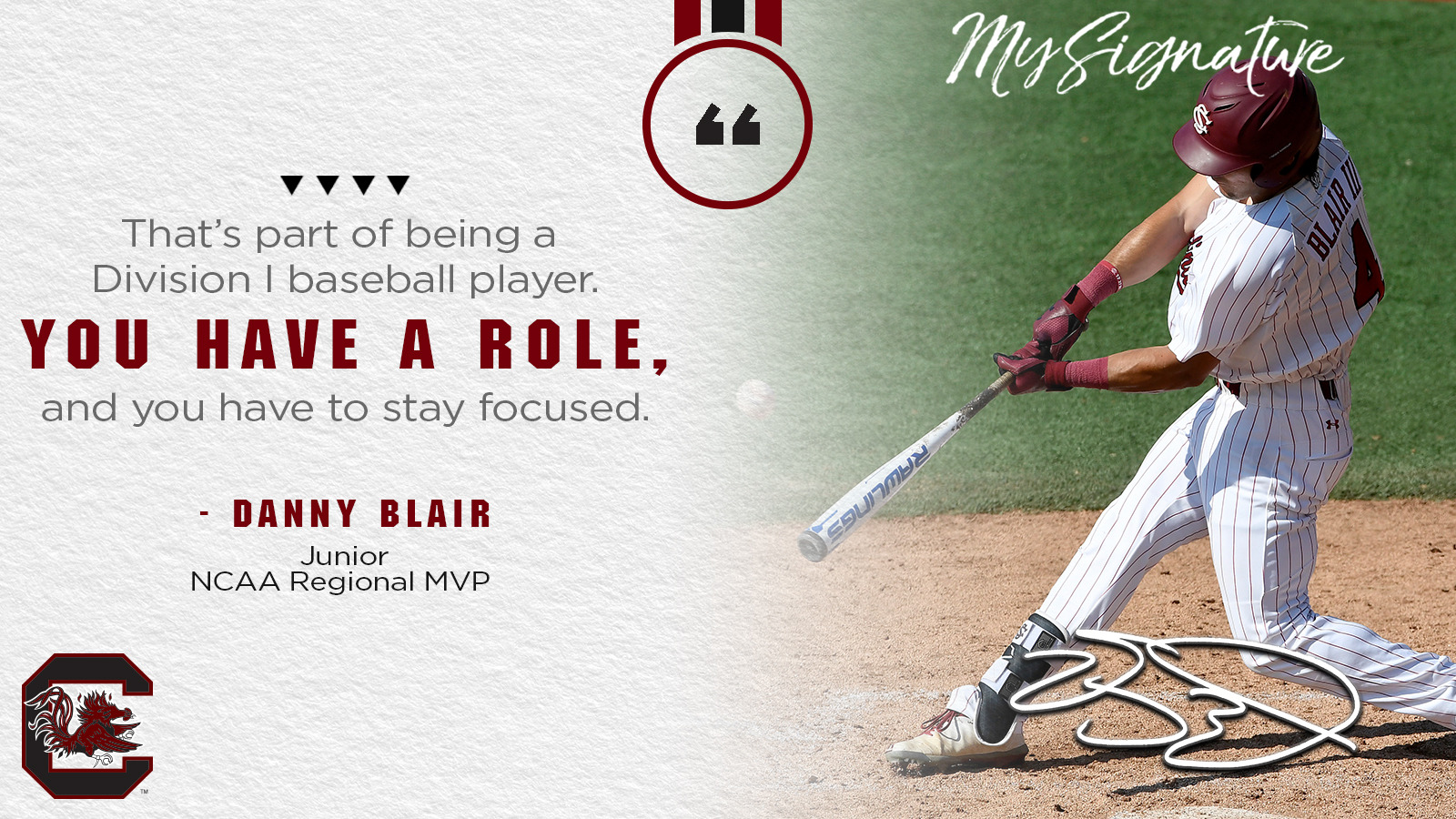 My Signature: Danny Blair Makes the Most of his Opportunity

Danny Blair wasn’t an everyday name in the lineup for South Carolina in the 2018 season, but the junior reserve outfielder from Bel Air, Maryland, inserted himself into program lore at the NCAA Regional. After subbing in as a defensive replacement late in the first-round game against Ohio State, he clubbed a dramatic three run home run in the seventh inning in his first at bat to erase a two-run deficit to help spark the Gamecocks to victory. He would later be named the MVP of the Greenville (N.C.) regional after batting .500 (5-10) with 3 RBI, 4 runs, a walk, a sacrifice, and a stolen base.

“When I stepped up to the plate for my first at bat, I was hoping to get one run in, at least. A base hit would have scored two, most likely, which would have tied it.

“I saw a pitch that was a strike, and that was OK because I was only down a strike. Then he threw me a really good fastball, inside. So, then I was down 0-2. At that point I was thinking ‘let’s just get a run in here and chip away.’

“I battled a little bit and fouled one off and saw another pitch. Then I got a slider, and I put it in the air. At first, I thought it was a sac fly. Then I saw the right fielder drifting back, and it got over the fence!

“I kind of blacked out at that point. I don’t remember what I thought. I turned at second base, and I saw my team and thought ‘Wow! That was pretty big!

“I tend to use my speed a lot and keep the ball low. Gap to gap is OK with me, but I do have power. There’s some in there. I’m glad I was able to hit it.

“There are points in the year when you can get down, and you think maybe you’ll never get a chance to do what you want to do, but you never really lose confidence because everyone at this level is competitive. Everyone wants to play, and everyone wants to win. I’ve always been confident in myself and my abilities, so I knew once I got those opportunities, like I did last weekend, I would be able to come through.

“It’s awesome to do something like that in the postseason here. Coming in as a freshman, you see the murals on the wall. You see Jackie Bradley, Jr., Whit Merrifield, and all those other guys who were able to win the College World Series here and have come through in big situations. So, it means a lot just to be a part of that, and to be somebody that has done something in the postseason.

“Being named MVP of the regional feels amazing. That’s not something I knew they were going to give out. I heard my name over the load speaker, and I was like ‘wow!” Then it hit me a little while later.

“I had some time to reflect on the weekend. My head has been spinning a little bit, getting calls from my family and friends. It’s meant a lot to be able to help this team out in the way that I did. It’s been special for myself and for my team. I’m just happy that our team has been able to get to such a high level.”