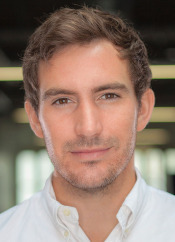 Justin King, a 2010 University of South Carolina graduate, returned to his alma mater as Associate Athletics Director for New and Creative Media in February of 2017.

“We are excited to bring Justin back `home’ to Carolina,” said Tanner at the time of King’s hire. “As we continue to grow the Gamecock brand, Justin’s name rose to the top and his work speaks for itself. I think our fans will enjoy Justin’s work and he will make a great impact in all of our communications efforts.”

At Carolina, King will oversee, develop, create, coordinate and manage the production of graphic and video content used in athletics recruiting. He will also direct and manage the messaging on all of the Gamecock Football social media platforms.

He will also play a key role in the messaging strategy for all USC sports, coordinating with all of the USC Athletics external units.

“I am excited to return back to Carolina,” said King. “There is a lot of positive momentum in Gamecock Athletics and I want to be able to contribute in any way I can to continue to the building process.”

King returns to Carolina after serving as Senior Managing Producer at the Alabama Media Group (AL.com) in Birmingham since 2015, focusing on social media and video production. In his role, he was in charge of art direction, video production, social strategy and story development in the website’s sports coverage. Under his direction, the social audience for AL.com grew from around 20,000 to more than 325,000 people in a year.

Before his stint at AL.com, King was a marketing strategist with Rackspace Hosting (2013-15) and Director of Social Media at Global Evangelism (2011-13). Following graduation at USC, King worked as a Production Assistant at ESPN (2010-11).

King will begin his duties at USC on Feb. 20. King and his wife, Carolyn, have a 3-month old son, Ezra. Carolyn is also a 2010 USC graduate.