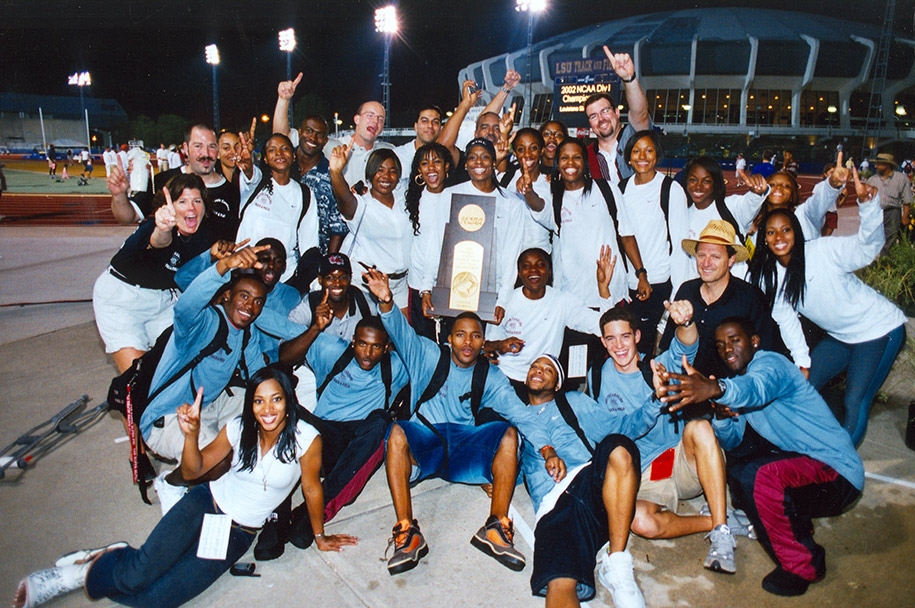 Baton Rouge, LA – Winning the 4x400m relay with an NCAA meet and collegiate record, the University of South Carolina women’s track and field team won the NCAA Outdoor Track and Field title tonight in Baton Rouge. It is the school’s first-ever NCAA title in any event. The school has had two runner-up finishes in baseball, two in indoor women’s track and one in soccer.

On the men’s side, USC’s men finished sixth with 30 points. LSU won the title with 64 points and Tennessee, favored all year, finished second with 57 points.

“I’ve learned a lot from a lot of great people,” said USC Head Coach Curtis Frye. “I stand on the shoudlers of incredible giants in the sport. I think our kids understand what it means to be a class act and win a championship. I knew some things had to happen for UCLA. We didn’t have a lot of things go wrong and we wanted to control our own destiny. We wanted to run our best race of the year in the 4x400m relay and we did. I am just thrilled – I have waited 27 years for this.”

“I’m just as thrilled with the men’s finish. We came here hoping to finish in the top 10 – maybe top five. I am proud of our efforts,” said Frye. “I knew after we won the SEC title in the 4x400m relay, our men would win the race here. All four put it on the line and did an incredible job.”

The women ran a time of 3:26.46 to break its own collegiate and NCAA Championship records in the 4x400m relay. The time is also a school record . The team of Tiffany Ross, Demetria Washington, Tacita

Bassand Lashinda Demus helped USC to a first place finish over Texas. It last won the NCAA title in 2000.

“I can’t put into words how I feel right now,” said Lisa Barber. “Winning the school’s first NCAA title – ever – wow! I am so proud of our entire team. We knew we had a chance if we just worked hard. We are thrilled. I am so proud of the men’s and women’s teams.”

On the men’s side, USC won the final event of the meet, the men’s 4x400m relay with a school record time of 3:02.16. The time is a school record. The relay included James Law, Otukile Lekote, Otis Harris and Jon Fortenberry. Fortenberry, hoping to reverse his luck after dropping the stick in the prelims, wore his uniform backwards and beat LSU and Baylor at the tape.

“I didn’t want to drop the stick again tonight so I wore my uniform backwards. It worked,” said Fortenberry, a freshman from Marietta, Ga.

In the final day of the NCAA Outdoor Track and Field Championships, USC’s quarter runners went 2-3-4 to collect 19 points in the event alone.

One hour later, Aleen Bailey stepped on the track with Barber and picked up 12 points in the 200m, finishing second and fifth respectively. Bailey ran a 22.99 to finish as the runner-up and Barber finished at fifth at 23.29.

“Coach Frye told us before the 200m race that we had to score six points to help the team,” said Bailey. “We scored 12!!! I am so happy to finish second. I know the points helped the team”