Heather Stone didn’t always love running. The South Carolina sophomore cross country runner excelled in other sports growing up, but her unlocked potential was seen by assistant coach for distances Andrew Allden, and Stone is developing into a big contributor for the Gamecocks.

“In high school, a couple of my friends were running cross country, and they told me I should do it to stay in shape for soccer,” said Stone, who is studying retail management and public relations. “I didn’t really like it at first. I did pretty well in my freshman year of high school, so I thought I should stay with it. It started to become fun for me. I liked going on runs.”

A competitive swimmer growing up, Stone later focused more of her energies on soccer and began running cross country as a freshman at Stone Bridge High School in Virginia to stay fit. As time passed, running became a passion.

Fate would intervene. Stone was interested in the University of South Carolina and reached out to Allden. Late in her senior season of high school, Stone was competing at the Nike Regionals in North Carolina, where Allden had already planned to attend.

“It was kind of a fortuitous accident. Right place, right time,” Allden said. “I was there recruiting, but I don’t typically watch what I would describe as the ‘B’ race, which she was in. It’s a championship competition where people qualify for the Nike Nationals. I happened to be watching the ‘B’ race because my daughter, who was a high school runner at the time, was in it. Heather had sent us some information because she was interested in the school, so I said I would watch her run. She ran along at the front, and the course is pretty challenging. Then she casually ran away from everybody and won the race. Her time wasn’t spectacular, but she still looked like she had more in hand.”

“I ended up setting a [personal record] in that last race of my senior year in high school,” Stone said. “I was in the open race, which isn’t as competitive, but I won the race. It was the race of a lifetime. I just felt so great running. That’s how our connection started. It was crazy how it all happened. I think it was a God-thing; like it was meant to be.”

Coach Allden told Stone to take a more serious interest in track during her final season of high school to help her develop and improve her times. In doing so, she found a home with the Gamecocks.

“I’ve been fortuitous in my career that I’ve had a lot of success with what I would describe as multi-sport people coming out of high school,” Allden said. “I like people who are not fulltime runners who maybe haven’t realized their potential coming out of high school, and she’s a text book example of that. She has made some ridiculous improvements last fall, and she followed that up with what she has done on the track as well.”

“Some people crave to lift weights, or play golf, or read a book. I crave to run.”
– Heather Stone


Stone hasn’t disappointed since donning the Garnet and Black. She was South Carolina’s top freshman finisher in each of her last five races last year and took ninth overall at the Carolina Challenge to help the Gamecocks win the team title. She got her sophomore year off to a good start last month by finishing third overall at the 2018 Carolina Challenge. The early success helped validate her decision to stick with running and what the coaching staff saw with her potential. 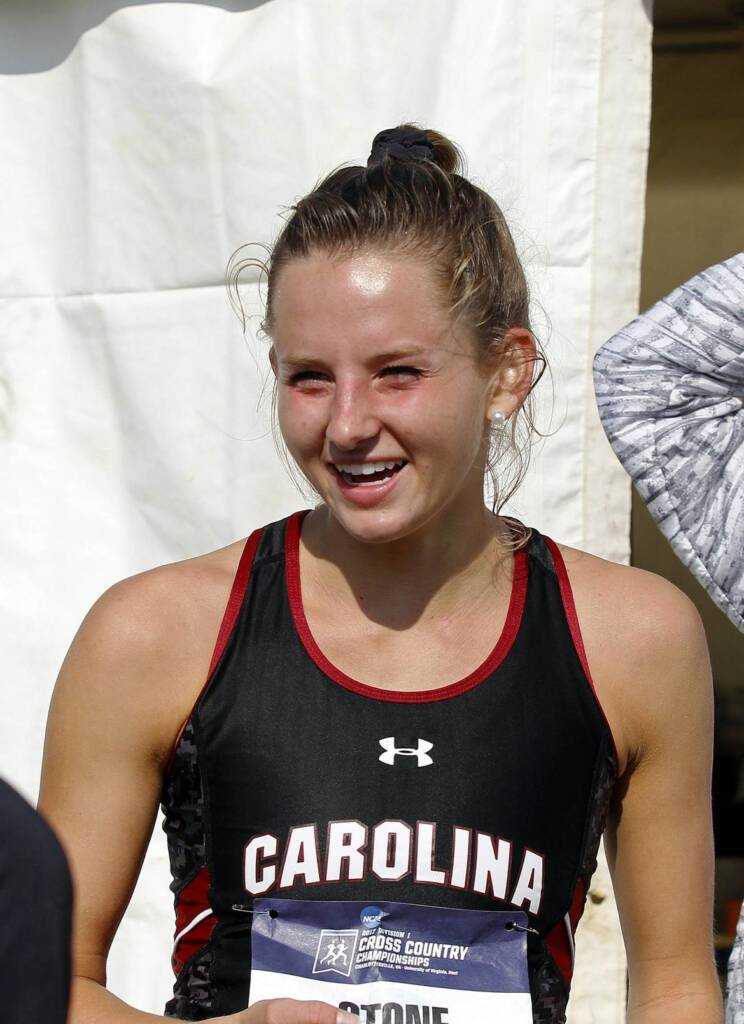 “Coming in, I was very nervous that I wouldn’t fit in running-wise,” Stone said. “Being able to score for the team is very validating. It’s great to know that I can run at this level, and I can run here. Now, I want to p.r. in the 6K and do better than I did in the last race. I want to finish higher in the SEC meet this year as well.

“The experience I have of running with my teammates at practice every day has made me better. At the end of high school, I was pretty-much running alone. My senior year, I had to run with the boys. Having so much support here is huge. Racing in college is so much different than it was in high school. I definitely like it a lot better.”

To some people, distance running is a punishment. Stone noted that the joy of running is no different than everyone else’s individual passion.

“I think part of it is the satisfaction that your body can do these things,” Stone said.  “Some people crave to lift weights, or play golf, or read a book. I crave to run.“

While Stone continues to work on improving her 5K and 6K times, she would also like to challenge herself by competing in a triathlon someday.

“I want to do an Iron Man because I swam from the time I was eight years old until I was a freshman in high school,” Stone said. “I got sort of burned out from getting up at four in the morning, but I quit swimming when I started playing travel soccer because I couldn’t do both. I don’t have any biking experience though.”

In addition to being fit physically, a positive mental state is a key for Stone when running.

“If I’m positive, I have much better practices,” Stone said. “If I go into it thinking I just want to get it over with, then it ends up worse.

“When I’m in a race, halfway through it, I don’t remember much. I sort of go blank. At the beginning, I have a habit of getting out way too fast. I’m focusing on people in front of me, and thinking that’s who I should be running with, so I push forward. Finishing a race is great. You can be overwhelmed and you’re so tired. You can’t feel your legs, or you can, and they hurt so bad. But it’s also so exciting, especially when you reach a time that you really wanted.”