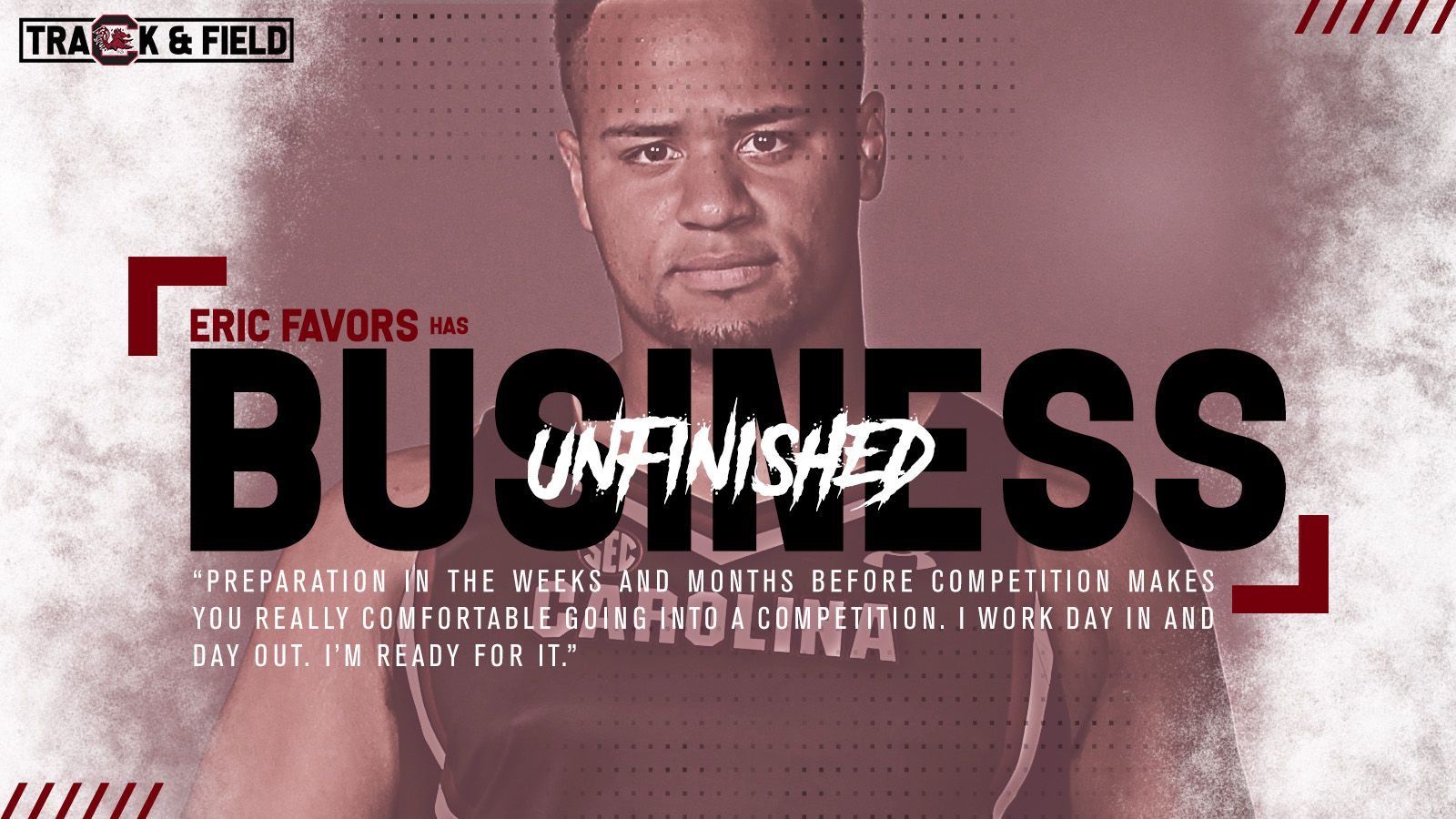 Unfinished Business: Eric Favors is Ready to Take the Next Step

Eric Favors is ready to take the next step. After qualifying for the NCAA Outdoor Regional in each of the last two years, South Carolina track and field’s redshirt junior in the throw events has unfinished business and is hard at work to reach the NCAA Championships next spring.

“I’ll take it one meet at a time,” Favors said. “I’m not putting a lot of pressure on myself. I take everything as a learning experience. I’ve gotten better each year here, and that’s the process I want to go with. I’m just going to keep trying to make progress and get better.

“Preparation in the weeks and months before competition makes you really comfortable going into a competition. I work day in and day out. I’m ready for it.”

Favors started throwing when he was in the eighth grade after watching his older brother compete at their high school. Although football was the first sport at which he excelled, Favors soon found a passion for track and field and the throw events.

“Throwing was just something to do outside of football at first,” Favors said. “Then I started getting good at it. It was fun. I had a bunch of people to train with, who were all good friends that I grew up with. We just kept getting better, and now I’m here!”

After redshirting his first year at South Carolina, the Pomona, N.Y., native and criminal justice major made an impact the following spring, earning three indoor podium finishes in the shot put, including a fifth-place mark at the SEC Indoor Championships where he took home 2017 Indoor SEC All-Freshman Team honors. His mark of 18.45 meters at SECs ended the season as the top mark of the indoor season by a collegiate freshman. He went on to earn three podium finishes during the outdoor season and was an NCAA East Regional qualifier.

“I’d like to make my own path and name for myself.”
– Eric  Favors


Favors followed that up last spring with two shot put podium finishes in the indoor season, and continued to excel in the outdoor season, which included a personal record 18.73-meter effort at the Weems Baskin Invitational, ranking him sixth in program history. He would go on to qualify for the NCAA East Regional for the second straight year.

“To get to nationals this year, I have to be more technically sound with my technique and be comfortable with it,” Favors said. “I’m still relatively new to the rotational technique.”

Competing in the SEC allows Favors to match his talents against the best in the country. Having the ability to train alongside former teammate Josh Awotunde, who graduated last spring after earning first team All-American honors and finishing second at the NCAA National Championships, also helped in his preparations.

“He had an awesome career and just having him show me everything it takes, that’s really helpful,” Favors said. “I’d say that seeing him every day makes it easy to not be intimidated (in competitions). He threw really far and was one of the best. Seeing him do it made me realize I can do the same things. It gave me the confidence to compete with anyone in the country.

“I’m not going to say I’ll be filling [Awotunde’s] shoes. I’d like to make my own path and name for myself.”

Favors credits his coaches, including assistant coach Mike Sergent, with helping him improve his skills.

“I came here as a really strong kid who wasn’t technically sound,” Favors said. “Coach [Sergent] worked with me on that and in being more controlled with my throwing. It has helped me a lot.”

Favors continued to hone his skills while competing at the Irish Senior Championships this summer in Dublin, after applying for dual citizenship in Ireland and the United States, thanks to his Irish grandmother. He finished second in the shot put in Dublin with a mark of 16.45 meters, and he took third in the discus with an effort of 50.26 meters.

Now that he has had a taste of international competition, Favors is focused on taking the next step to not only reach the NCAA Championships, but to also stand on the podium at the end of the competition.

“That would be amazing,” Favors said. “I’ve worked a lot of years for this. I definitely feel like I’m physically capable. I’m ready.”