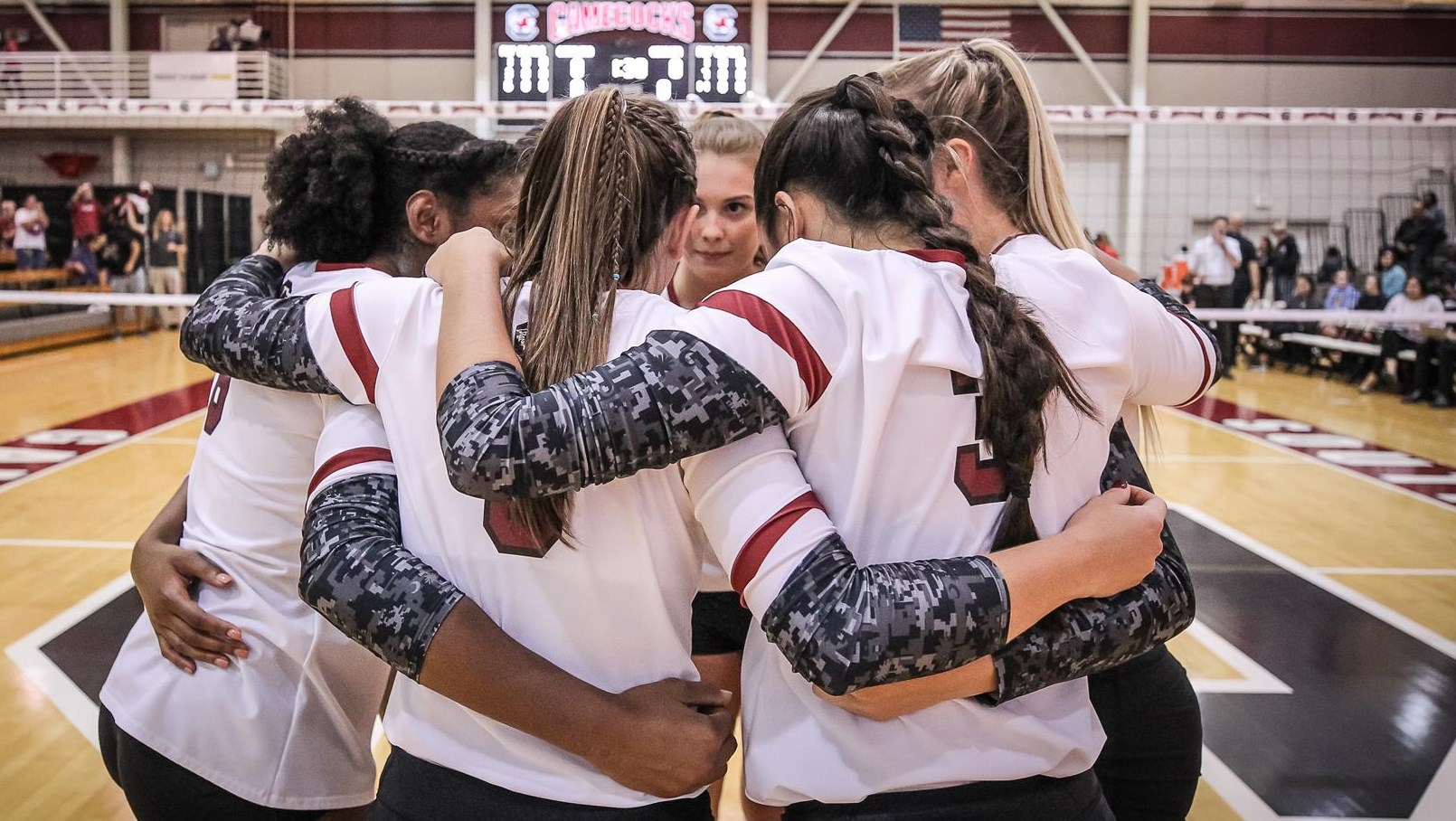 The rivals square off in Knoxville Wednesday night on ESPNU

KNOXVILLE, TENN. – The South Carolina volleyball team kicks off a crucial week of SEC play Wednesday night with a match at Tennessee (16-5, 7-2 SEC). The Gamecocks will face the Volunteers on ESPNU for a 7 p.m. first serve. It begins a road trip that culminates with a Sunday afternoon match against the SEC-leading Kentucky Wildcats.

GAMECOCKS REMAIN IN RPI TOP 30
South Carolina checked in at No. 29 in the fourth RPI ranking of the season, released by the NCAA on Monday afternoon. South Carolina ended the 2017 season ranked 156th in the RPI standings.

SCOUTING TENNESSEE
The Volunteers 2018 season mirrors South Carolina’s in a number of ways. The team returned most of its leaders from 2017’s 12-15 campaign, but under new head coach Eve Rackham and a few newcomers there has been a culture change on Rocky Top. Tennessee enters Wednesday receiving votes in the AVCA coaches poll with a 16-5 overall record and a 7-2 mark in SEC play, thanks to the number two offense in the conference and a top-five defense. Tessa Grubbs leads the offense with 3.83 kills per set, and is back to 100 percent after missing four matches with a concussion. Middle hitter Erica Treiber is one of the top offensive middles in the conference, averaging 2.80 kills with a .384 hitting percentage this season, but fellow middle Addisyn Rowe – a transfer from Marshall – has been equally impressive, with a .320 hitting percentage. Freshmen have also been a key to the turnaround, as pins Lily Felts and Raquel Perinar pitch in 4.71 kills per set from the outside. Defensively, the team ranks fifth in the SEC with 2.22 blocks per set and third in digs per set (14.95).

LAST TIME VS. THE VOLUNTEERS…
The Gamecocks set a season high for kills in a 3-1 win at Tennessee on Nov. 3, 2017, snapping a three-game losing streak for Carolina. Mikayla Shields hit .419 with 23 kills, and three other Gamecocks hit double digits for kills as the team compiled 69 with a combined hitting percentage of .321. Shields also pitched in 19 digs, helping the Gamecocks total 70 for the four-set win.

SCOUTING NO. 14 KENTUCKY
The Wildcats are the last unbeaten team in SEC play, entering the week at 8-0 with a 14-4 overall record and the number 14 ranking in the latest AVCA Top-25 coaches poll. Kentucky owns the number-one offense in the conference, and ranks fifth nationally with a .296 hitting percentage as a team. Reigning SEC setter of the week Madison Lilley guides the offense, and the sophomore is second in the SEC with 10.88 assists per set. She has one of the best left-side hitters at her disposal with junior Leah Edmond. The returning All-American comes into the week with an average of 4.46 kills per set and a .301 hitting percentage. Defensively, the Wildcats had to replace two middles (Kaz Brown and Emily Franklin) who accounted for over 90 percent of their total blocks from 2017 and one of the nation’s top liberos in Ashley Dusek (4.44 digs/set). Gabby Curry has stepped into the libero role and averages 4.07 digs per set, and new starting middles Kendyl Paris and Brooke Morgan have combined for 1.77 blocks.

LAST TIME VS. THE WILDCATS…
South Carolina was able to take a set off No. 6 Kentucky back on Nov. 5, 2017, but dropped a 3-1 road decision. Five Gamecock hitters finished with eight or more kills, but the defense couldn’t slow down one of the nation’s best offenses. South Carolina wasn’t able to score points off serve or on the block, getting just one ace and six blocks compared to eight aces and 10 blocks for Kentucky. Leah Edmond led the Wildcats with 19 kills and a .351 hitting percentage.

AUBREY ACE-ZELL
Senior libero Aubrey Ezell has at least three aces in 10 of the team’s 19 matches, and ranks third in the program’s all-time history for her career with 190. She currently leads the SEC and ranks second nationally with 0.77 aces/set, and is the NCAA’s active career leader. Her 53 aces this season are a career high, and are tied for the most by any Gamecock since Megan Hosp in 2002. The last Gamecock with more than 53 aces in a season was Plummer’s total of 86 in 1998, coming in the sideout-scoring era.

Among SEC rivals, only three other individuals have reached 50 aces in a single season over the last decade. Only Carli Snyder (57, 2017) and Evie Grace Singleton (54, 2016) have more than Ezell’s current total. For her career, Ezell has three of the top 10 single-season totals in the SEC over the last 10 seasons.

MENDOZA ENJOYING STRONG 1ST SEASON AT SC
Tom Mendoza became the 13th head coach in Gamecock volleyball’s 46-year history on Jan. 3, 2018. Mendoza spent 2016 and 2017 as head coach at High Point University, where he led the Panthers to back-to-back NCAA tournament appearances. In 2017, the Panthers were in rare company as a mid-major program earning an at-large bid to the NCAA tournament. In the postseason, Mendoza was named the Big South’s and AVCA Southeast Region’s Coach of the Year. Already this season, South Carolina has surpassed its overall, SEC, and home win total from 2017.

KOEHLER SETTING HER SIGHTS ON SC RECORDS
Junior Courtney Koehler has guided the team’s offense as its lone setter for the past two seasons, and her production has her leaping up the program’s record book. The Asheville, N.C. native moved into the program’s all-time top 10 for career assists this season and she currently sits seventh overall in Carolina’s 46-year history and second among setters in the rally-scoring era (since 2001). Koehler’s 2017 total of 1,123 assists put her third in for most in the era, and she currently ranks fourth in the SEC with 9.77 assists per set this season.

MCLEAN, VASTINE REMEDY LEFT SIDE ATTACK
Junior Britt McLean arrived in Columbia this summer after two seasons with Minnesota, and sophomore Jess Vastine saw considerable playing time as a freshman at Carolina, but was relegated to a largely back-row role. The duo has already given a facelift to one of South Carolina’s weaknesses in 2017 – consistent offensive numbers from the left-side attack. McLean and Vastine’s combined numbers (4.65 kills per set, .213 hitting percentage, .367 kill percentage) compare favorably to the combined numbers of the Gamecocks’ four main left-side hitters from 2017 (5.54 k/s, .153 hitting percentage, .308 kill percentage).

IRON WOMAN
Aubrey Ezell is on an impressive streak for the Gamecocks. The senior has not missed a single set in her career, entering Wednesday on a stretch of 110 matches played. Currently, her 405 total sets ranks 8th in the rally-scoring era and 110 matches rank 10th, but no other player has played as many consecutively.

SHIELD BEARER
Last season, Mikayla Shields became the third sophomore in the program’s 46-year history to make it to 700 career kills. In the Sept. 23 win vs. LSU, Shields moved past 900 career kills, making her the seventh Gamecock in program history to reach 900 as a junior (despite having nine matches left to play). Now needing just 11 more kills to reach the coveted milestone of 1,000, Shields would become the first Gamecock to reach 1,000 kills since Juliette Thevenin in 2012, and the fourth-fastest to reach the milestone in program history.

DOUBLE-DOUBLE THE TROUBLE
After going for 11 kills and 13 digs against Florida on Oct. 12, Mikayla Shields moved past Kelly Morrow (1993-96) and up to 17th in program history for career double-doubles. Teammate Aubrey Ezell ranks 15th on the career list with 22 – only six Gamecocks total have gone over 20 career double-doubles in the last 15 years.

ROBINSON TALLIES 2ND SEC HONOR FOR 2018
Sophomore Mikayla Robinson earned her second Defensive Player of the Week honor of the season on Monday, Oct. 1, after the middle blocker averaged 2.12 blocks and 2.50 kills per set in wins at Alabama and at Georgia. She is the first Gamecock since Paige Wheeler in 2011 to earn defensive honors twice in a single season. Robinson leads the team with 1.01 blocks per set and a .298 hitting percentage.

HOME-COURT ADVANTAGE
The Gamecocks have made the Carolina Volleyball Center one of the toughest venues in the country over the last three seasons. Of the program’s top ten crowds all time in the CVC, nine have come in the last three years and three of the top five have come this season, including a program-record crowd of 3,458 at the Clemson match on Aug. 25. This season, the Gamecocks rank 24th nationally for cumulative and average attendance and are 8-1 in the CVC.