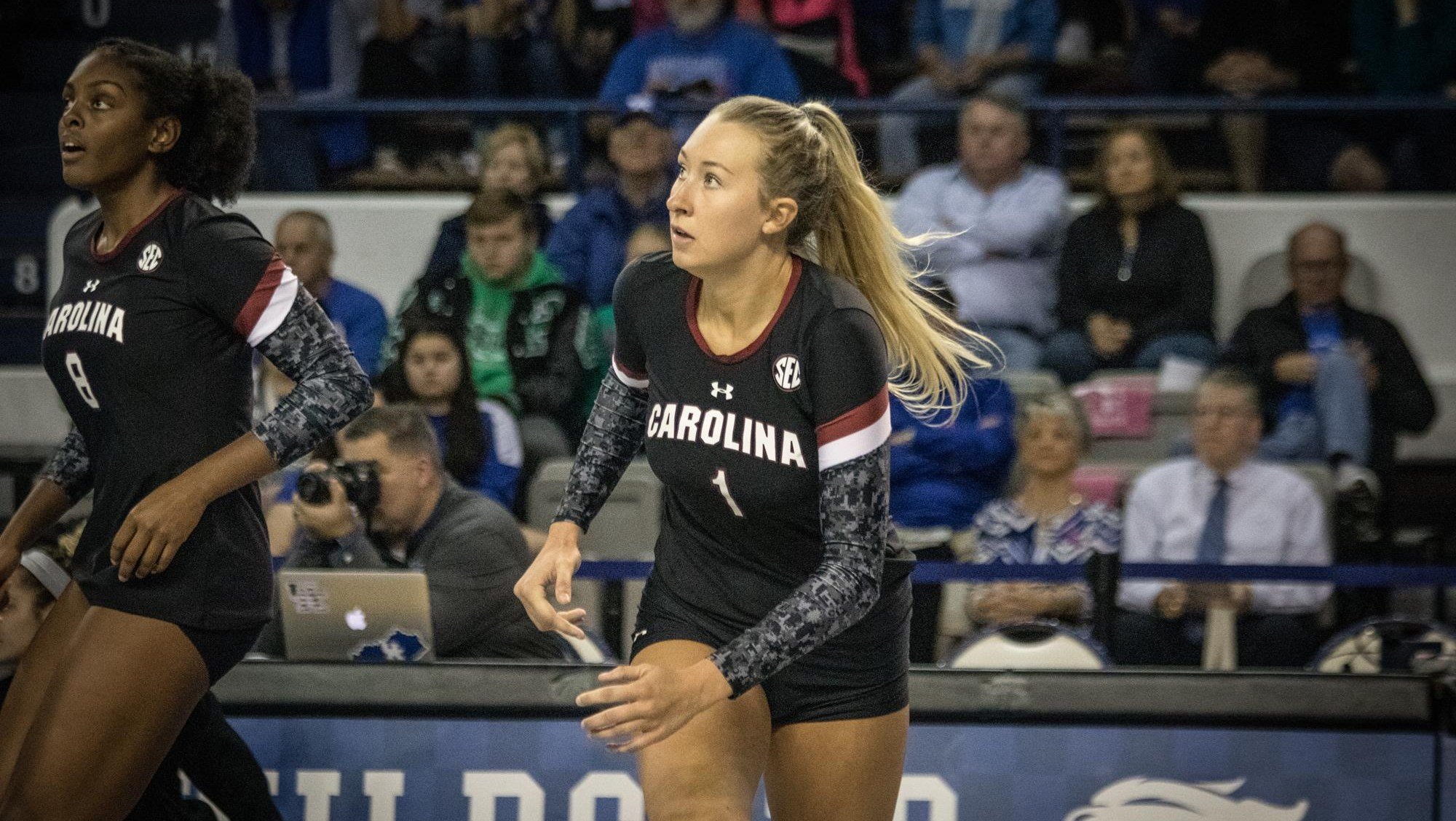 South Carolina Loses at No. 14 Kentucky

LEXINGTON, KY. – South Carolina lost a 3-0 decision at No. 14 Kentucky Sunday afternoon. The SEC-leading Wildcats held the Gamecock offense to its lowest hitting percentage of the season to run its record to 16-4 and 10-0 in SEC play. South Carolina now stands at 15-6 with a 6-5 conference mark.

SET 1: The Gamecock offense finished with a negative hitting percentage thanks to five total blocks from the home side, and dropped the opening set 25-18. The Gamecocks weathered a 5-0 run to start the set from Kentucky, pulling back to 14-all before the Wildcats used an 8-0 run to pull away for good. Claire Edwards led the offense with four kills, but the rest of the team would combine for just three kills and nine attack errors on 29 swings.

SET 2: The Wildcat defense would be stingy again in the second, keeping the Gamecocks to just seven kills in a 25-12 victory to go up 2-0. After being held in check in the opening game, the Kentucky offense responded with a .300 hitting percentage and just three total attack errors. Aubrey Ezell helped the back line of South Carolina’s defense with eight digs.

SET 3: The Gamecocks found success early in the set, opening with a 7-3 lead thanks to a pair of kills from Courtney Furlong. After reaching just seven kills in each of the opening two games, the offense was able to match that total by its 12thpoint in set three, and forced the Wildcats into a timeout after extending out to a 12-7 advantage. Outside of its improved kill total, the Gamecocks also went without an attacking error until its 14thswing of the game, but Kentucky’s offense would keep pace and pulled even at 14 to force the Gamecocks into a timeout to regroup. South Carolina jumped back ahead 18-16, but Kentucky put up a 5-0 run from there that gave it back the lead for good in a 25-23 decision to close out the match.

STAT OF THE MATCH: Kentucky’s 11.5 total blocks over the three sets keyed a defense that held South Carolina to a .101 team hitting percentage Sunday, its lowest of the season. The Wildcat block total was the second-highest for a three-set match by any South Carolina opponent so far this season, behind only Alabama’s 12 back on Sept. 28.

UP NEXT: The Gamecocks return to Columbia for a full weekend at home. The team will take on another top-25 opponent when Missouri comes to the Carolina Volleyball Center on Friday night at 7 p.m., then Auburn will square off with the Gamecocks on Sunday at 1:30.