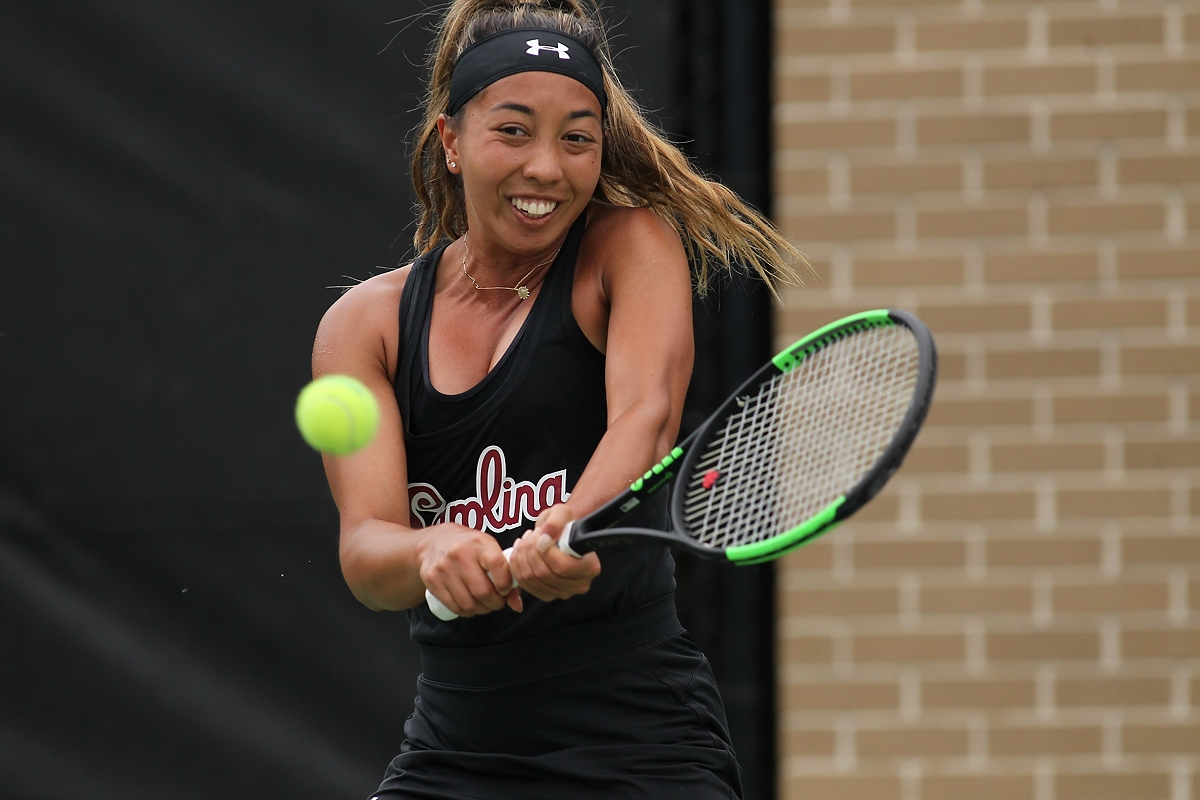 COLUMBIA, S.C. – South Carolina junior Mia Horvit clinched the Gamecocks’ first-round victory, 4-0, on Friday afternoon at the Carolina Tennis Center, advancing Carolina to the second round of competition in the NCAA Championships.

Plagued with a four-hour rain delay only 25 minutes in to singles, the Gamecocks (21-3, 12-1 SEC) were looking to get the match finished against North Florida (17-8, 6-1 ASUN). Speeding through singles, Horvit got a two-set win, for Carolina’s 10th 4-0 victory of the season.

In the first set, No. 81 Horvit and Ana Paula Melilo played tight, going back and forth on court three. Up, 5-3, Horvit looked like she was about to take the match, but Melilo came back, bringing it within one, 5-4. Powering through her last game, Horvit won the first set, 6-4. Horvit found her groove in the second set, claiming it, 6-1, and clinching the overall match for Carolina, 4-0.

“North Florida played very well,” head coach Kevin Epley said. “They fought hard. They have a really good team. It was nice to get pushed a little bit (Friday). UVA had a tough match early and they looked pretty good so we needed to get some good points under our belt and North Florida was up to the challenge. Even after the rain delay they came out and were still fighting hard.”

Getting back in the swing of doubles, No. 3-ranked Ingrid Martins and Horvit did not allow Rafaela Gomez and Constanza Gorches a single game, taking the first set, 6-0, at the No. 1 position.

On court two, No. 39 Megan Davies and Rachel Rohrabacher teamed back up for the first time since February and did not miss a beat. The two defeated Lucia Montano and Florencia Rossi, 6-1, taking the doubles point for the Gamecocks.

Four hours after the last point played, the Gamecocks got right back into action. No. 17 Paige Cline held a, 5-0, lead in her first set against Montano prior to the delay. Coming back out ready to play, Cline won the first set, 6-0, at the No. 2 spot. In the second set, Cline went up, 5-0, again, ultimately claiming her match, 6-0, 6-1, and giving South Carolina the, 2-0, advantage.

At the No. 6 position, Kennedy Wicker cruised to a quick, 6-1, first-set victory against Sean Lodzki. In the second set, Wicker won every single game, taking her match, 6-1, 6-0, and getting the Gamecocks one point closer to the victory.

“We’re going to have to work on a few things and play a little better tennis to be competitive (Saturday),” Epley said. “Overall, we’re happy with the results (Friday).”

Up next, the Gamecocks take on No. 21 Virginia at 9:30 a.m. ET on Saturday at the Carolina Tennis Center for the right to go to the Sweet 16.

Live video and live stats are available for the match. Both links can be found on the tournament landing page and the women’s tennis schedule page on gamecocksonline.com.