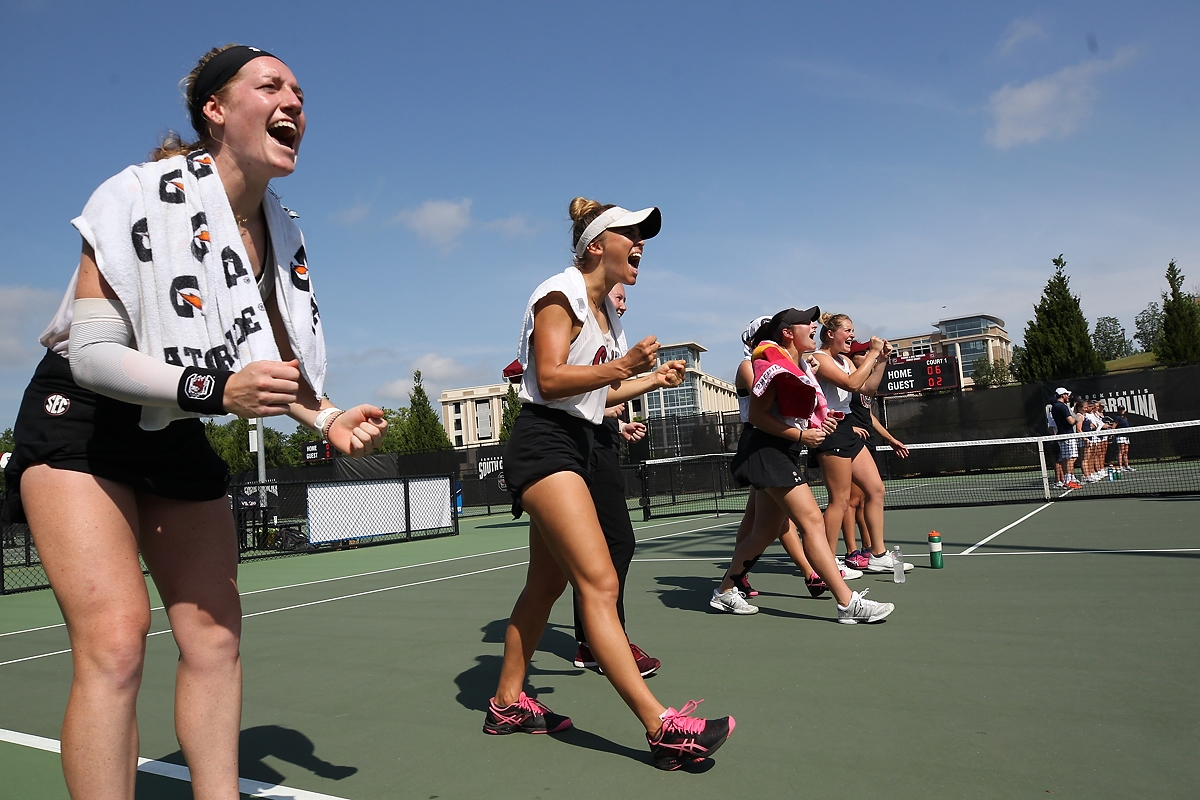 No. 4 Carolina Heads to Third-Straight Sweet 16

COLUMBIA, S.C. – South Carolina senior Paige Cline rallied for a three-set victory, clinching Carolina’s victory over Virginia, 4-1, on Saturday afternoon at the Carolina Tennis Center, advancing the Gamecocks to the Sweet 16 of the NCAA Championships.

With their win over No. 21 Virginia (18-9, 8-6 ACC), the No. 4-ranked Gamecocks are headed to their third-straight Sweet 16. Holding a, 3-1, lead with the final three matches playing third sets, No. 17 Cline was cruising in her final set. In the first set against Vivian Glozman, Cline took it quickly at the No. 2 spot, 6-2. Cline went up, 4-0, in her second set, but Glozman was not backing down and claimed six games in-a-row, winning the set, 6-4. In the match-deciding set, Cline only allowed Glozman one game, downing the Cavalier in three sets, 6-2, 4-6, 6-1, and clinching the overall for Carolina, 4-1.

“We have this saying that three-quarters of the way into a match we really turn on the gas,” head coach Kevin Epley said. “A lot of the time, Paige Cline has been that person we’ve had to rely on in that situation. They pushed us to the limit. Credit to UVA; they really, really brought it (Saturday). They played us as tough as anybody in the country.”

In what started out as quick doubles play, Carolina and Virginia split the first two matches on courts two and three. At the No. 2 spot, No. 39 Megan Davies and Rachel Rohrabacher got a win against No. 90 Glozman and Sofia Munera, 6-2.

Returning the favor, UVA’s pair of Meghan Kelley and Hunter Bleser topped Cline and Kennedy Wicker, 6-2, at the No. 3 position

Playing a marathon doubles match that lasted one hour and 37 minutes, all eyes were on court one. Trading almost every single point of the match, No. 3-ranked Ingrid Martins and Mia Horvit were battling with No. 50 Amber O’Dell and Chloe Gullickson. The Gamecocks fell behind twice at the end, 5-4, and, 6-5. Coming back to tie it both times, the teams headed to a tiebreaker. With the doubles point on the line, Horvit and Martins cranked through the tiebreaker, taking the match, 7-6 (2), and putting their team up, 1-0.

In singles, Silvia Chinellato was not able to find her groove against Munera, falling at the No. 5 position, 6-1, 6-3, bringing the overall score to a tie, 1-1.

Looking for the final win, Cline showed her dominance at the No. 2 position and topped Glozman, 6-2, 4-6, 6-1, clinching the overall match for South Carolina.

Up next, the Gamecocks host the Sweet 16 next weekend at the Carolina Tennis Center against an opponent to be determined.