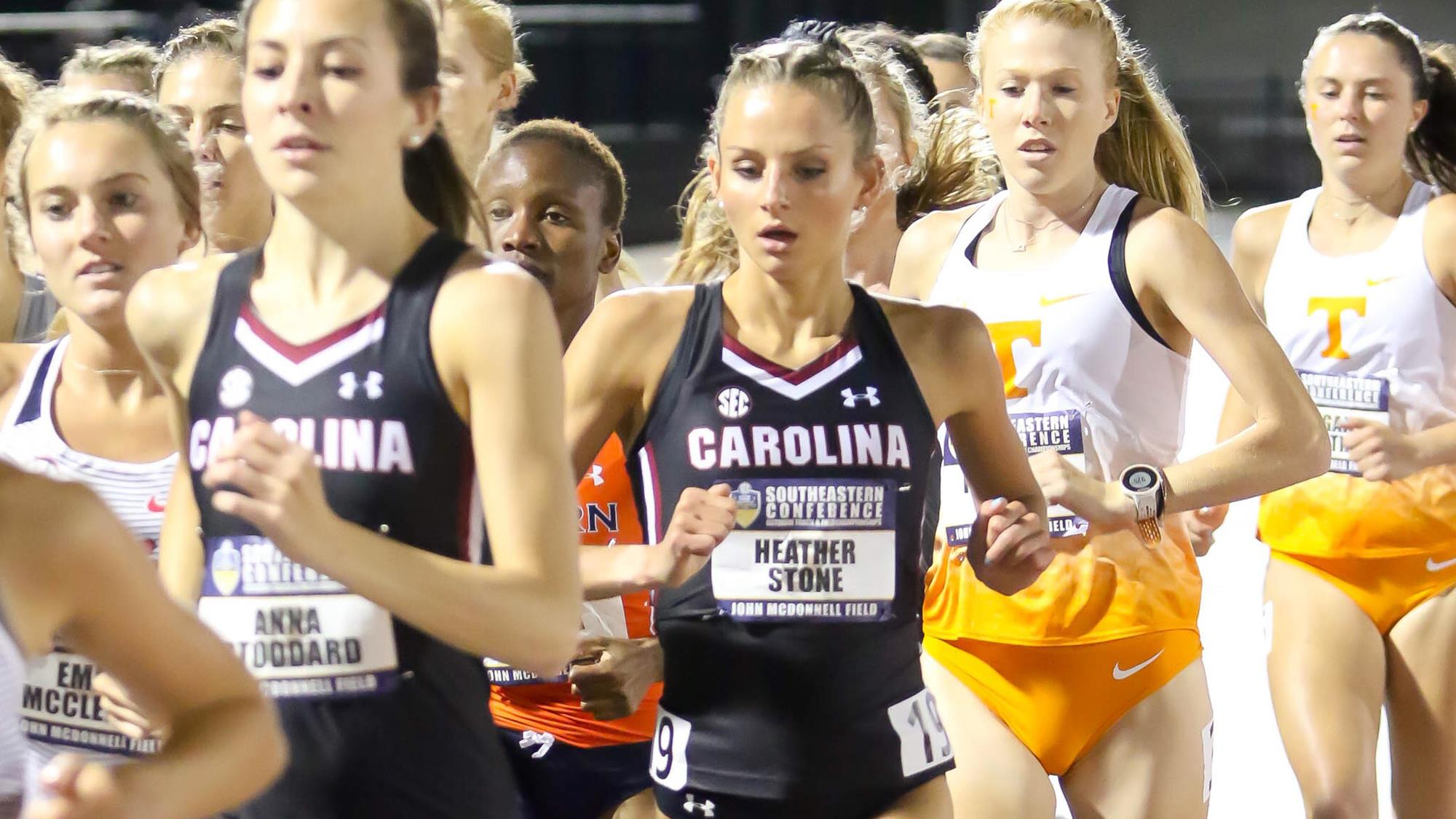 Stone came up with Carolina’s first SEC scoring effort in the women’s 10000m since 2000, while Jones ran his sharpest race of the 2019 season on Thursday, shaking off the cold to qualify for his fourth-career men’s 800m conference final. The Gamecocks also posted strong efforts in the multi events on Thursday, setting the stage for a successful weekend at John McDonnell Field.

Through one day of action, Mississippi State leads the men’s competition with 24 points, while Auburn leads the women’s meet with 16 points. The Gamecocks rank seventh on the women’s leaderboard with five points, and the vast majority of action is still to come, with 18 of 21 men’s events and 19 of 21 women’s events left on the schedule.

The women’s 10000m final was the last event of the day, and it provided Carolina with one more distance highlight in a season full of them. Stone finished fourth, the best finish by a Gamecock in the event since Tanya Povey won the SEC title in 1998 and the first scoring result by any Carolina athlete in the women’s 10K since 2000. Her time of 34:20.22 ranks second in Carolina history and 21st on the 2019 NCAA East Regional leaderboard. It’s also the 55th-best time in the nation this season. Anna Kathryn Stoddard completed the race in 35:26.16, the fifth-best time in program history.

“It’s really exciting; I’ve had this goal throughout the season, thinking how incredible it would be to score at SECs,” Stone said. “Being my first time here, I didn’t know how it was going to feel, how it was going to go, but knowing the result is historic, it’s very exciting.”

The Gamecocks opened the evening session with the men’s 800m, where Jones used his experience to post a season-best run and qualify for Championship Saturday. The Sumter, S.C., native ran at the front of the pack throughout the fastest heat and clocked a time of 1:49.19. That was the fourth-best mark of the evening and also ranks 25th on the NCAA East Regional leaderboard. The 2018 SEC bronze medalist in the event, Jones runs for a conference title Saturday at 6:45 pm CT.

In the 400m hurdles, Rivaldo Leacock ran the best race of his collegiate career despite the chilly conditions. The sophomore stopped the clock in 51.45, good for 11th place on Thursday. That time moves Leacock up to 21st on the East leaderboard, all but assuring him a place at the NCAA qualifying meet in two weeks.

Senior Carson Strom ran his final collegiate 10000m on Thursday night and came in 16th place. The Greenwood, S.C., native finished just off his personal-best pace from two weeks ago at Penn Relays, recording a time of 31:19.91.

The meet started for South Carolina on Thursday afternoon with two Gamecocks beginning their multi event journeys. Mathilde Coquillaud-Salomon is halfway home in her first-career collegiate heptathlon, and the freshman holds ninth place with three events left in a tightly-bunched competition. Coquillaud-Salomon opened the day with a season-best 13.96 in the 100m hurdles, and she currently has 3,063 points.

In the decathlon, Benjamin Womble sits in a scoring position after Thursday’s action. The sophomore is currently eighth place with five events left after scoring 3,126 points. His best event of the day was the 100m, where his time of 11.32 netted 791 points.

“Otis is always a championship guy. He’s made the championship finals in every meet the last two years, and we’re really excited about him getting a shot to score points for the Gamecocks. That was a big one there, and then Ben did a good job today in the decathlon, and Mathilde had a good mark in the heptathlon.”