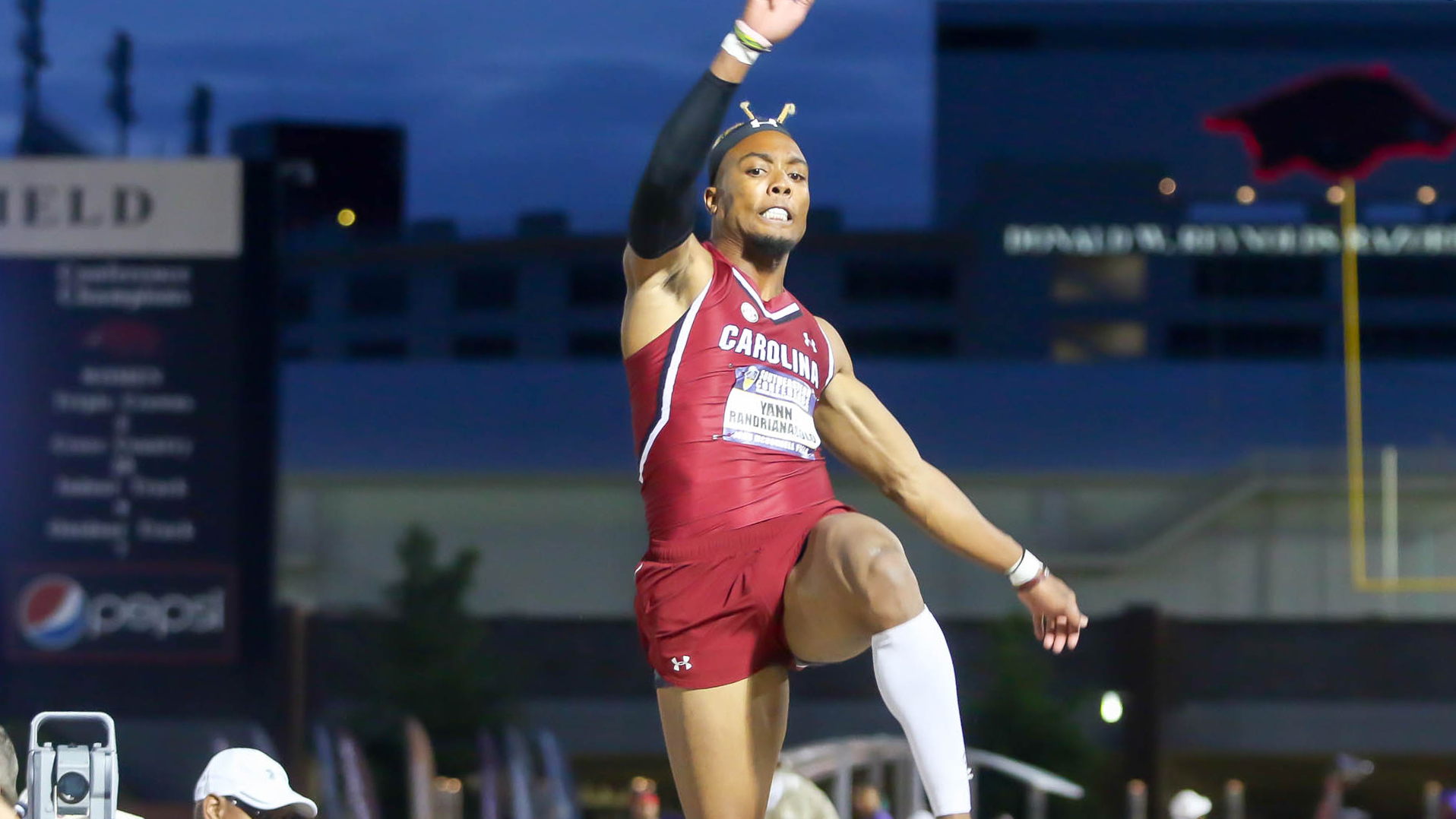 FAYETTEVILLE, Ark. — It was another banner night for the University of South Carolina track & field team as the 2019 SEC Outdoor Championships continued at John McDonnell Field. Eric Favors and Yann Randrianasolo each collected podium finishes in the field, while Mathilde Coquillaud-Salomon and Benjamin Womble added scoring efforts in the multi events on the second day of the conference meet.

Favors (men’s shot put) earned his first-career SEC podium spot, and Randrianasolo (men’s long jump) left the conference meet with hardware for the second time. Coquillaud-Salomon scored in the heptathlon, Womble posted a scoring effort in the decathlon, and five Gamecocks advanced out of preliminaries into Saturday’s finals session.

Through two days, Auburn tops the women’s competition with 41 points, and Florida has moved into the men’s lead with 37 points. The Gamecocks rank 13th in the women’s race, with six points, and 12th on the men’s side, with 13 points. Saturday’s action included 13 of the 21 finals for both the men and the women.

Favors rocketed up the men’s shot put leaderboard with his third attempt, an outdoor personal best that measured in at 18.87m (61-11). The Pomona, N.Y., native added throws of 18.81m and 18.66m as part of a strong series, and his top throw was good for a bronze medal and six points.

It’s the first-career SEC medal for Favors, and he’s now up to 14th on the NCAA East Regional leaderboard. Senior Ben Bonhurst also threw a season best on Friday, moving up to 28th in the region with an effort of 17.85m (58-6 ¾).

The podium finish for Favors is the fourth by a Gamecock in the men’s shot put in the last three SEC outdoor meets. Josh Awotunde took second and Bonhurst finished third in 2017, while Awotunde added another silver last season. Now Favors has his first-career SEC medal to add to his collection.

Randrianasolo nearly cleared eight meters in the men’s long jump, with his second attempt hitting 7.97m (26-1 ¾). It’s his best-ever mark at the conference meet, and it comes in his sixth and final SEC Championships appearance.

The senior from Toulouse, France, is now a two-time SEC medalist including the silver medal he won in 2018 at the league’s indoor championship. He’s the first Gamecock in history to score in the men’s long jump at three different SEC Outdoor Championships, and he’s the first Carolina men’s long jumper to finish on the outdoor podium since 2006.

Coquillaud-Salomon took part in her first collegiate heptathlon at the conference meet, and the results were outstanding. The freshman finished with 5,066 points, the seventh-highest total in school history, and she placed eighth on Friday to net a point in her first postseason appearance.

Womble’s first collegiate decathlon also resulted in a scoring effort for the Gamecocks. The sophomore put points on the board in the heptathlon at the SEC’s indoor meet, and he did the same on Friday, finishing eighth with 5,769 points. His best result came in the javelin, where he set a new personal best at 47.28m (155-1).

The Friday evening preliminary session started with men’s 110m hurdles, and senior Isaiah Moore was once again on point. Moore recovered from a slow start to win his heat with a time of 13.49, the third-best mark of the night overall. A two-time SEC bronze medalist, Moore competes in his last conference final Saturday at 5:45 p.m. CT.

Two Gamecocks made it through to the final of the men’s 400m. Quincy Hall, the 2019 indoor champion at the distance, was the top qualifier with a time of 45.40. Senior Arinze Chance will join Hall for his first-career conference final; he was the ninth and last qualifier with a mark of 46.69. The duo goes for SEC gold Saturday at 6:05 p.m. CT.

South Carolina also qualified a pair of finalists in the women’s 400m, with the championship race scheduled for 6:15 p.m. CT on Saturday. Wadeline Jonathas dominated the second heat, grabbing an automatic qualifying spot with a time of 51.81, the second-best mark of the night. Aliyah Abrams ran the evening’s seventh-best time, 52.58. It’s the third-career SEC final appearance for Abrams, who won silver indoors at the 2019 NCAA Championships, and the first individual SEC final for Jonathas.

Overall, the Gamecocks have five scoring efforts through two days in Fayetteville. Sophomore Heather Stone finished fourth in the women’s 10000m on Thursday night, the best performance by a Gamecock in the event since 2000.

In the last event of the night, Kelsey Larkin finished her 2019 season with a new mark on the school’s all-time top-10 list in the 3000m steeplechase. Her time of 11:14.38 ranks third in program history.

“I’m very proud of (Eric and Yann). Getting top three in the SEC and being All-SEC is a tremendous honor. This is the toughest conference in the country, and to have those two young men come through for their team is really good. It gives us a chance to meet our goals here, so I’m just proud of those two. Both of them came through.”

“Our kids are doing the things that we expected them to do. Our coaches brought them through. They’ve trained them well, and they’ve got them here prepared at the meet. Our kids are coming through. They’re living up to expectations. I’m proud of them, I’m proud to be a Gamecock, and I’m glad those kids are excited about the University of South Carolina.” – Head Coach Curtis Frye

The 2019 SEC Outdoor Championships conclude Saturday, with action in Fayetteville beginning at 12:30 p.m. CT. SEC Network coverage picks up at 5 p.m. CT, and in addition to the team titles, 26 event championships are on the line.