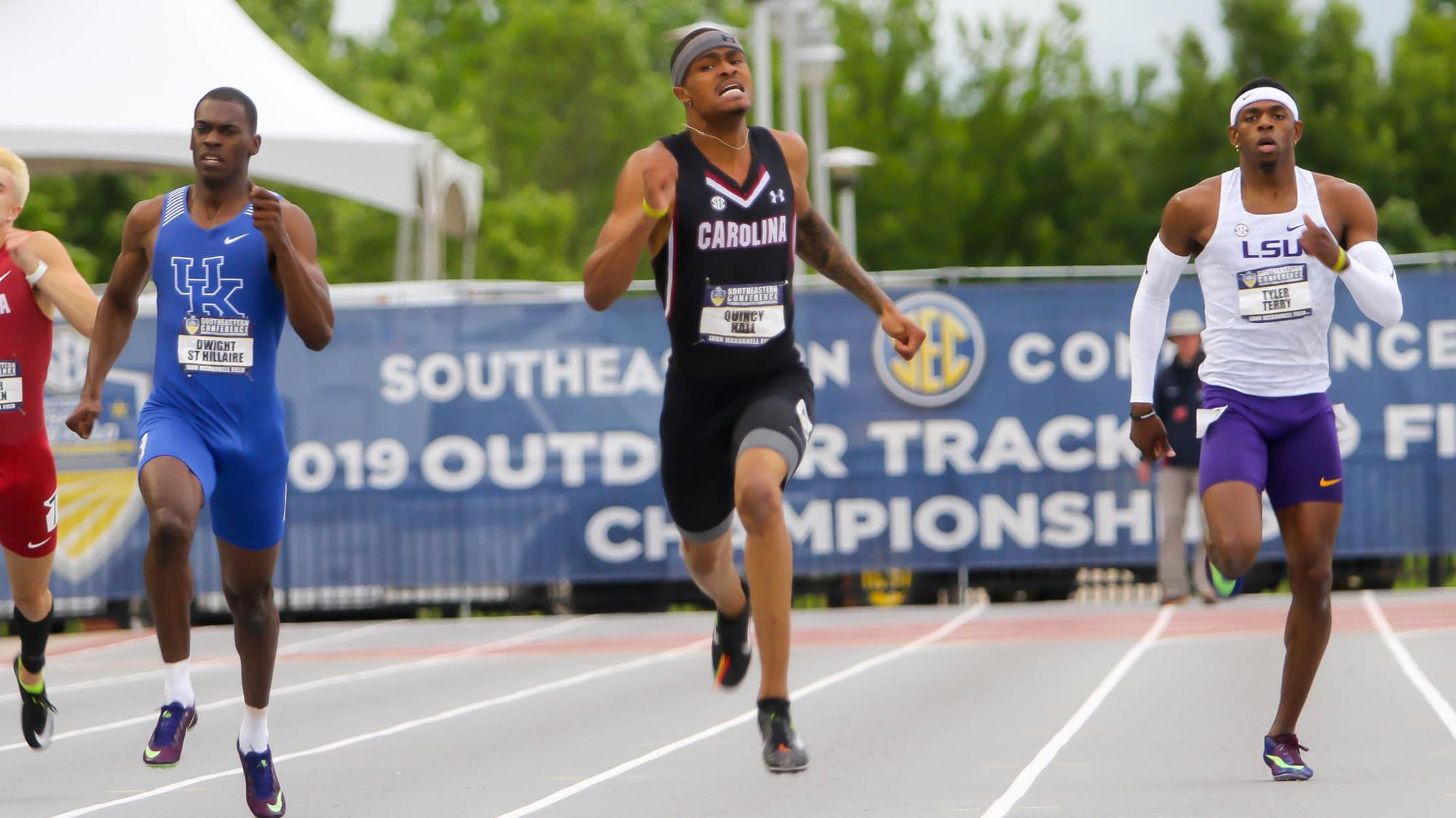 FAYETTEVILLE, Ark. — Quincy Hall’s magical 2019 season continued on Saturday night as he won the men’s 400m title at the SEC Outdoor Championships. Hall set a John McDonnell Field facility record with his mark of 44.60, and he became the first Gamecock in history to win the SEC men’s 400m title both indoors and outdoors in the same season.

Hall was out of the blocks quickly and led every stride of the 400m final. His time of 44.60 is just .07 off his South Carolina record mark of 44.53, set last month at Sheila & Morris Cregger Track. He’s the second Gamecock to win an SEC title in the outdoor 400m and the first since Otis Harris in 2003.

Overall, Hall’s SEC outdoor title is the 27th in South Carolina men’s track & field history. He’s the sixth student-athlete in the last decade to win the indoor and outdoor 400m SEC crown in the same season, and he’s the first Gamecock to collect an individual outdoor SEC title since 2010.

📺 It’s been a legendary 2019 for Quincy Hall… and there’s more to come. pic.twitter.com/B5Fwd4Y8GA

Overall, the Gamecocks finished 10th in the men’s competition, with 41 points, and 13th in the women’s race, with 23 points. LSU was victorious in the men’s meet, and Arkansas defended their home track to win on the women’s side.

The Gamecocks got their first points of the evening from the women’s 4x100m relay. Stephanie Davis, Aliyah Abrams, Amecia Pennamon and Jonathas finished seventh, running a time of 44.18. It’s the second season in a row the Gamecocks have scored in the event, with Davis and Pennamon running on both squads.

Jonathas ran the best race of her life and one of the finest 400m performances in South Carolina history to win the bronze on Saturday. Her time of 51.19 is the fifth-best mark in program history and Carolina’s best time in the event since NCAA champion Natasha Hastings ran 49.84 in 2007. Her time ranks fourth in the NCAA and fifth in the world this season.

Jones repeated his bronze medal-winning effort from 2018, running a season-best 1:48.09 to stand on the 800m podium for the second-straight season. He’s the third Gamecock in history to finish on the conference podium in consecutive men’s outdoor 800m races and the first to accomplish the feat since 2002. With his new season best, he improves to 21st on the 2019 NCAA leaderboard.

Moore entered Saturday night determined to write another award-winning chapter in his final SEC Championships race. The senior did not disappoint, winning the bronze medal with a time of 13.42, the third-best mark of his collegiate career. It’s his third conference bronze, including third-place finishes in the 110mH in 2017 and the 60mH in 2019.

Abrams ran an individual SEC final for the first time since 2016 and finished fifth in the 400m. Her time of 51.92 was a new personal best and the ninth-best mark on the all-time South Carolina top-10 list. It’s also the seventh-fastest mark in the NCAA this season.

Arinze Chance joined Hall in the men’s 400m final. He finished eighth, running 46.93 to record his first-career scoring effort at the SEC meet.

Carolina’s men finished the night with a fourth-place result in the 4x400m relay, their highest placement in the event since 2015. Chance, Ty Jaye Robbins, Hall and Jones turned in a time of 3:04.43, their second-best time this year.

In the final event of the meet, the Gamecocks placed fourth in the women’s 4x400m relay. Davis, Abrams, Tatyana Mills and Jonathas crossed the line in 3:31.24 for the program’s best finish in the event since 2016.

“Quincy never ceases to amaze us. That was a great run, and he really didn’t have a challenger in the race. Arinze got in there and scored for us, so our guys in the quarter lived up to their level. Our women got two personal bests. Wadeline ran 51.19 and Aliyah 51.92. Those are excellent runs, and it’s a tribute to our training and our program.”

“Our senior kids are awesome. I’m really proud of the fact that we’ve got two kids (Otis and Isaiah), one from South Carolina, the other from North Carolina; kids that have a great following around the Carolinas. They come from good track states, and they’re national-level kids, and to come on and score in the best conference in the country should have our university proud.”- Head Coach Curtis Frye

The national postseason begins May 23-25 with the NCAA East Regional Preliminary Round in Jacksonville, Fla. The list of Gamecocks who have officially qualified for the meet will be announced Thursday, May 16, no later than 1 p.m. ET.