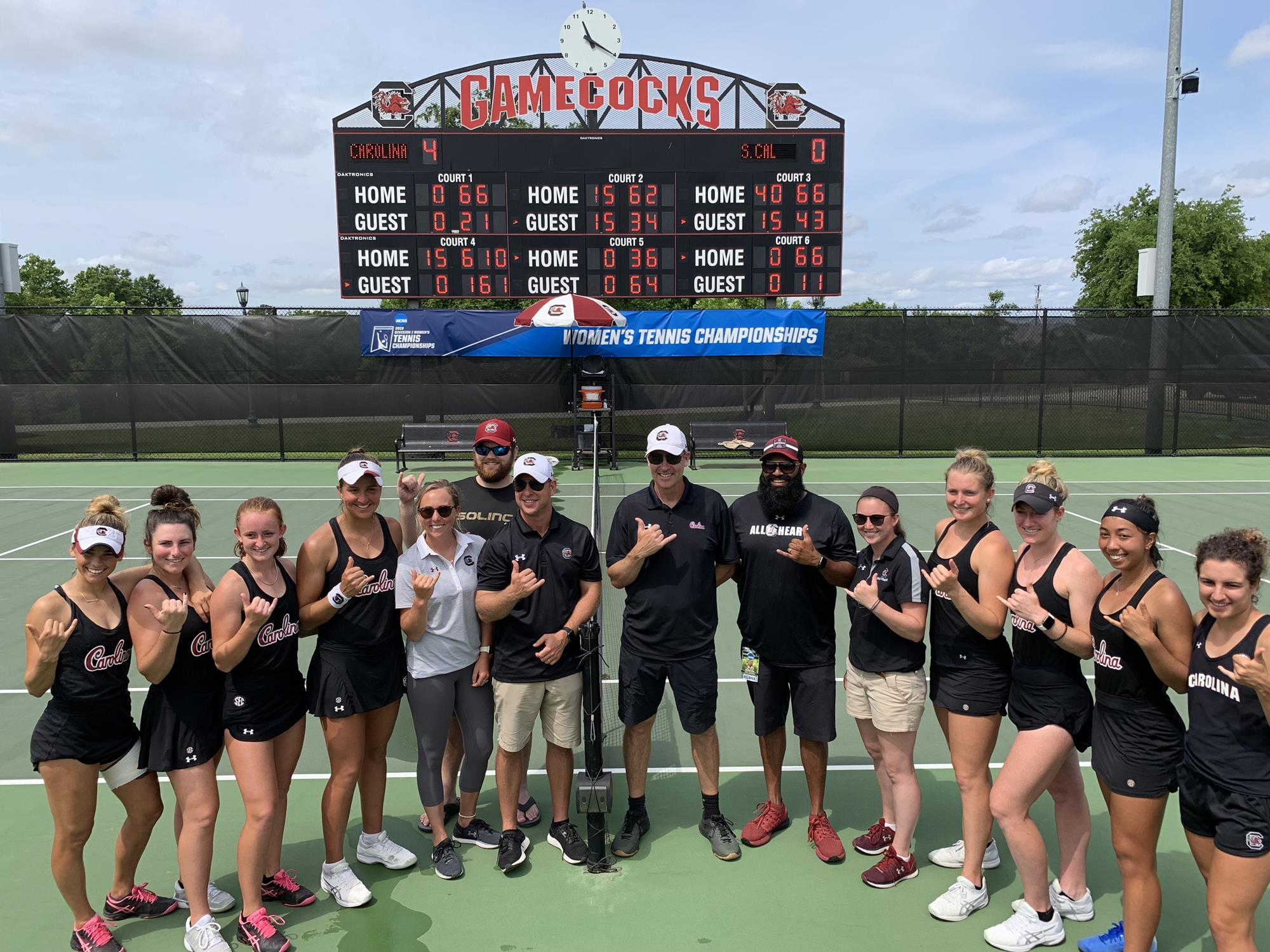 No. 4 Gamecocks are Quarterfinals Bound

COLUMBIA, S.C. – The South Carolina women’s tennis team is headed to the quarterfinals of the NCAA Championships after a dominating, 4-0, victory over Southern Cal on Saturday morning at the Carolina Tennis Center.

“They fought hard, but I think we were just a little too tough (Saturday),” Epley said. “Ingrid (Martins) and Mia (Horvit) committed to being aggressive. Rachel (Rohrabacher) getting off the court early was really big, putting another point on the board. You get two on the board and you can see the finish line and she did that in pretty short order.

“Across the board I think we did pretty well. Ingrid came out and didn’t back off at all. Mia found her game. When we’re rolling in those spots it’s really tough (to beat us).”

The Gamecocks wasted no time getting down to business. Up first in doubles, No. 3 Martins and Horvit sped to a dominating, 6-1, victory over the nation’s No. 1-ranked doubles team in Angela Kulikov and Rianna Valdes on court one.

At the No. 2 spot, No. 39 Megan Davies and Rohrabacher fell behind Becca Weissmann and Danielle Willson, 4-1. Finding their groove, the Gamecocks took three-straight games, tying it, 4-4. They then went down, 5-4, but were not going down without a fight. They claimed three more games, winning the match, 7-5, and clinching the doubles point for South Carolina.

Needing just three singles matches to seal a spot in the quarterfinals, Rohrabacher stormed through Weissmann on court six. Playing identical sets, Rohrabacher dropped the first game in each set, but then took the next six, coming out on top, 6-1, 6-1. Rohrabacher’s win put Carolina halfway to the victory, 2-0.

No. 4 Martins and No. 81 Horvit were playing next to each other at the No. 1 and 3 spots, respectively, and both a point away from winning their matches. Finishing mere seconds ahead of Martins, Horvit gave the Gamecocks a big, 3-0, advantage. In her first set against Ana Neffa, Horvit battled back from deficits three times, claiming the final three games of the first set for a, 6-4, victory. Horvit controlled the second set, taking a, 4-2, lead after serving an ace. After that, Horvit did not look back, finishing out her, 6-4, 6-2, win.

Right after hearing Horvit celebrate her win, Martins was victorious on court one. Martins closed out her first set with an ace for a, 6-2, win against No. 51 Selma Ewing. Not wasting any time in the second set, Martins downed Ewing, 6-1, clinching the overall match for South Carolina, 4-0, and officially punching the Gamecocks’ ticket to the quarterfinals.

Next up, Carolina takes on No. 5-ranked Duke on Friday, May 17, in Orlando, Fla., at a time to be determined.