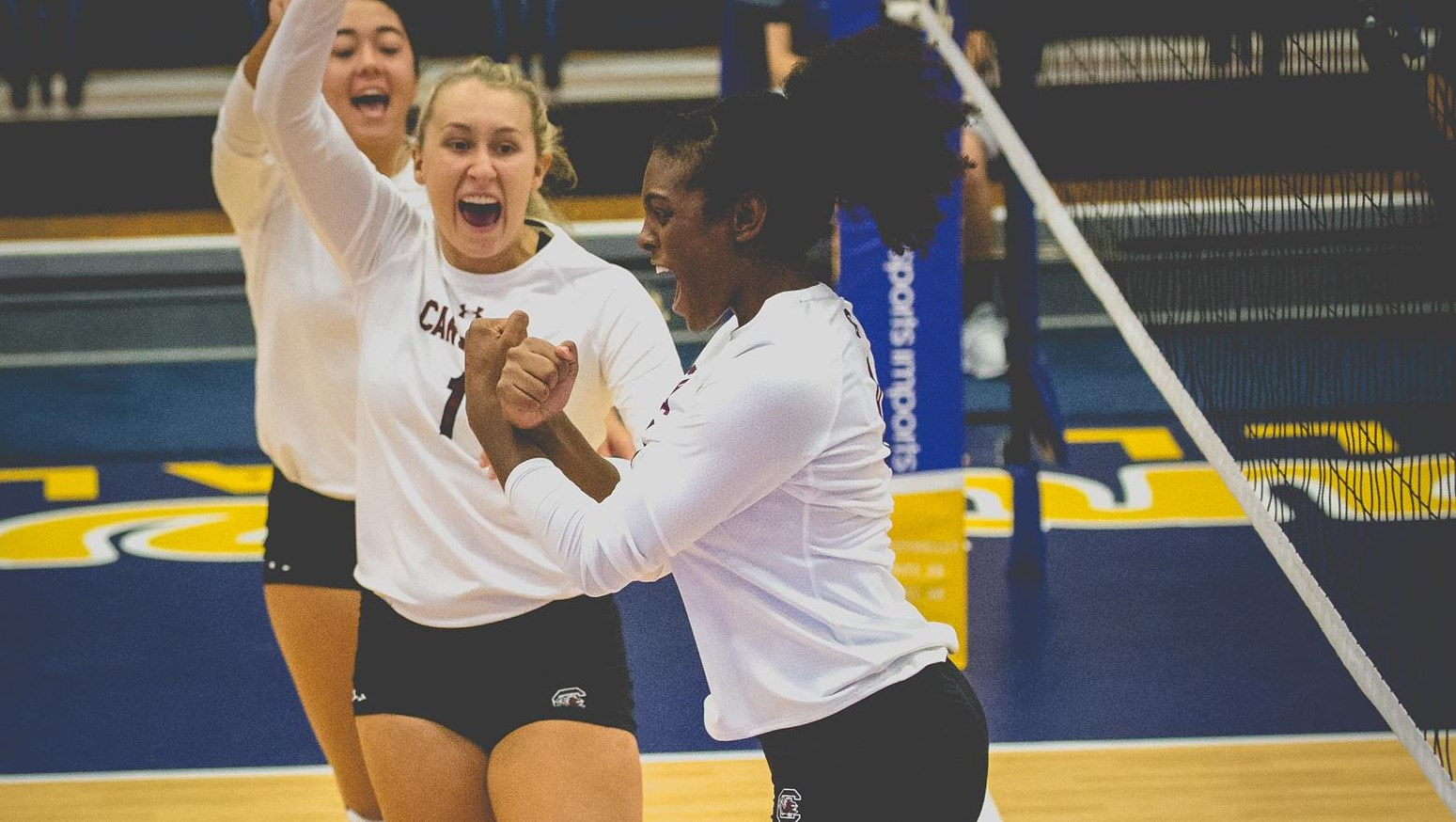 ORLANDO, FLA. – Week two of the season brings another talented field of opponents for South Carolina volleyball, which travels to Orlando, Fla. for the UCF Challenge this weekend. The Gamecocks (1-2) play the host Knights (2-1) Friday at 7:30 p.m., Kansas (2-0) on Saturday at 4 p.m. and Sunday against Albany (1-2) at 1 p.m.

QUOTABLE: TOM MENDOZA
Thoughts on the team’s weekend at the Panther Challenge
I think we got better as the weekend went on and we learned what it takes to be successful and beat good teams, we just need to be a little better at it. This has the potential to be a strong group, we just need to string together better high-level series of play and when that level drops we need to respond and recover a little bit faster. The potential is there, and it’s a group with not just a lot of potential physically but with the dynamics of the group – we’ve got good leaders and team chemistry and when those things come together I really like the potential of this group.

SCOUTING UCF
The Knights are 2-1 after a solid opening weekend on the road at the Rebel Invitational, hosted by Ole Miss. UCF defeated Iowa State and the host Rebels but did lose to Rice. Last season, the team went 18-0 in American Athletic Conference action to win the conference title and host the opening rounds of the NCAA tournament before being upset by FGCU in the first round. Picked to finish at the top of the AAC again this year, the Knights are led by sophomore McKenna Melville, who garnered AVCA All-America honors and was the AAC’s Freshman of the Year. She led the team with 4.51 kills per set and also pitched in 3.62 digs per set, finishing with 22 double-doubles in 31 matches. Fellow left side Kristina Fisher (3.02 kills/set) and opposite Ann-Marie Watson (2.28 kills, 1.10 blocks/set) also joined Melville on the preseason all-conference squad.

SCOUTING KANSAS
Kansas is a hungry team in 2019, after the Jayhawks found themselves on the wrong side of the NCAA tournament bubble in 2018 following postseason runs in the previous six seasons. The Jayhawks return nine from last year’s team and add six newcomers to the mix, but will need to replace star left side hitter Jada Burse this season. Returning are the second- and third-ranked attackers in kills from last season, Ashley Smith (2.94 kills per set) and Zoe Hill (1.95 kills/set). Defensively, libero Allie Nelson (3.65 digs/set) returns, and the middle blocker tandem of Hill and Rachel Langs – who alone combined to average 2.54 blocks per set last year – giving the Jayhawks a solid foundation for success this fall.

SCOUTING ALBANY
First-year head coach Josh Pickard inherited a Great Dane team that finished second in the American East Conference last fall, and with almost the entire roster back this year, hope are high with Albany. The team went 1-2 in the opening weekend of action, but had senior Akuabata Okenwa and freshman Malea Stanton honored as conference players of the week for their contributions. Okenwa is the team’s leading returner, averaging 3.12 kills per set as a junior, but the Great Danes bring back all five of its leading hitters from last season. Running the offense will be the freshman Stanton, who averaged double-digit assists per set in the opening weekend to earn the conference’s Rookie of the Week nod.

ROBINSON AND SHIELDS RETURN AFTER ALL-CONFERENCE SEASONS
For the first time in 16 years, South Carolina put multiple student-athletes on the conference’s postseason team, chosen by the league’s 13 coaches, with Mikayla Robinson and Mikayla Shields making the cut.

It was Robinson’s first all-conference honor but second postseason recognition, as the junior made the all-freshman team in 2017. Last year, Robinson led the Gamecocks in blocks (96 total, 22 solo) and hitting percentage (.298) during the regular season. Shields is now a back-to-back All-SEC honoree, making her the ninth Gamecock to do so since South Carolina joined the conference in 1991. She led the team in the regular season with 3.22 kills per set and hit .272 despite leading all Gamecock hitters with 837 total attacks. She wasn’t just solid as an attacker, as she also led the team with eight double-doubles, ranked second on the team with 2.38 digs per set, and reached a career high for service aces (26).

KOEHLER SETTING HER SIGHTS ON SC RECORDS
Senior Courtney Koehler will guide the team’s offense for a third season in 2019, and her production has her leaping up the program’s record book. The Asheville, N.C. native moved into the program’s all-time top 10 for career assists and she enters her final season sitting seventh overall in Carolina’s 46-year history. Koehler’s 2018 total of 1,121 assists put her fourth in for most in a season for the rally-scoring era, giving her two of the top four marks. In the opening weekend of the season, she went over 2,500 career assists and enters week two 236 assists from matching the program’s rally-scoring era record, held by Taylor Bruns (2009-12).

With her departure, the team is looking for who can help fill her shoes. Of the six starters returning this year (Edwards, Koehler, McLean, Robinson, Shields, Vastine), none have a career ace total above 60, and after Ezell’s 75 aces in 2018 the next closest teammates in the category were Shields with a career-high 29 and Koehler with 21.

In the opening weekend of the season, South Carolina was on the wrong side of both serving statistics – aces and errors. Over its three matches, the team was out-aced 20-6 and committed four more errors on serve (25-21).

GAMECOCKS PREP FOR TOUGH NON-CONFERENCE
The Gamecocks are embarking on an ambitious schedule to follow up last year’s NCAA tournament run. Five of the team’s 12 non-conference opponents are 2018 tournament participants, four finished in the RPI top 25, six won 20 or more matches, and the group as a whole went a combined 254-117 (.685).