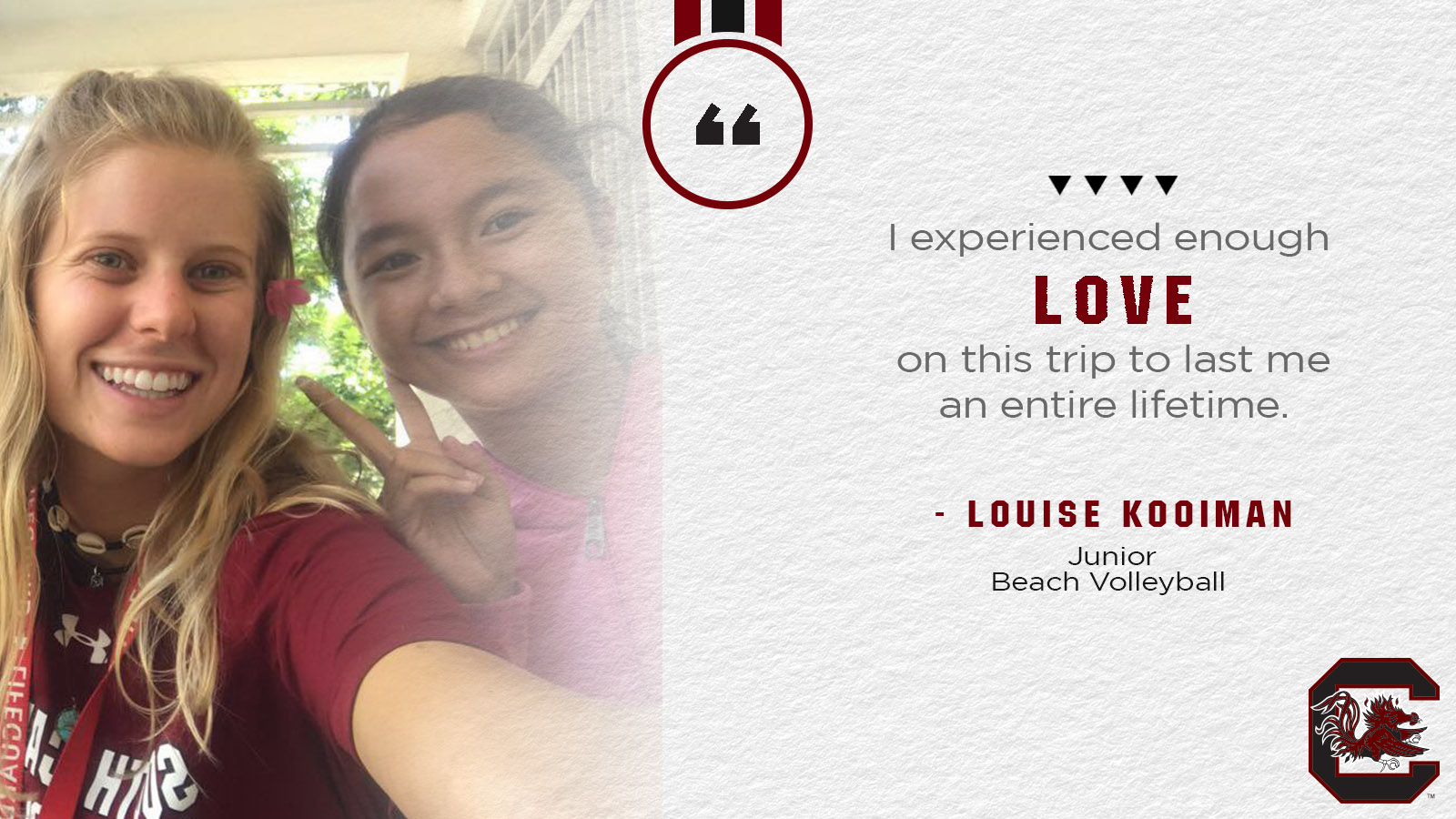 South Carolina beach volleyball student-athletes took a break from the sand and spent part of their summer making a difference in the lives of young people in Vietnam. Juniors Louise Kooiman and Quinn Fulton took part in the Coach for College program, which immersed them for three weeks in late May and early June in rural areas of the country while teaching and coaching under-privileged children.

“This was a perfect opportunity for me to take my classroom skills, hands on, especially in another country and get a preview of what I’ll be doing in the future,” said Kooiman, who is a middle level education major and taught the children math and volleyball. 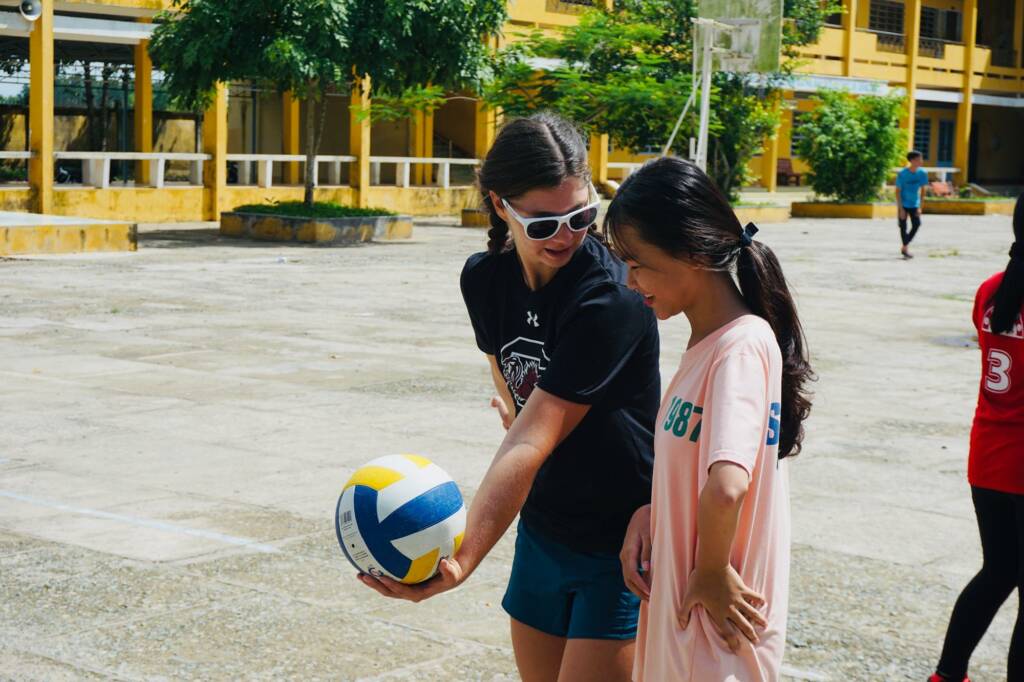 “I came back with this new level of gratitude and this new capacity to love more and allow myself to love other people more.”

While both were a little nervous prior to leaving, mostly because of the language barrier, the Gamecocks were welcomed with open arms into the community.

“Initially they were a little bit shy,” Fulton said of the children. “We were a bunch of tall, blonde foreigners. After a few days, they really just fell in love, and I just fell in love. They were super-excited every day at 7 a.m. until 5 p.m. just to hang out with us.

“The connections I made with the kids so quickly surprised me. I honestly thought it would take so much more time, effort and language, but within a couple days we were able to make such meaningful, profound connections.”

“The language barrier was definitely something we had to get used to,” Kooiman said. “We had a few funny mishaps with translating, but working with our Vietnamese coaches, they were really able to help us out. We learned the dynamic of the classroom pretty easily. Mostly, I relied on nonverbal communication and social cues. When a kid comes up to you smiling with a hug, you know exactly what they’re trying to say.”

“They’re so open and welcoming. I was told, ‘I love you’ at least 50 times per day. That’s not something you see here. So that surprised me in a good way.”

“The stuff they would get happy about and excited about made me think I’m going to be more grateful in my life.”
– Quinn  Fulton

In addition to educating the children and teaching them some life skills, the student-athletes were able to see how the Vietnamese lived, and how much different their world was.

“We got to visit a few of the kids houses. It was definitely different than what we’re used to here,” Fulton said. “They were big open-air houses and big families live in the houses together. It was cool to experience a totally different type of culture than I was used to, and to see how really excited the kids were to show you their house and show you what they had.

“It made me appreciate the idea of genuine joy without attachment and being able to enjoy and be so grateful about life without needing all this material stuff. The stuff they would get happy about and excited about made me think I’m going to be more grateful in my life.” 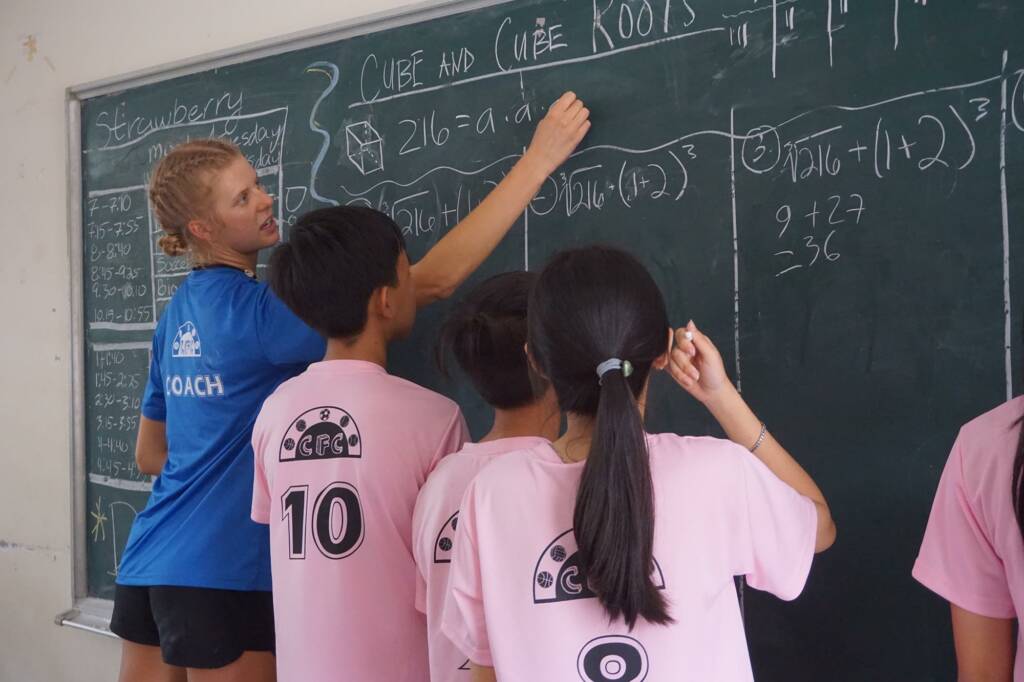 “One of the teachers at our school told us that they had not seen a foreigner in about seven years,” Kooiman said. “I thought that was very impactful that we were able to come into this community and make such a large impact in these kids’ lives. They don’t see people like us every day, so to be one of those people was an amazing opportunity. I was also told that the average income for the area we were in was around $500 per year. Although the price of living is a lot less in Vietnam, that’s a huge transition for us knowing how they live off of mostly resources of the land.

“We were able to listen to some of their stories about what was going on in their lives, and some of those stories truthfully broke my heart. I would see this kid coming into the classroom every day, smiling, and getting excited about a little stamp I put on their paper. It’s the little things with them. Then they tell you all the things they’ve gone through, and it’s like two different kids. It was truly beautiful and amazing to see that these kids were able to go through so much and still come into the classroom everyday with smile on their face.”

Fulton and Kooiman are greatly appreciative of the opportunity to share and teach, while also learning a lot from their experiences. Despite the different culture, language, food and traditions, the Gamecocks said the hardest part of the trip was leaving the children with whom they had bonded.

“I still cry when I think about the day I had to leave,” Fulton said. “It was extremely emotional with the kids, with us, and with our fellow Vietnamese coaches. Just knowing that they’re half a world away and it’s going to be really difficult to see them, but the director told us we have to leave with a sense of sadness but also with a sense of happiness because you got the chance to do this. Because you’re so sad, it’s means you made such a connection.

“Today, I was talking back and forth with one of my kids (via social media). Those are deep, meaningful connections that I could have for the rest of my life.”

“At our camp, we had to have adults move the kids out of the way of the bus when we were leaving because they were about to throw themselves in front of the bus to stop us from leaving,” Kooiman said. “Luckily we live in an age now where we have social media. Even though there’s an 11-hour time difference from here, we can still message them on Facebook, and we can still have those connections. Leaving was one of hardest things.

“I experienced enough love on this trip to last me an entire lifetime. That’s something that’s pretty special.”