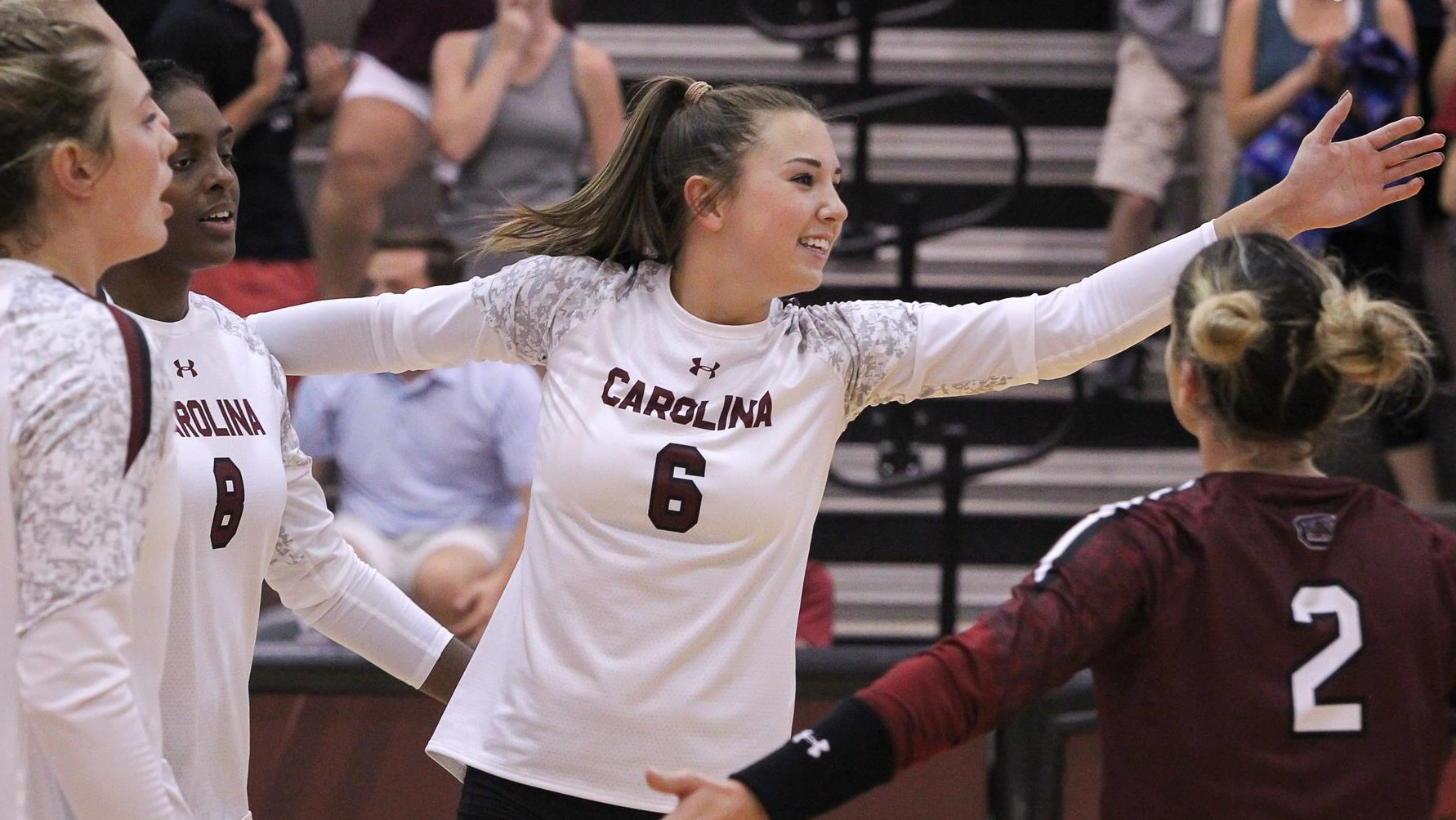 The Gamecocks face the Tigers Thursday night and Wisconsin on Friday

COLUMBIA, S.C. – South Carolina volleyball wraps up a stretch of six matches in seven days when it heads to the upstate for the two day Clemson Classic tournament. The Gamecocks, winners of three straight, will face the host Tigers (5-2) on Thursday night at 7 p.m. and No. 9 Wisconsin (2-2) Friday night at 6 p.m. The Thursday night match against Clemson will air on the ACC Network Extra stream. South Carolina 4-3 is coming off a 3-0 win against Charlotte Tuesday night, and spent four days in Orlando, Fla. for the UCF Challenge last weekend.

QUOTABLE: TOM MENDOZA
Thoughts on the team’s defensive success at the UCF Challenge
Our quality of play has just gotten better each match, and that’s allowed us to get more into the mindframe of how to stop the other team. When we’re not taking care of our side, it’s hard to put your focus on scouting reports and (blocking) setups. Our ball control has gotten better, we’ve been playing a little bit cleaner and that’s allowed us now to get our focus to go compete and shut down the other team.

SCOUTING CLEMSON
The Tigers are poised to have a breakout 2019 season, welcoming back top attacker Kaylin Korte from injury to join Brooke Bailey on offense. Korte transferred from Illinois ahead of 2017, but missed the entire 2018 campaign with a knee injury. She has shown no signs of rust so far in her comeback, leading the team with 3.43 kills per set and pitching in 2.70 digs per set on defense. Her return has been a boost to a team that won 19 matches last season, thanks to the contributions of Bailey (2nd team All-ACC in 2018) and Solei Thomas (2.89 kills/set, .288 hitting percetnage in 2018). Already this season, Clemson has marquee wins over Georgia and mid-major power Kennesaw State, and is 5-2 overall with a 3-0 mark at home.

SCOUTING NO. 9 WISCONSIN
The Badgers will come into the weekend with an extra edge, coming up on the losing end of two top-20 matchups last weekend at home. Wisconsin still check in at number nine in the AVCA coaches poll this week, and features one of the best middles in the nation leading attack that ranks 15th nationall for kills per set and 29th in hitting percentage. Dana Rettke spent her summer with the U.S. National Team and rolled that experience into the fall, posting a .504 hitting percentage and a team-high 4.53 kills per set through four matches. The 6-foot, 8-inch junior also ranks nationally with 1.40 blocks per set, spearheading a defense that ranks 14th in the country for blocks per set (2.87). Another Badger to watch is redshirt junior Molly Haggerty, who comes into the weekend averaging 3.40 kills per set from the left pin and had a career-high 16 kills in the team’s most recent match, against No. 17 Baylor.

EDWARDS NAMED SEC DEFENSIVE PLAYER OF THE WEEK
Senior Claire Edwards’ efforts over three weekend matches earned her Defensive Player of the Week honors from the Southeastern Conference, the league office announced on Monday. It is the Columbia, S.C. native’s first weekly honor from the SEC.

Edwards spearheaded a breakout weekend from the South Carolina defense, putting down 17 total blocks in 10 sets at the UCF Challenge tournament in Orlando, Fla. She set a personal best with eight total blocks in a four-set win against Kansas (two solo, six assists), guiding a defense that posted the fourth-highest total for blocks in a match in the rally-scoring era, with 18. Capping the weekend, Edwards had six more blocks in the sweep of Albany. South Carolina held Albany to a .022 hitting percentage in the match, the lowest allowed to an opponent since 2016. It was not just her defensive prowess that helped the team this weekend, though, Edwards also had eye-popping efficiency on offense in the three matches. She averaged 2.30 kills per set out of the middle and hit .463, committing just four attack errors total for the tournament.

Currently, Shields ranks seventh overall for career kills (with 1,218) in the overall program record book, and third among rally-scoring-era attackers. She is 75 kills away from passing hall of famer Heather Larkin (1994-97) and entering South Carolina’s all-time top five.

KOEHLER SETTING HER SIGHTS ON SC RECORDS
Senior Courtney Koehler will guide the team’s offense for a third season in 2019, and her production has her leaping up the program’s record book. Koehler’s 2018 season total of 1,121 assists put her fourth in for most in a season for the rally-scoring era, giving her two of the top four marks. Against Charlotte on Tuesday night, she surpassed Taylor Bruns’ record for most assists in the rally-scoring era (since 2001), now sitting at 2,864 for her career. Scratching the top five marks from the sideout era will be a challenge, but Koehler is now 373 assists from jumping Jodi Thompson (1991-94) for the number five spot in the program’s all-time history.

With her departure, the team is looking for who can help fill her shoes. Of the six starters returning this year (Edwards, Koehler, McLean, Robinson, Shields, Vastine), none have a career ace total above 60, and after Ezell’s 75 aces in 2018, the next closest teammates in the category were Shields with a career-high 29 and Koehler with 21.

In the opening two weekends of the season, South Carolina was on the wrong side of both serving statistics – aces and errors. Through seven matches, the team has been out-aced 33-23 and committed 12 more errors on serve (59-47).

GAMECOCKS PREP FOR TOUGH NON-CONFERENCE SCHEDULE
The Gamecocks are embarking on an ambitious schedule to follow up last year’s NCAA tournament run. Five of the team’s 12 non-conference opponents are 2018 tournament participants, four finished in the RPI top 25, six won 20 or more matches, and the group as a whole went a combined 254-117 (.685).