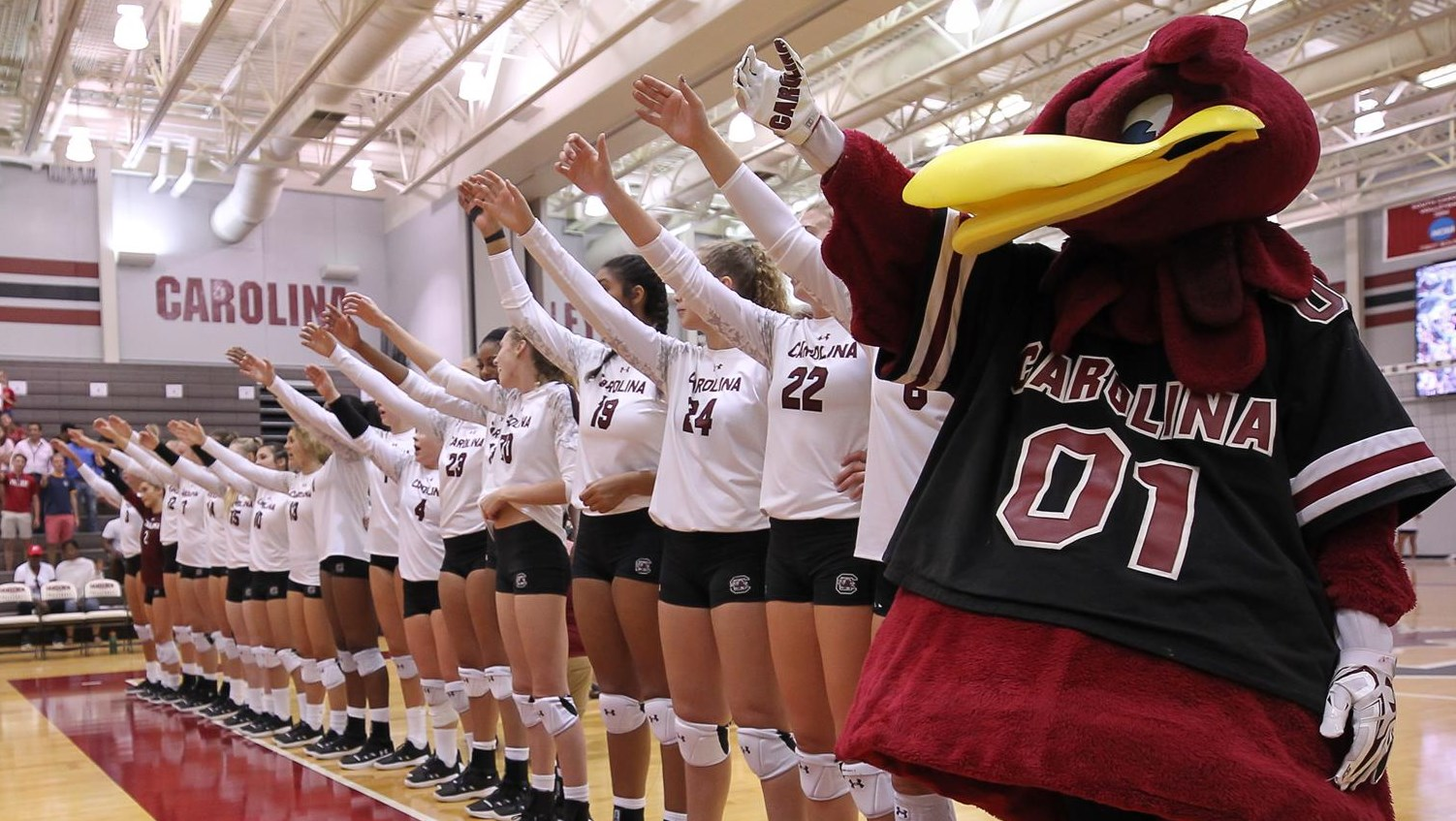 COLUMBIA, S.C. – South Carolina volleyball closes out its non-conference schedule this weekend with three matches. The team hosts Maryland on Friday night at 6 p.m. and hosts two matches on Sunday – at noon against Kennesaw State, and 6 p.m. against High Point. The Gamecocks enter the weekend with a 5-4 overall record, picking up a pair of wins last week against Charlotte and Clemson.

Single-game tickets are on sale this weekend, $5 for adults and $3 for youth. Fans can also purchase season tickets at the General Admission rate for adults ($25) or youth age 17 and under ($10), or the VIP season ticket. Contact the South Carolina Ticket Office at 800-4SC-FANS (800-472-3267) or CLICK THIS LINK for more information.

A reminder, students attending matches at the Carolina Volleyball Center should note that their entrance to the facility has changed for 2019. Instead of entering through the Park Street side of the gym, students should now enter at the top of the building, located by the Blossom and Assembly Street intersection. Ticket holders should still plan to enter via the Park Street entrance.

Please refer to the PARKING MAP for a bird’s-eye view of the Carolina Volleyball Center and surrounding areas.​​​​​​​

QUOTABLE: SENIOR MIKAYLA SHIELDS
On finishing her career undefeated against Clemson
It means so much, in-state rivalries are such an important part about being a student-athlete. You get to represent yourself but your entire school, and we have something special with Clemson. To come in as a senior knowing we have done something amazing and beating them all four years from the time we were freshmen and closing out that series is an amazing feeling.

SCOUTING MARYLAND
Maryland continues to trend up under second-year coach Adam Hughes, entering the weekend with a 6-3 overall record after winning 18 matches and playing their way on to the postseason NCAA tournament bubble with nine wins in the Big Ten. So far this year, the Terps are 6-3 and rank in the top 50 nationally in aces per set (2.07, 11th), blocks per set (2.45, 50th) and opponent hitting percentage (.160, 22nd). Individually, Erika Pritchard remains one of the top all-around pins in the conference, posting 3.71 kills per set while hitting an efficient .284. Her offense has been complimented well by the duo of Katie Myers (1.98 kills/set, .412 hitting percentage) and Rebekah Rath (2.71 kills/set). On defense, the team has five different blockers with 25 or more total blocks so far through nine matches, led by Myers’ 56.0 blocks that ranks her fifth overall in the country

SCOUTING KENNESAW ST.
Kennesaw State has long been one of the top mid-major programs in the country, and the trend continues in 2019. The Owls are 7-3 overall and are coming off their best win of the season on Tuesday when they went on the road and beat Alabama in four sets. It was the team’s second win over a “Power Five” opponent, having also beaten Georgia Tech two weeks prior. The offense ranks 23rd in the country for aces per set (1.86) and also is 49th in kills per set (13.46). Five different hitters average two or more kills per set, led by junior Lauren Chastang’s 3.70 average. Though Kennesaw State doesn’t rank high in blocks, its back-line defense has been stout, averaging 14.42 digs per set to hold opponents to just a .191 hitting percentage.

SCOUTING HIGH POINT
Two years removed from the Tom Mendoza’s tenure as head coach, High Point remains a stout mid-major program under coach Ryan Meek. The Panthers have been ambitious with their schedule this season, playing big matches already against TCU, VCU, Nebraska, Loyola Marymount and Denver. HPU will come to Columbia for one match Sunday evening after playing three matches on Friday and Saturday at Davidson; Sunday’s match caps a stretch of nine matches in nine days for High Point. To spell the fatigue, the Panthers have seen 15 different players start two or more matches and no one player has started in more than five matches entering the weekend. Freshman Annie Sullivan has been the team’s most consistent producer on offense, averaging 3.11 kills per set with a .288 hitting percentage over 28 sets, 14 more kills than the second- and third-ranked kill producers on the roster combined. On defense, libero Abby Bottomley has been a standout, averaging 4.72 digs per set and a team-high 111 serve receptions in 29 total sets played.

EDWARDS ENJOYING STRONG START TO SENIOR CAMPAIGN
Year four has started well for middle blocker Claire Edwards, who is on an early pace for a career year on offense and defense for South Carolina. Through nine matches, Edwards already is averaging highs for kills (1.68 per set), points (2.55), aces (0.23), blocks (1.16) and hitting percentage (.393). Her efforts were recognized by the SEC on Sept. 9, when she earned Defensive Player of the Week honors from the conference after putting down 17 total blocks in 10 sets at the UCF Challenge tournament. It was not just her defensive prowess that helped the team in Orlando, though, Edwards also had eye-popping efficiency on offense in the three matches. She averaged 2.30 kills per set out of the middle and hit .463, committing just four attack errors total for the tournament.

Currently, Shields ranks seventh overall for career kills (with 1,243) in the overall program record book, and third among rally-scoring-era attackers. She is 50 kills away from passing hall of famer Heather Larkin (1994-97) and entering South Carolina’s all-time top five.

KOEHLER SETTING HER SIGHTS ON SC RECORDS
Senior Courtney Koehler will guide the team’s offense for a third season in 2019, and her production has her leaping up the program’s record book. Koehler’s 2018 season total of 1,121 assists put her fourth in for most in a season for the rally-scoring era, giving her two of the top four marks. Against Charlotte last Tuesday, she surpassed Taylor Bruns’ record for most assists in the rally-scoring era (since 2001), now sitting at 2,920 for her career. Scratching the top three marks from the sideout era will be a challenge, but Koehler is now 317 assists from jumping Jodi Thompson (1991-94) for the number five spot in the program’s all-time history.

With her departure, the team is looking for who can help fill her shoes. Of the six starters returning this year (Edwards, Koehler, McLean, Robinson, Shields, Vastine), only Shields and Koehler have a career ace total above 60, and after Ezell’s 75 aces in 2018, the next closest teammates in the category were Shields with a career-high 29 and Koehler with 21.

Through nine matches, South Carolina is on the wrong side of both serving statistics – aces and errors. Entering Friday, the team has been out-aced 58-39 and committed 21 more errors on serve (80-59).

GAMECOCKS BATTLE THROUGH TOUGH NON-CONFERENCE
The Gamecocks are embarking on an ambitious schedule to follow up last year’s NCAA tournament run. Five of the team’s 12 non-conference opponents are 2018 tournament participants, four finished in the RPI top 25, six won 20 or more matches, and the group as a whole went a combined 254-117 (.685).